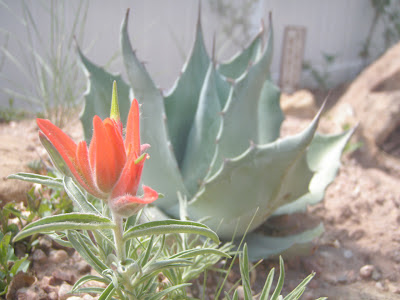 (Castilleja integra, Agave ovatifolia, the latter being a speicies discovered in Mexico within the past 30 years.)

Yes, I'm going to follow the post "Done" with "Fail."  An epic fail, as we youngsters like to say while we watch videos of skateboarders waving at the camera only to wrap themselves under prior-unseen wires or fences in comical ways.  Done and Fail: Two consecutive evaluations of the same thing- this Desert Crevice Garden.

There were certain mistakes I knew I was making, and decided for one bad reason or another justification, to execute them anyway. Now, I will admit them and regret them as well as document prior-unforeseen problems. 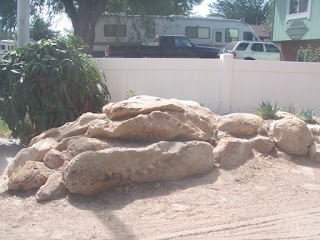 I still feel it looks good form this angle; the rocks agree and seem to be cohesive. 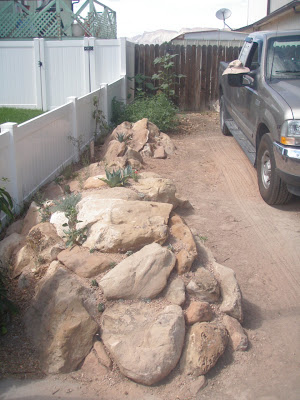 Fail #1 But gah!  from this angle, from the South, angles are not terribly in agreement, and that pale medium-sized rock in the middle has a terrible forty-five degree angle that is the most dissonant of them all.  Rocks in outcroppings in nature were once the same rock, so fissures make lines that repeat, and repeat, and repeat...
Fail #1.5: the above rocks also do not quite harmonise due to the fact that, despite my menteally labelling them all as "sandstone" and assuming they would thus be good bedfellows, they are different kinds of sandstone and are different colours, which immediately proves they did not erode from the same stone.  Epic fail! 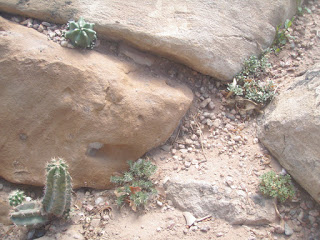 Now, the plants don't seem to mind, in fact, I am shocked how well they are thriving and already growing amid days upon days over 100 F (37C), with wind, even.  They are being watered lightly once or twice a week between natural baking cycles. The soil is unamended (no organics added) sandy-loam soil with bits of gravel mixed in here-and-there accidentally.  The surface inch, two, or three become completely dry, while moisture down deep seems to remain solidly.  Having no potting soil near the roots of these new plants seem to remove interference of the passage of this moisture up to the plants.  In driest times, they will wilt rather than outright flash-die like the average recently-planted flower.  This part has been one of the most persuasive observations that has convinced me of the miracles of the bare-root-planting technique. Amen! 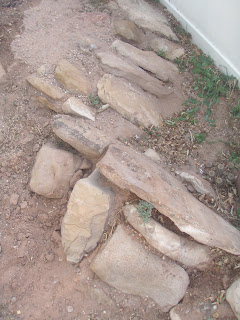 Fail #2. And this section- what was I thinking?  I was on a roll to use up all stone I had nearby.  But tho middle section of the garden, with its paver-style sharp-edged stones, looks completely wrong between great moundy wind-scoured looking features and stones that are the rest of the garden.  It might have been fine alone, or within a whole garden with this more sliced-style.

Fail #3 Along the incredibly classy vinyl fence in the picture, the viewer will also see turf.  This is not a good thing.  A running perennial sod-grass with long rhizomes: it invades under the fence from the neighbor's turf. I thought about this problem early on, but all reason was subsumed by my impatience and that foolish tendency to do the fun bits and pretend that the less-fun bits (like installing edging to prevent the delicate and petite garden from being overtaken by horrendous brute hordes) can be conveniently forgotten.
WRONG!
Worse yet, I conveniently forgot there was a colony of bindweed, too.  Nice.

Thank goodness these neighbours are kind folk- for I have permission to install that much-needed edging on their side of the fence. (Since where the edging ought to be is completely inaccessible under tons of rock!)  I shall also have to spray or dig-pull-dig-pull remaining rhizomes that are already at home among the sandstone boulders.

Fail #4.  Washout!  Simple physics.  Certain areas (bear with me now, for verbose conceptualities) that see water-drainage from large rock surfaces get enough water flowing over them to wash the soil away.  It is usually crevices- cracks between rocks- that I see as prime plant real-estate and water sees as fair game to wash away.  Severity of washout exaserbates with the increase in size of "watershed" areas and decrease in size of soil-patch (relative to a soul-patch, and equally awkward) that must endure this tiny flash flood.  Indeed, rain or irrigation will accumulate on these spaces, funneling more water to special plants growing here (while they still enjoy perfect crown drainage keeping their little necks quite dry and free from rot), but before said hypothetical plant's roots can hold the soil, it seems to wash away.

Solutions:
A. Don't forget smaller stones graduating down form the big ones.  Slivers that fit in to cover more of the ever-shrinking surface area in these crannies.

B. Gravel mixed into the soil- more on the surface and less down deeper- seems to work.  I don't quite know why.  But in a tiny crack, I can see why: a stone will wedge itself with the steady help of good old gravity, and it is quite like a strong person who pushes his arms out to brace himself in a door jamb and tuhs keeps his followers from passing.

C.  Water tediously slowly.  This is what I did.  Shove a plant, like an 8-year-old-boy into full-sized knight's armour, in a crack and charge it with growing roots and leaf that will physically hold the soil in and physically slow down the passing water rivulet.  Then, water-in said plant with a drip-drip-drip speed.  A slow slow soaking will allow the soil time to soak in the water before it can form sheets which will roll over it and carry things off.  This is mostly what I did, and much to my surprise, steep inclines of loose soil got themselves settled in (the particles must become more locked together, I reckon) and appear to be resisting surface washout.  Perhaps the loam component of the sandy-loam is gluing together a soil "crust," which I have noticed when digging about lately.

What does nature have going on in her washout-prone crevices?  Lots of things, and they all seem to work.  Sometimes nature has permanent washouts.  But observe this one- nature can, in fact, fill up crevices.  Even ones taller than surrounding area.  Usually it is wind that accumulated this debris, and things that can get wedged will get wedged, and gypsy debris finds another spot.  But one fitting pebble stops another pebble, which in turn stops a pinch of sand... Also: Plants, attracted to the moisture or protection of a crevice whose soil has obeyed gravity (has leveled or washed away), will grow there, die there, accumulating particles in life and death. Their wedged-in carcasses will build up the crevice's substrate, whiel dead roots will hold in what is there already to accommodate yet more life down the road.
This is already happening in  the garden.  The "carcass' part, too.

Been there, done that! Wedging plants in crevices is a never ending source of frustration for me as well...