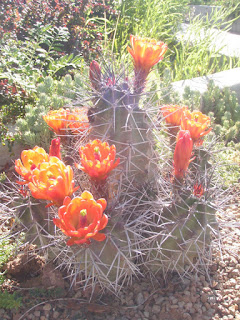 I find myself getting caked in the pasty makeup that is the jargon and lingo of plant nerdery, and often find myself being painfully not understandable while I rattle on to the innocent bystander.  This nasty disease is terminal and too late for me, I suppose, but here is a quick immunization injection to help the reader survive botanical abbriviation used lightly in this blog, but relied upon heavily in plant literature.

They aren't all that bad; go kiss a botanical term today.


germplasm   =refering to a plant as its genetic makeup, its personal entourage of DNA.  Often, we talk about a particular garden plant being of germplasm from a certain place.

ssp.   =subspecies.  A subspecies is simply a separation between living things that is smaller than species.  For instance, Wolves are all called "Canis lupus."  But the Arctic Wolf is "Canis lupus ssp. arctos," usually written"Canis lupus" arctos, or abbreviated "C. lupus arctos"

cult.    = cultivation.  Scientifically refering to an organism in domestication.

aff.     =affinity.  This is what we tag a name with when something looks like a thing we know, but we cannot prove it. Example: Campanula aff. betulifolia.  It is definately a Campanula, and it just looks strongly like the Birch-leaf species.

x    =hybrid, or cross of two or more species.  Some folks read this as "cross," others say "x." You'll love this exaple; it gets me rolling.  Two fan palms, Washingtonia filifera,  and Washingotnia robusta, can be hybridised.  Their bastard kiddo is called either "Washingtonia filifera x robusta" or, (are you ready for this?)  "Washingtonia x filibusta."  Gosh, it couldn't have worked out better if planned.

(Please mail/comment if there are others that deserve inclusion)
Posted by Kenton J. Seth at 10:48 PM

Your Echinocereus looks more like E. coccineus var. gurneyi to me than E. lloydii--but I have been wrong in the past...

Other Botanical jargon includes "squinny", "muggy", and all manner of botanical Latin adjectives that slip into some gardeners chat (revolute, hirsute, caespitose, indumentum--these are commonly used by Rhody lovers and some rock gardeners)..Primula lovers all know about thrum and pin eyed flowers (and some use the Latin for these). Then there are Irisarians' rhizomes, corms and terms like plicate or plicata, variegata etc...The Cactus people have glochids, and all manner of describing spination and pads that are truly jargony. No end of botanical jargon, really!