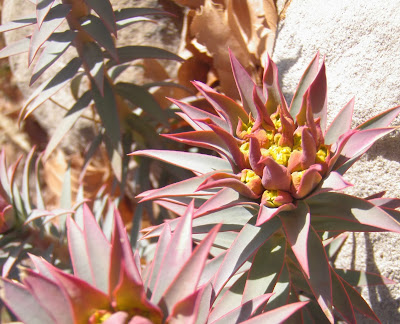 It's rigid, yep.  Like all its relatives, it bleeds a milky sap to which the majority of humans seem allergic.   Just use gloves.  (A brilliant little blog by Denver Botanic's Panayoti Kelaidis on Euphorbs here.)

So NOTHING eats it.  Rabbits, deer, mice, deermice, giraffes...  Nope.

It looks similar, but it is not at all, in fact, the noxious nasty "Myrtle  Spurge" or "Donkey Tail." Every time I see that someone has transplanted the Myrtle-Spurge as an "heirloom"-style way-easy garden plant, I want to tear it out and secretly replace it...

This lovely cousin is the anchor of my first and puny crevice garden.  It's basically the same size as the garden.  Which is good, becasue it looks awesome absolutely 13 months of the year. 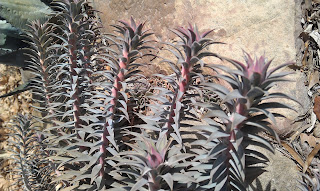 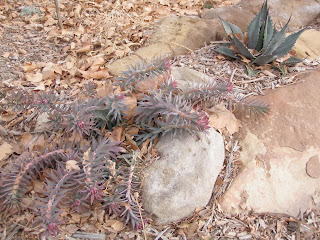 In fact, Euphoribia was quite decorative in the -15F (-25C) realm last winter just days before the cold would turn that Havard's Agave into jelly.  This spurge is tough. 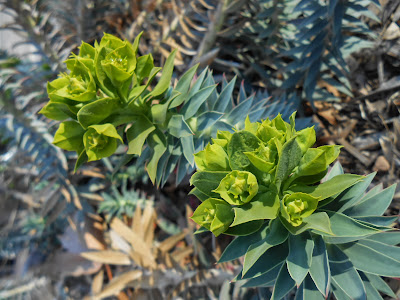 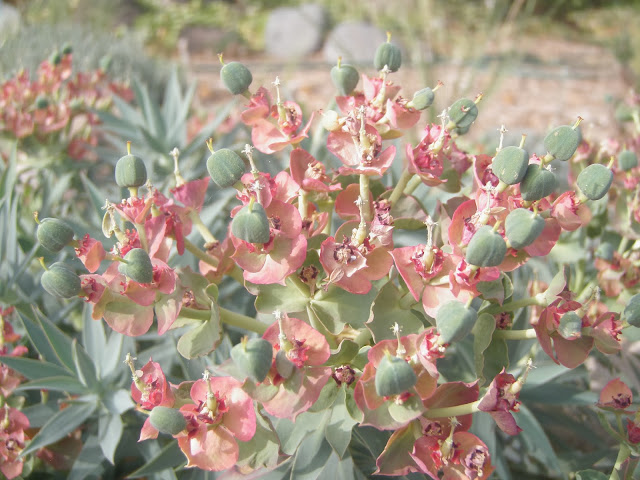 The ruddy flowers give way quickly to seedpods.
This year, I discovered why its progeny were on such distant corners of the garden: While planting nearby, I kept feeling pricks against my cheek. Finally, I realised that the air-filled fruit become pressurised by the sun and explode their seed to distant places! 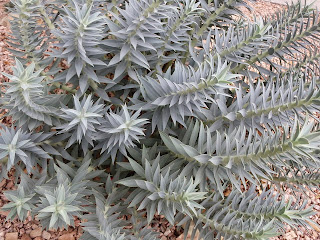 Just when the tired bloomed-out stems of this year finish, A new set of spiny octopus arms has already emerged to replace them looking oceanically regal.  A mass planting of this would look great near a schwanky new building, like so much brushed steel. 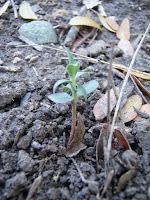 BUT- and this is a big but- It is reseeding about the garden, and looking quite nice in form in the dryest and even shadiest of places. Which at once pleases me and scares me.  I am watching you, oh Mediterranean Spurge.  If you are not the next horrendous weed, you are the prettiest dang thing.
Posted by Kenton J. Seth at 9:34 PM

I think Euphorbia myrsinites is perfectly fine in urban settings--it should only be eschewed near nature (the real pest is Euphorbia esula--500 times weedier and more toxic and infesting millions of acres--but less conspicuous so no one cares. Because a plant is ornamental it gets crucified--such as myrsitnites which I have seen gracing the Alpine House at Kew after all! Yes, rigida self sows--in GJ. In Denver this is a rare occurrence: "invasiveness" and "weediness" is entirely contextual. All plants are sacred--it's their context that makes them good or not. End of diatribe! Great to see you last week...(and love your pix of rigida)...

I much prefer E. rigida, too! The other is nice for a week in spring, but it is weedy and not so pretty. No point in growing it when you are mild enough! What's amazing is you are warm enough somehow with the temperatures you had.

Thanks PK. I would love to use it in landscapes, as it is so ornamental, but I am watching it first... I think I'll plant some in an unirrgated garden to test- where I can control it...

DryHeatBlog; Indeed, it was quite unscathed- with perfect leaf condition, even after the weather inversion. That's a solid zone 6, pushing toward 5. It has a very widespread distribution- and I bet it creeps pretty far inland and up those mountains in Turkey. I'd like to go there and select some nice forms- I have seen a larger forms than mine in a garden in Boulder, CO.