The Future of Rock Gardening with Ian Christie 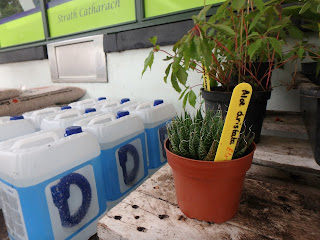 It's a good sign of the country you are in when you spot an Aloe aristata, difficult to find and the hardiest aloe, at a gas station. 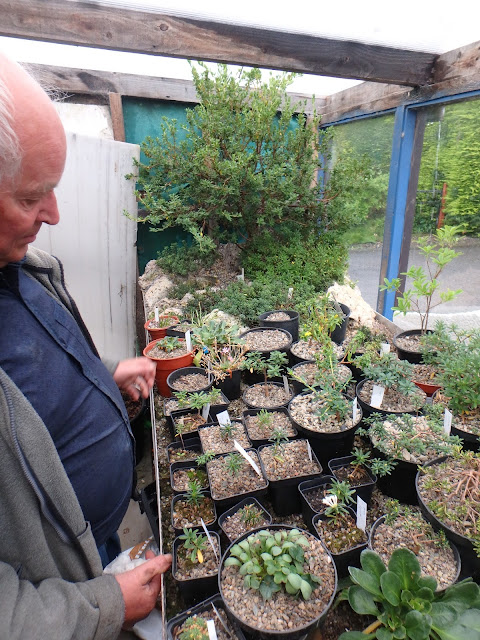 We went to Angus, a council area of Scotland just north of Edinburgh, to visit Mr. Ian Christie of Christie Alpines.  He is a prolific grower of many rock garden plants, who is responsible for choice specimens in gardens all over the UK. Here, he showed me his Daphne propagating operation.

Christie kept saying, reminded by my American-ness, that when he visited the states years ago, he was deeply impressed by Tower Hill Botanic Garden in Massachusetts. 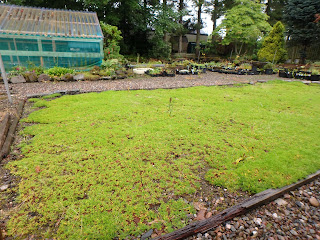 I was distracted by the chamomile lawn his lovely wife maintains. 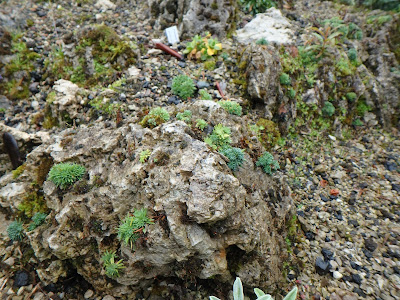 While many rock gardeners battle moss growing on their tufa and porous stones in moist climates like Scotland and parts of the UK, Ian says the moss holds just enough moisture to help seeds, like of these Saxifrages he sowed here, to get started directly on the stone surface.

He feels, even in a climate as patently wet as his, that tufa should be buried not less than 1/3 in the ground/bed. 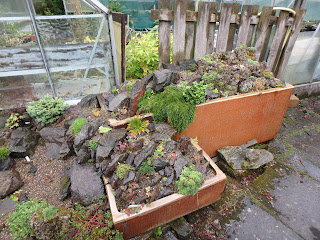 A crevice garden spills out of a trough into another, then onto the ground, like a great basaltic wave. 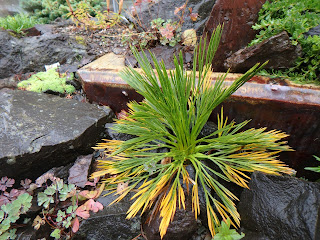 I started to fall in lust with Aciphylla (An evergreen carrot relative from New Zealand) in his garden. They behave so much like Agaves and Yuccas. Maybe that's why.
Anyone know the species of this one? 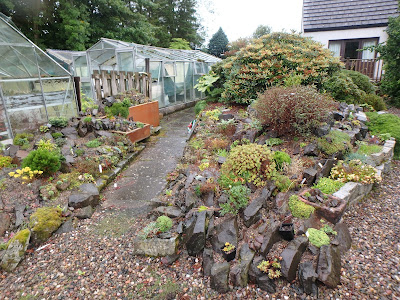 Christie's favorite way to plant into tight crevices is to insert rooted cuttings, rather than grown-up plants in pots.

He raises the cuttings in strawberry boxes from the grocery store- these are cheap/free containers with a clear, hinged lid with a little ventilation built right in, allowing hime to take the whole thing to a lecture or workshop with a bunch of baggies to give cuttings away to attendees.

Note how well he uses the chunky basalt, a volcanic stone which does not naturally bed in regular, sedimentary layers like sandstone and other traditionally used in crevice gardens.  I really love the more irregular shapes of volcanic stones, like his basalt, and granites, gneisses,- their stratification comes from the way they crack based on crystalline structure of their components. 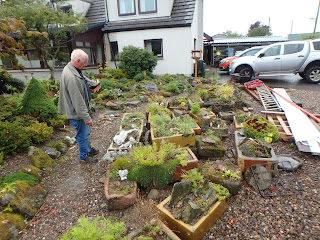 Troughs are essential in the UK for growing things that want drainage.  No one we visited could have too many troughs. They also lift tiny plants closer to view. 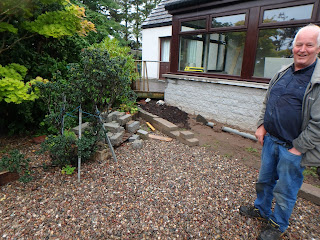 Ian is an absolutely lovely fellow.   He has a boyish excitement for new projects, like a raised bed or crevice garden in front of their new glassed-in sunroom.

He also has a very practical outlook which he offered up on the future of rock gardening, which is pretty relevant since I was sent with the Diana Aitchison grant, aimed at helping young people learn about rock gardening:

What does he do when he has seed of a special, new plant? Spread it around- an insurance policy that someone will succeed with it. What if he grows or gets more seed?
"Give it to someone younger than yourself."

I told him that I normally, ironically, give most of a precious seed to folks older than myself because they are more apt to be better at growing them!

And for the first time, without my asking, he said perhaps the most insightful, hopeful, and real thing about getting young people into rock gardening specifically:
"You've got to start them on general gardening. Just to get their hands in the earth"  because how will they have an appreciation for the subtleties of botanical horticulture, and sophisticated microclimate creation, if they don't have the magical pairing of both a basic understanding and a basic love for gardening?

It's true. Rock gardening is a subset of gardening, and there is nothing lost inspiring an appreciation for cultivation in our youth.