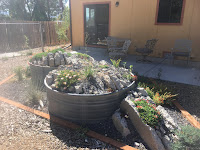 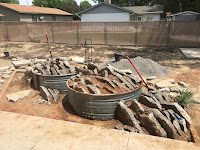 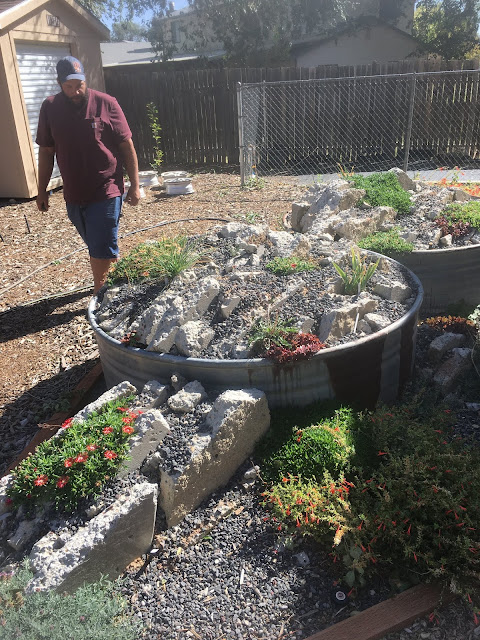 This crevice garden was a side order.

I was creating a small, exotic-fruit-tree orchard in Bret's backyard. Pawpaw, Jujube, Kiwi, Figs, trifoliate orange, Che, and the like. Bret is the prez of the local cactus club (his unwatered front yard has the cactus).  The back yard project entailed taking out an old concrete patio to re-pour a larger one. The plan was to have small rock gardens in his re-purposed two 6' (2m) wide (400 gallon) stock tanks, or horse troughs. But instead of buying 3/4 of a dumptruck of rock, it occurred to me mid-way we could use the concrete from the old patio, saving new material costs and disposal costs. It's about 7 tons (6300kilos) of concrete.

I did break the slabs into deliberately different-sized chunks as I went. I used two different soil mixes to give him options and see what grew mesembs better- he wanted Aloinopsis and Delospermas. One of said mixes is mostly decomposed granite fines. A third trough nearby is full of sand and compost as a vegetable bed.  I cut 4' (1.3m) wide holes in the bottoms of the troughs to  minimize the perched water table and allow complete drainage into the soil below, while keeping some of the base for structural integrity to support the sides. They are essentially raised beds, which are awesome for folks with limited mobility.  Did you know that even galvanized metal still rusts? I didn't. It's just slower. I grew to like the bands of rust, (which are merely on the surface and one side) so I used them and turned them to be featured. the insides I lined with a marine sealant. In retrospect, it's a funny accidental echo of the historical British Alpine trough which came about from using abandoned stone-hewn livestock troughs when they were replaced by metal ones. 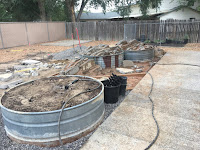 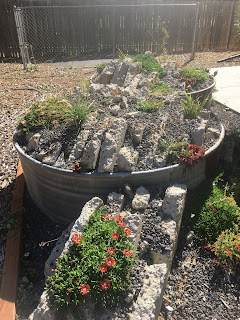 I used 1/2" (2cm) crushed basalt for the topdressing: a third gray color that intentionally doesn't try to pretend it broke off of the slabs, because I'm not trying to fake a mountain here. It sets off the linear pattern in the design; something I'd want to cover up in a natural garden. The form- the diving in and out of the containers- was inspired by Jiří Papoušek in Prague, who is perhaps the most active crevice garden innovator in the Czech Republic now. 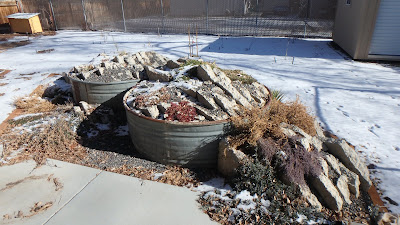 The prettiest things in my designs are always accidents.  Winter colors here: Delosperma nubigenum is red, D. cooperi and friends are a nice green, and the thyme is purple.  I even like the tan/straw-bleached Zauchneria skeleton.  Our first frost was a rude 16 F (-9C) this year, but luckily most plants seemed to have been hardened enough. Except figs- both mine and Bret's look bad; let's hope they return from the ground next year.

Folks often ask about the alkaline nature of concrete.  I've been measuring pH of water with new concrete soaking in it- and it starts strong- like ph11 when it is young; then it mellows down.  It seems that cured concrete is inert- or inert enough that nothing cares. In fact, it is probably a little helpful; more so in wet climates. Its mild long-term basic-ness is on its surface, so as a friend said "broken concrete is basically cheap limestone!"

While I'm still too much of a nature nut to use concrete for my own personal crevice garden, it's so legitimate.  Rock can be expensive. Crazy expensive, depending on where you live. And we're not all rich; I'm still trying to find a source I can afford for my own home rockery. I think broken concrete not only is a brilliant blue-collar, ecologically-minded garden material, but something that allows gardeners in places where stone isn't even available to have a crevice garden.

How wonderful to have a little more of the backstory on this garden that you know I'm a huge fan of.