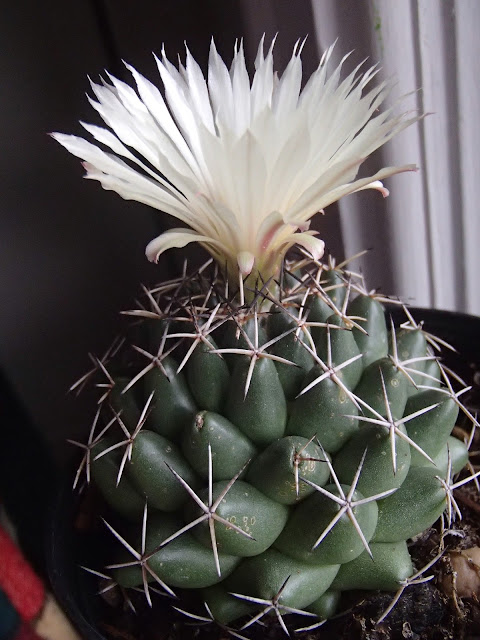 Coryphantha maiz-tablasensis.
Sometimes it's nice to skip the years of growth from seed and go strait to buying a free-flowering plant from Yucca-do.  Probably not hardy outdoors, even here. 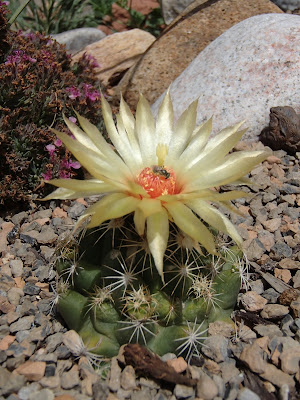 Here's a hardy Coryphantha for you- C. similis.  Maybe better known as Escobaria missouriensis var. navajoensis.  This plant is blooming and attracting green native bees in Kevin's  Boulder, Colorado neighbourhood-median-garden.  If you are like me, and miss the obvious, the petals are metallic and reflective. Note, too, it's blooming in summer, which is nice when the bulk of cacti bloom in mid-late spring. 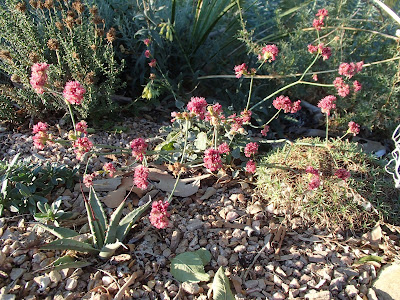 Eriogonum grande var. rubescens. San Miguel Island Buckwheat. It has been blooming for months and I hope it makes my fellow buckwheat lovers jealous.  It's in part-shade, dry clay, watered lightly once a week or less. It was planted April 2014. 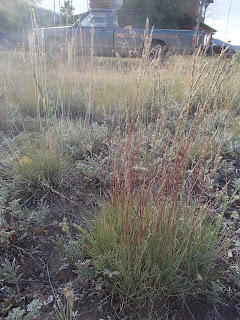 Ring Muhly, Muhlenbergia torreyi,  near Bristol Head, Creede, CO.  This miniature and incredibly long-lived grass must be grown more often.  I have seen a plant the same size as this, in a garden, confirmed to be decades old.  To propagators out there:  I will send you material, and Mike Bone of DBG says its easy from cuttings. He's right. 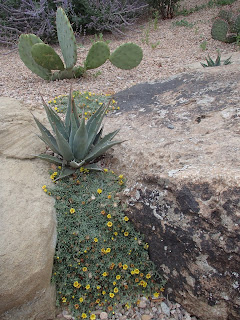 Opuntia englemanii var. linheimeri, Agave parryi, and Heterotheca jonesii.  The mat aster is there to prevent weeds from growing in the Agave which would be dangerous to pull. 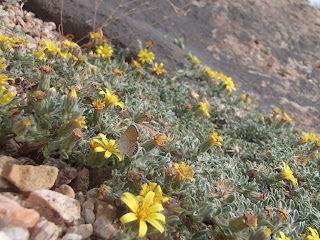 Jone's Mat Aster or Jone's Goldenaster, Heterotheca jonesii.
She is thriving without irrigation and attracting these fun miniature butterflies. 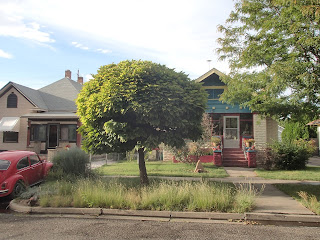 Bouteloua gracilis, or Blue Grama, brilliantly used in a downtown Grand Junction parkway.  (It's in bloom) I would love to find out how often it is watered and mown.  I am curious what others feel about the aesthetics of an ornaental native grass like this:  Does it look shaggy or like it was a lawn that has not been mown?  What do you think of this landscape?

That park strip looks like mine. I have mine in front of the scree bed so it integrates a little better. But there is a lawn area as well next to the scree. Looks incongruous, imho.

This insight from the owner of the blue grama from the post on Sept 8 about the grama on Sept 6, Steve:

"There are few things I like less than over-watered and over-mowed parking strips. But at first glance, I find this one somewhat out of place. I think it has to do with the mowed lawn behind it. Or maybe the size of the strips in this part of town.

But as I looked at the picture more, I realize that this is the street view. As I try to imagine the view from the front porch, I think I would find this arrangement much more likable. The front yard giving way to a wide swath of Bouteloua in front of the street."

One more thought on this, my city has archaic ordinances that require some 40% of the garden facing the street be covered in turf grass. They also have an ordinance against tall grass on a property. I have tried to appease and flout both rules by yes, installing turf on 40% of the front, or an approximation to it, but also by putting in B. gracilis in the parkstrip along with other stuff for a meadowy look. If onlookers see a patch of grass that is mowed and trimmed next to a strip of appropriately western wild, they are more likely to see it as a deliberate choice rather than negligence.