I never planned to share this.
But I did a home test of some soil additives and it might be useful to you.

Especially rock gardeners, orchid growers, bonsai enthusiasts and green roof builders have been more and more embracing permeable aggregates. They are a wide array, like Expanded Shale (Utelite in Utah), Expanded slate (Permatill in North Carolina),  the porous but fired ceramic (Seramis in Germany, UK, EU), Turface (the red of baseball diamonds), as well as older, well known natural materials like gravel made from shale stone, limestone, and gravel from scoria (lava rock) and pumice. You can also count diatomaceous earth in its non-pulverized form. 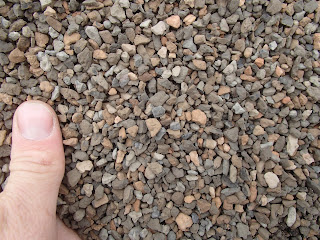 Very, very, very fancy kitty litter:
This expanded shale made in Denver is used as the main component of soil for greenroofs.
Expanded shale has been mixed into sand-based rock garden mixes at Denver Botanic, and makes up a third of my current favorite xeric/rock garden seed pot mix. It has been sold in bulk by nurseries and comes in different screened sizes.

All of these "gravels," natural or manmade, hold water and nutrients, to varying degrees. What I want to share was a fun home science project from a few years ago in which I wanted to know how much and for how long water was held by a variety of these available materials.  So I filled pots with them, having been dried to air temperature in the house for months.  They were each soaked with water, allowed to drain a set time, and then weighed daily for their water weight for 25 days.  My "science" was not airtight on this, but I tried to mimic good practices on my kitchen table. I know- I forgot a control pot that was not wetted, which would have ensured that my thift-store kitchen scale wasn't inaccurate.

Let's cut to the chase.

Turface held the most water, by weight, and for the longest time. It's comparable to expanded shale. 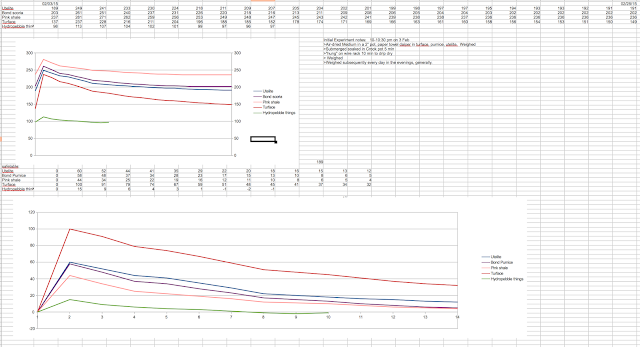 The first graph is simply the weight of each material every day after being soaked.
The second abridged graph is the weight of the water alone, and as you can see, some of the materials still had water trapped inside the aggregates at the end of my "study", 25 days later.

My deeply scientific label "hydropebble things" are ceramic pebbles used in hydroponics and orchid growing, the size of marbles. They would be useless for alpine and xeric plants but do a great job for orchids and hydroponics watered frequently. My "pink shale" is a 1/2" screened gravel crushed from pink shale rocks that I think are quarried in Wyoming and sold in landscape yards here in Western Colorado. The "Bond Pumice" is actually scoria (pumice and scoria are geologically different, I would learn) mined in Colorado, but common around earth as a normally black or red "lava rock" used in cactus mixes, et cetera. Utelite is the brand of expanded shale manufactured in Salt Lake City and used in their green-roofs there and probably in architectural concrete. The Turface came from a bag that was meant to go to a playing field. It's more expensive per weight but is mercifully available in a bag most anywhere people play baseball. 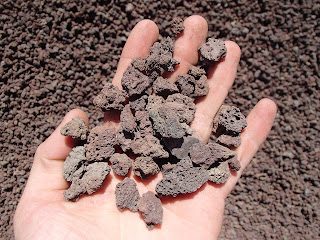 These red scoria chunks are screened a bit too large for use in small containers;
1/2 inch (1.5cm) size is better.

This isn't a new idea, but it's more popular, that's for sure. The old school version was crushed flower pots, which were terra cotta: able to absorb water but were in little gravelly chunks to the consistency of kitty litter, allowing air and water to pass and drain around them.

Know that the test used these materials alone in pots, with air spaces between their particles. If these materials were used in a mix, especially one with peat or other fine materials, those fines would fill the gaps and certainly transport water around a container and change the way it is released and evaporates, which adds a big layer of complexity to how such permeable materials work when they are merely one component of a mix.

Also know that this doesn't say anything about the nutrient holding abilities of these materials, which probably varies dramatically between them, and would be lab tested as CEC, or Cation Exchange Capacity. What is so attractive about these materials is that they can hold nutrients without being organic matter, which is useful when we are growing plants from rocky places and aridisols, et cetera. Such plants are often sensitive to fungus and bacteria which thrive in a rich organic nutrient environment. Permeable aggregates also don't break down and can be sterilized for re-use.

I am too lazy to write any further depth, as I just wrote a chapter on it for our book, but this graph has been sitting around my computer for a while begging to be shared with folks who have been playing with these materials and would stand to learn from it.  I hope it is useful to you, friends.

Happy Spring and "Media Mania," (the season when you obsess over potting mixes) 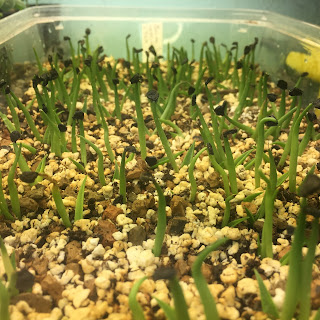 Adding on to this post- A friend in Seattle said he's read that Turface has a low CEC; an important rumor to note and test out- I'd love to see a proper lab tested comparison.