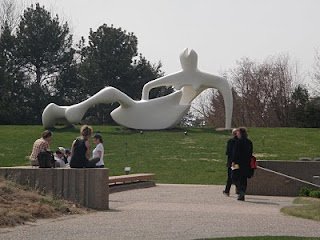 It's nice to come home and re-examine it after being away. I went to Denver Botanic to-day. The garden was dancing a slow salsa to the music of spring, and was full of whom I assume were art school students, sketching and studying the new Henry Moore sculpture exhibit throughout the gardens. Some of the world's finest figurative scultpure. And fine plants. There were already Helianthemums in bloom in the warmest part of the rockery. 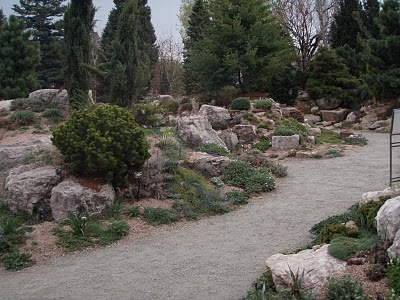 DBG's award-winning rockery is thirty years old exactly and about an acre to hold about two thousand plants, within a particularly topographical arrangement of rocks. I love this kind of garden. This one is ideal. The garden's curator, Mike Kintgen, says: "We're keeping a scientific collection alive." Music to my ears. 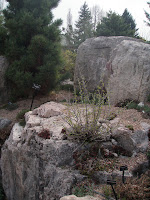 The garden was built up with Owl Creek limestone, and this great just-leafing-out specimen was an original native plant growing in the rock when harvested. (Cercocarpus montanus, Mountain Mahogany) 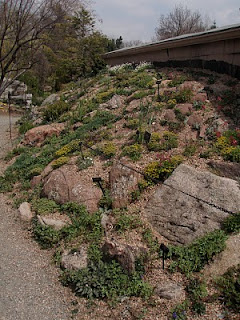 The garden receives minimum water- which varies dramatically depending on plant material, base soil, and the mood of the irrigation system at the time. Mike calls watering in general a "tricky thing." Three of its gardens are not irrigated (except for establishment waterings, of course). He notes how, unsurprisingly, the clay-soil gardens retain water by far better. Folks, stop complaining about your clay already and realise how good it is for you. Just don't eat it.

The above garden is sort of a jewel-box of non-xeric plants, so it obviously gets more water than the rest. Mike has found that of the Corydalis, C. ochroleuca is the most drought-tolerant. I failed to get a shot of it. 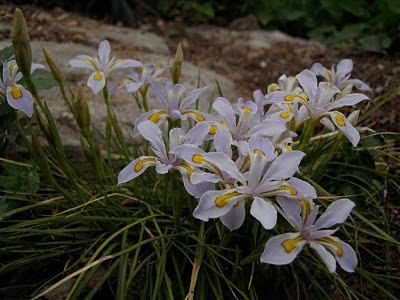 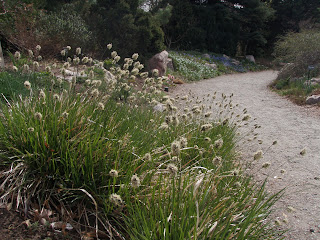 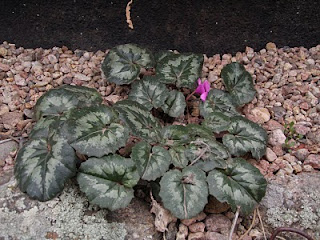 Cyclamen time. This is C. pseudibericum 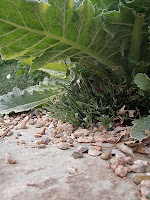 (A Kintgen collection- Erinaceae anthyllis from Morocco, which will have sone nice lavendar-purple flowers, even, perhaps, as it cowers under this desirable Verbascum.) 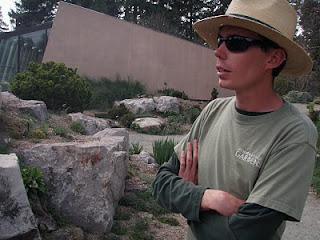 Mike is pretty amazing- a fine plantsman who has collected plants in Morocco. He does a solid job at maintaining the garden that will be on everyone's agenda at the North American Rock Garden Society's annual meeting this summer in Denver. And he's 28. It's nice to meet younger folk in our trade, we both agreed.

Which brings up the topic that has sprung up lately: what of the fact that at club and society meetings for any particular plant geekdom (Orchids, African violets, Rock Gardens, Cactus...) one sees 90% grey hair? (Let's be honest now, and don't forget that grey is "distinguished," eh?) Some folks have fears that lovers of plants are on the decline and will be dying out. Yikes, eh?

Mike says he likes to think positively: "I can't think about the end of horticulture."

The going theory I hear and agree with is that members of the-first-half-of-life are too distracted with unimportant things like child rearing and life to have time to get gardening and find themselves entwined in a ridiculous affair with green things, symptoms including a small but packed greenhouse in the back yard and a front yard without turf. My succulent-collecting friend, who is good at growing both kids and plants says "Growing succulents is so much fun, I don't know why more people don't do it." Yeah. I wonder the same thing all the time.

But truly, I wonder what the demography was of the plant-oriented societies back in the day. Any kind of society, Say 1950. Say 1850. I always picture land-holding British rich-guys or retired professors populating those old clubs, but that is my imagination. Were there any youth? If there were not, an if my pipe-smoking image is correct, then young blood is on the rise.