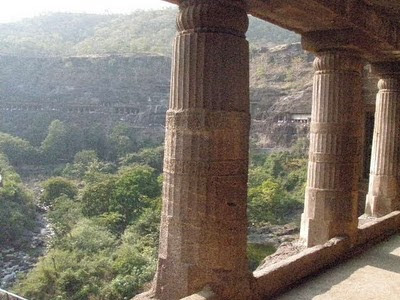 The first thing to know about India is that it is big. The subcontinent superimposes pretty well over a map of the US, and there are 1.2 billion people that call it home. That is a lot of people. The Chatrapati Shivaji (or "Victoria" train-) Terminus in Downtown Bombay (Mumbai...) sees around two million commuters and travelers each day. That is about the same as the population of Denver, the mile-high capital of Colorado, USA. Getting on that train, one will pass through smaller towns of 50 thousand to a million every hour or so, it seems, from one coast of India to the other.

(above photo: Ajanta Caves, near Aurangabad. Look them up on Wiki if you want to know more. Below, shoes shed at the entrance to a holy room within them.) 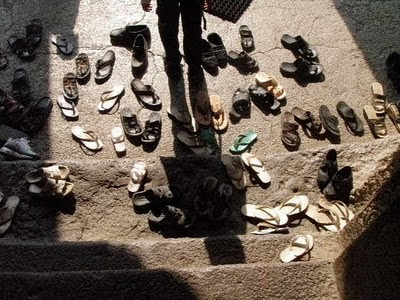 How did I get there? Having nothing good to do with myself last winter, I confessed this fact to my dear friend. His immediate and surprising reply was. "You should go to India." It made perfect sense to to go to a place that was several things: A place I'd never has any interest in, on the other side of the planet (a good way to start one's globetrotting: furthest first.), and easy to navigate with English being one of it's official languages.
Thanks Stoney. 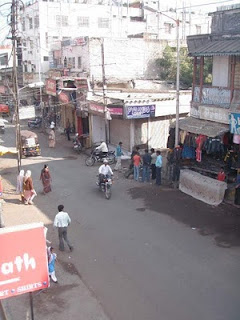 The trip concept was facilitated by an institution within my alma mater: The Mesa State College Outdoor Program. (affectionately known as "the OP.") Their fearless leader, Chad Thatcher, is the heart-fire, organising backpacker-style student trips twice yearly to terribly exotic places. No student returns unchanged in a positive way. Thank you Chad. Our particular group was comprised of supreme folks. Two of us, the amazing Chani Capps and myself, did some of our own art-initiated wandering. 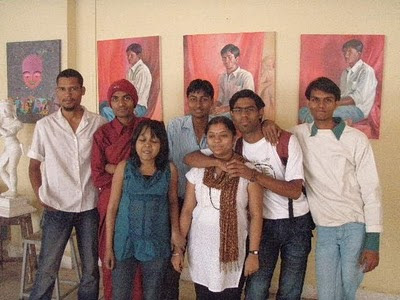 Above: Chani and I had the pleasure, thanks to our new friend Akshay, (arms around his schoolmate) of touring the Aurangabad Government School of Fine Art. It was eerily like the art school I went to.
I travelled with my friends half-way, then, as will happen to me, my botanical lusts lured me away to go see the hills and their local greenthings, for which there is a separate blog entry. 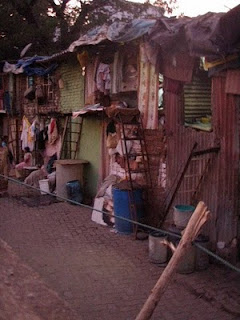 Poverty. Yes. It's there. It's bad. So is the wealth. India experiences an extreme of both. The folks I met, despite suffering or simple complete poverty, were smiling all the time and otherwise happy with a meagre existence. I won't wax poetic about it, but it is true; startlingly so. 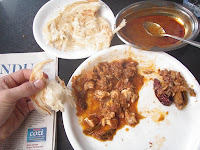 Under all conditions and in any even, Indians offer good food. Oh, roti and Chawpathi. Food is eaten with the hands one-hundred percent. It is part of a fully developed cultural sense of clean and unclean. One eats with the right hand, and cleans oneself post-toilet with the left. Shoes are left out of homes and temples, and on the ground in the event the wearer lies down on a bench, couch, etc. So Indian shoes are always designed for easy removal. (Unlike Colorado-made sandals designed to stay on during whitewater rafting...) 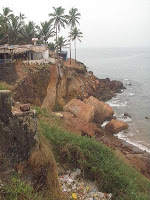 The State of Goa is several things. Small, Portuguese influenced (there is a significant Christian population) and a tourist heap in the winter season. Acid-dropping hypnotic-trance-music beach-parties are completely normal every night with tourists from all parts of the world. Especially German Hippies. 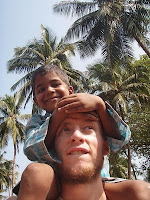 The College group volunteered for a couple days in interior Goa painting and building bathrooms for a non-profit slum-kid-benefiting school. Educatorstrust.org. Working with the kids was a privilege for all of us. Something that everyone traveling anywhere ought to think of: Other than adding a spit of fuel to the local tourist economy, how can you give back to the places that gave you hospitality, love, and experiences? 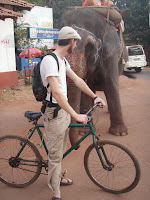 A traffic event singular to India. Oh I hated that bike. Tried to kill me... 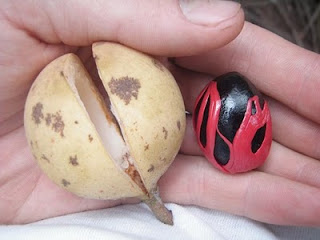 Where-food-comes-from came to centre stage for me when I stumbled into the forest-esque Parsekar Organic Farm, supplying Mangoes, coconut oil, black pepper, turmeric, betel nut, nutmeg (above black nut- the Carmine bit will be mace.), clove, and vegetables in season. 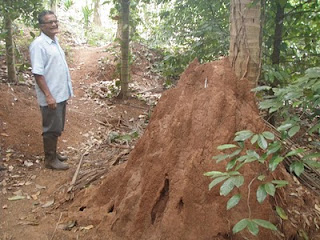 Mr. Parsekar gets help from the locally misunderstood termites, who eat only dead matter, converting it into fertiliser.

Kerala is one of the most beautiful states in the South. This is a fishing net in the shallow backwaters, lowered at night with a light bulb to attract fish-attracting insects until it is lifted. The rest of my experiences in Kerala I will keep to myself. 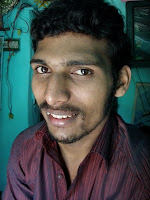 On a bus heading into the misty Nilgiri Hills in the Western Ghats (Mountain Range), I met Arul Komar here, who was visiting his family for a holiday. His family, part of the completely tea-growing-processing-and-distributing-oriented-economy took me in in and took care of a tired traveller. 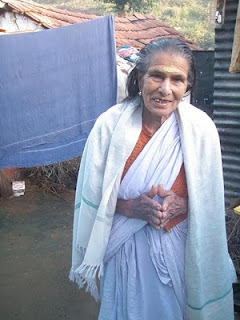 Having so little by American or Western standards, they were the happiest people under the Tamil sun. Their home was perhaps thirty by ten feet, housing six people and a lot of generous love. 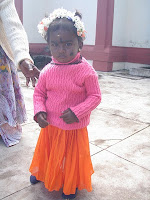 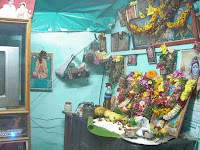 In the home's small interior, there were two utilities that didn't go with the generally needed bed, food, etc, lot. An entertainment centre with DVD even, and a shrine. Indians are, in a generally-safe-to-say-way, a particularly perfectly religious people. All acts of daily life make a nod to the higher power. 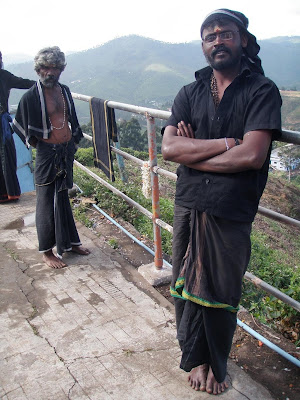 These Gents are dressed in the garb for a yearly pilgrimage to Sabrimala (In southern Kerala) for the God Ayappas. There is fasting twenty days ahead and after the pilgrimage, and an offering taken there on behalf of each pilgrim's family. There were trains and trains full of (mostly) men on their way. The man in front proved, behind his glasses, to be a very educated man from this small village of Salas. 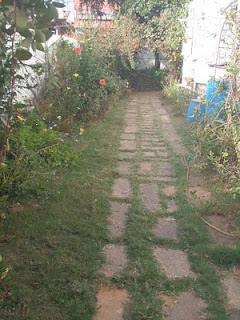 Before arriving in Mysore, I remembered that I had corresponded with a charming man in Mysore an international gardener's network, Davesgarden.com, regarding an orchid identity some years back. I am so glad to have looked him up and met this extraordinary man in person.
He's a great gardener, and here, I do his garden the injustice of a shot in the dormant (dry winter savanna) season. 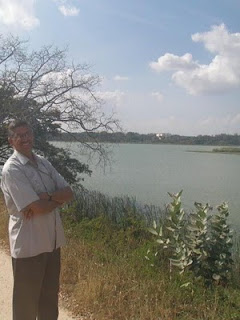 Dinakar, or Dinu, by his friends, helped me connect all the dots of observations I'd made, in the smallest capacity giving me history and explanations, and at greatest, making sense of Hindu culture for me, providing me with insight that has effected the rest of my life. 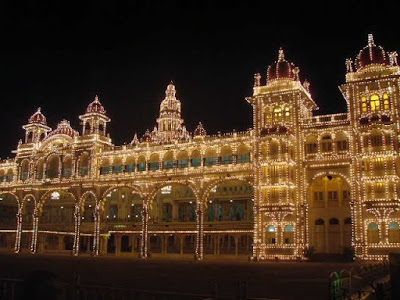 Mysore Palace is only lit for thirty minutes each week in order to keep it special. Another time to consult Wikipedia if you want the convoluted history of this novel construction. 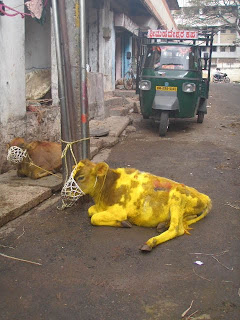 The Holiday of Sankranti, falling near a solar eclipse, left all the cows on the streets of Mysore feeling yellow. (Dyed with turmeric. Festive at its finest. He's also wearing a muzzle which will allow his mum extra milk sales for the holiday... Also note the rickshaw, these small-engine three-wheelers are the norm for transport.)
India was a rich chaos of spirit and colour. It's also very cheap for western currency holders to get a big bang for their Euro. So go. 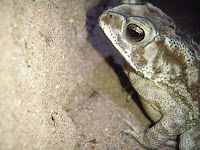