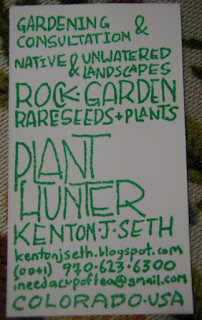 I have finally launched, in earnest, my own business, aiming to promote unwatered gardens as landscapes by being a landscaper who actually offers it.  This includes a business card and a business page discretely linked to the top of this blog.  I am pleased already this week to be responding to client interest.  It really was about dang time I applied myself to solve an industry shortcoming I've complained about for too long.

This is really to support my addiction to hunting plants. Don't tell anyone.

And, a passionflower, like a sweet metaphor, bloomed with three flowers today to the Western Colorado sun.  Like my business, it had been sitting around for many years, not sure if it wanted to blossom in its situation. There were times I thought it was certainly a bust- that it would never bloom, and other days I knew that it must- it just must.  It was inevitable.

And finally, here is proof of finished fickle rockwork of the Desert Crevice Garden.  It hasn't moved slowly, truly, but I am impatient; it is truly "done" now.  I look forward to the RMC-NARGS member's autumn plant sale in Denver next weekend to find some treasures for it.  This event is perhaps where some of the most choice and special plants swap hands in Colorado.  Certainly my favourite and most satisfying plant acquisitions have come from there.

Lastly, a herald of autumn quietly squeeks from the shade garden's leaf-litter.  Now-leafless C. herifolium is decidedly the easiest Cyclamen to grow in the West, being remarkably dry-growing.  Happy Fall.

I found this endearing picture in my files and wanted to post it today in celebration and congratulations to my friend Zhiro for having competed (& won) to earn a business trip to Germany and the CR (Czech Republic).
There is a prior post about him and his work here:
Enchanted by Armenia 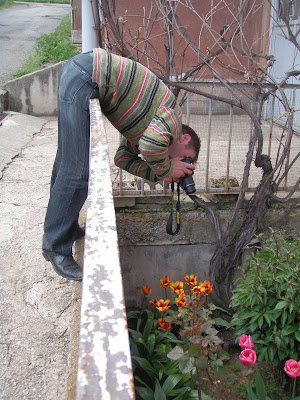 This is Freaking Important 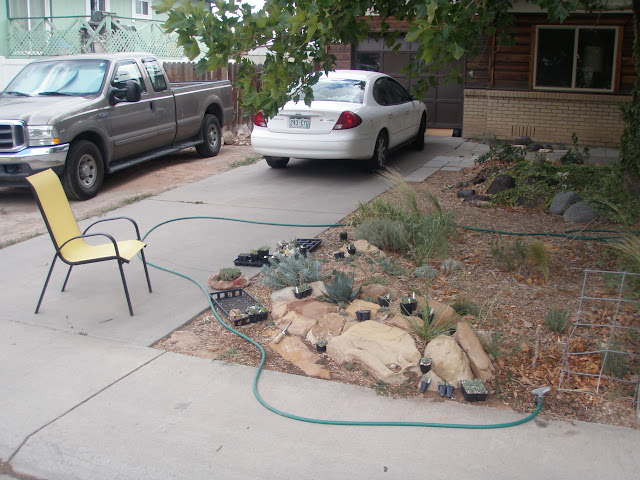 The question has arisen, to be discussed:

What is the point of all of this:
"Rock Gardens,"
plant collecting,
and whatnot?

What good does it really do?

(assuming that all things to which time and effort are devoted must "do" some "good." )

Well...
Wear a bib because this is going to get messy.

Conservation.
The "Day of Seven Billion" was announced on Halloween (honestly- I'm scared) of last year (2011) by the United Nations. (1)  As living things on this consistently-sized sphere, we cannot help but take up more resources in order to live as we do. (the last three words being extra hot potatoes in political realms) -Resources such as land, which we must use in different ways to provide for our many needs (which are inextricably tied up with "desires;" some butter for those philosophical hot potatoes,)  from roads for transport, farmland for food, grazing land for food, houses for living spaces, to reservoirs for water storage.  Essential things.  Also- slopes for skiiing. Land.  That is what has been taken up in Europe and set to extinciton five of seven species of neo-tulips, or Leiostomones botanical group.  One of which, at least, lost its last brushtroke on earth to being a ski-slope.  Once plentiful, now mostly extinct.

The value of a species?
Emotional value: The world could still spin without tigers, but who would dare say aloud that we ought not protect them?  And, the world may still spin without them, but what would it be like? Not as good, I say.  Not as good. Take out your intellectual steak-knife, and slowly chew on this, from the world's authority on ants:  "For every problem in a given discipline of science, there exists a species, or entity, or phenomenon ideal for its solution.  And, conversely, for every species of other entity, or phenomenon, there exists important problems for the solution of which those particular objects of research are ideally suited. "(3)

Some interpret his thought like this: save plants because we may cure cancer, say, with a compound from a plant, like this Orchid, Coelogyne odoratissima.  (I saw it hanging out on a cliff near Doddabetta, the highest point in Tamil Nadu, India:) 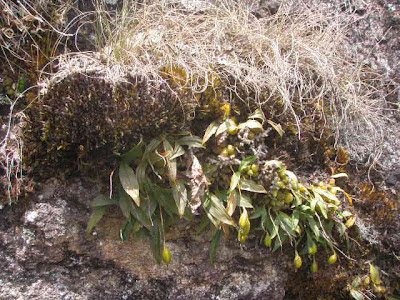 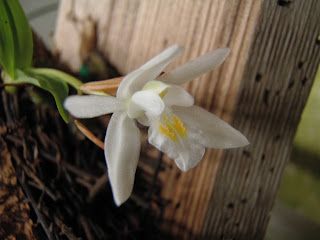 A Coelogyne odoratissima plant in bloom, in cultivation.

But that is only bringing a species of plant from its native place and increasing its odds of survival by speading it around.    Conservation goes beyond exotic alpines from Tien-shan being grown in Denver: it can be  natives of any place taken from the hillsides and brought into local gardens. It, too, does a world of good.  Native insects, for example, find less of their necessary partners in survival when land becomes domestic.  Unless that domestic land offers them those plants... 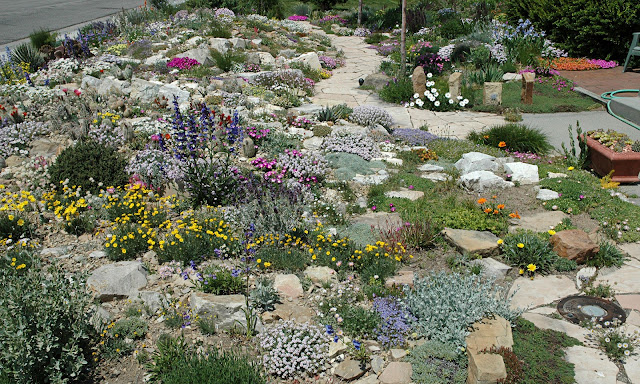 The incredibly Biodiverse garden (in May) of John Stireman of Sandy, Utah, phot credit to him. Last I saw it in July, it was abuzz with all sorts of tiny ground-nesting wasps who play critical roles in the ecosystem.  I was so distracted by how many different wasps milling about that I at times missed the plants.  I am certain they are not as at-home in a  completely-turfed-in yard.

Education.
This point will be anecdotal.  I imagine that I will only contribute to the reader's own list of moments in which our colleagues in civilisation betray a total lack of understanding of nature, not to mention natural systems.
-I've heard more than once about kids who literally do not know where cheese comes from.
-The average youth will be able to help me with the difference between an "Android" phone and an "iphone," but would completely fail to know the difference between a tomato, potato, or even a carrot plant.  I have been hollowly shocked to observe this in my vegetable garden with visitors- adults and kids alike.
-I heard a story about a larch being cut down because it was mistaken for a "pine" which died.  (a larch is a deciduous conifer which is meant to loose its needles)
-My dear roommate says "bee" when he describes the animals that stung him when he accidentally disturbed a metal-tubed post with a nest in it.  These are paper wasps/aerial hornets:  truly aggressive beasties, whereas bees are peacable flower-patrons we all rely upon for our food production.
-A friend hosting a garden tour this year was asked by a visitor what the red things hung in a tree were.  Have we forgotten that apples grow on trees?
-One last little one, just for me:  I finally realised a month ago that, until now, in Western Colorado, when I use the term "Rock garden" with an average person, they thought I was talking about those yards completely covered in gravel, maybe with different colours of gravel, maybe with some big stones here and there, and not necessarily any plants in it.  I was
truly humbled by my unclear terms. 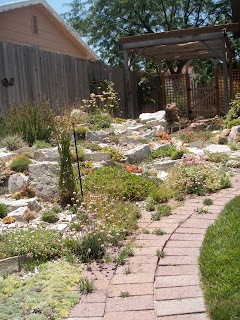 
Let us think about how dangerous it is to make decisions about ecology as a society when we have so far removed ourselves:  i.e. How can we buy and spray pests (bees/wasps) when we don't even know what they are?  How can we vote on an issue or decide what kind of things to buy which feed into or derive from nature?  This includes our own food.

Let us not criticise.  Let us fix it, one neighbour at a time.

We must know about nature for the sake of nature.  We must undertand it, too, for our own sake, which is the angle from which comes Richard Louv, Author of Last Child in the Woods, in which the point is made that exposure to nature is critical in a child's (read: person's) health- mental and physical.


People.
Like all great causes and hobbies, both words which will describe rock gardening and plant collecting irrespecitvely: the actual action of gardening is soulfood in a world that can feel, at times, so tedious and perilous, while fixing that very problem.  I have sold perennial flowers to so many lawers, airline pilots, shrinks, accountants, professors, and realtors who expressly use their garden as a sanctuary- mental, physical, and emotional.

People, too, are brought together by seed exchanges, plant sales, construction too heavy for one person, and moments like a planthunter arriving into a village looking for a certain wildflower, only to enlist a local, which results in the the two people exchanging different ideas and experiences while actually having one together.  Plants bring people together. 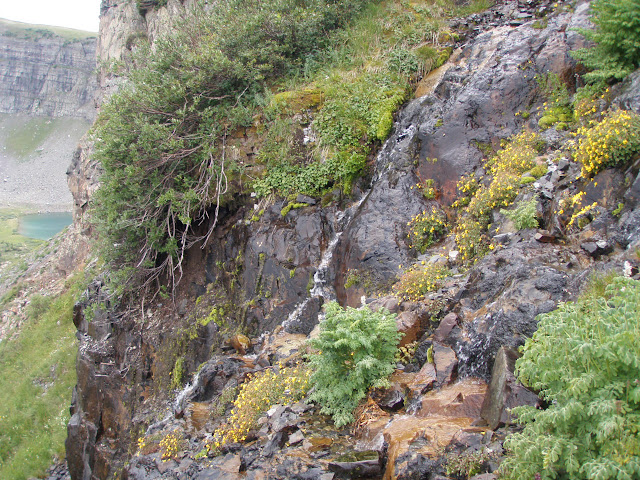 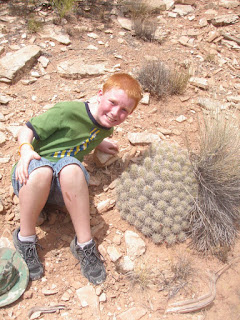