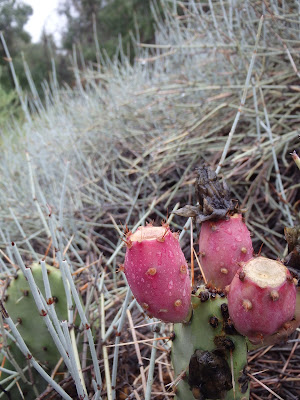 I collect mormon teas, aka joint firs.  Plants in the forty-some species-rich genus called "Ephedra" from  pretty much all the major dry places on earth.  From Patagonia to Mongolia to the Sahara Desert to Utah, USA. Look it up if you want to know about some species' medicinal properties and that history, it won't be covered here.

Wouldn't it be nice if there was a mormon tea/ joint fire species which never suckered? (The common green Ephedra viridis rarely rarely does, but it can...)  Wouldn't it be nice if it were a shorter, manageable size,  maybe blue or grey or silver instead of green and please- while we are asking- could it not only still be like the best of the Ephedras  which grow in perfect health and quality without irrigation- even in arid climates, and oh-yes, too, while we're at it, we want it to not mind ridiculously heavy clay; Bentonite clay, even. 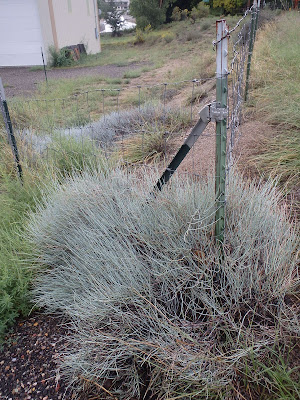 It's not a perfect swap, but it could replace the taller, (and more showy, fruit-wise) but potentially ravenously aggressive asian "Bluestem Joint Fir" (Ephedra equisetina) which is nicely common in the trade and eating the corner of a parking lot near you. It shouldn't be shunned, but deserves a place where it is allowed to run like a randy horse. 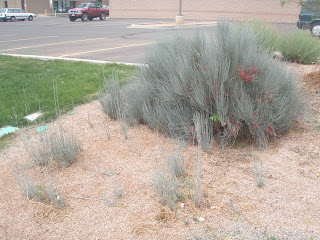 (Ephedra equisetina, playing the part of Hydra in the Odessey, gobbling up earth and growing back worse each time it's hacked)

Like many (if not most) Mormon Teas and no more than 99.7% of humans, Torrey's Mormon Tea plants are either male or female.  Their flowers get dangerously close to what one might call beautiful in the spring, and the female produces papery cones (as opposed to berry-like cones in other species) in early summer. 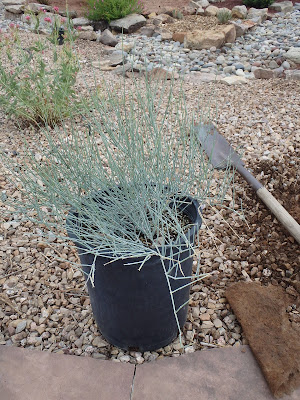 Problem: almost no one grows this.  That is to say, I think there is literally only one source to buy one on this fair glossy planet (aside from digging a wild one up, which is not recommended for either conservation nor practical reasons) :  Chelsea Nursery near Grand Junction.  I just bought a glorious-fat-healthy-#5-pot Ephedra torreyana from them to plant for a client this week; it did my heart good and got me thinking, with hands in dirt, that there was little info on this plant on the web.  Travesty.

I confess to allowing this underappreciation by not taking more pictures of it; I take it for granted. 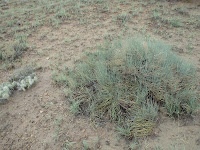 Now, the fact that almost no one grows it can be amended easily, since I am pretty sure I collected a fair  full bag of seed this year that needs to find a nurseryman/woman who will convert it into a field of Torrey's Mormon Tea.

Let's poke holes in the curbs to let rain penetrate Box-store parking lots' grave-style shrub-medians and replace the unruly pissed-off Junipers with Ephedra torreyana, whose ultimate size would require less/no pruning.
How many megabajillions of gallons of water per year (that converts to money, dude) could be saved if we did that?

Eh, it's better not to think about it.
But rather to do something about it.

Public Service #5: The Olympic-Dive-Propagation of the Self-Cloning Native Gourd

It is well documented that this aggressive perennial native squash-vine can increase its numbers by layering (or "spreading" by "runners") of its long, above-ground stems.  Like a strawberry, but not really.  And meaner.

Here are some pictures that betray how the plant seems to do this not accidentally (where the stem may touch the ground randomly) but deliberately:  the tip of its long stems make a very purposeful poke into the soil.  Note how this particular shoot's leaves are reduced and there is a nacent root forming before it has reached the actual soil.  I am not sure how the plant determines at what point these growth tips do this: after many feet (6-20' or more) of trailing along the ground like a great crazy snake, it moves in slow-motion-mimicry of a dolfin,  rearing up a bit only to point immediately downward and dive into the surface. 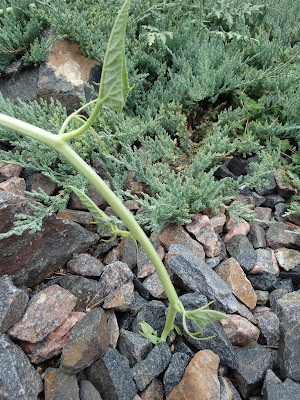 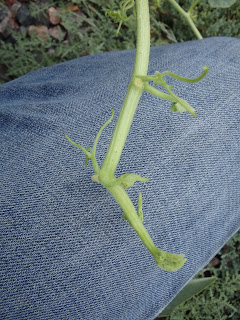 Here, the tip forces a root into the soil, and the tip turns upward again back to unfurl more leaves, and will form its own new perennial plant if there is enough time before the frost.  A little like a starfish, a little scary.  Brilliant self-cloning technique on behalf of this monster plant, considered a "weed" by some, and "just plain cool" by others that know there is a place for every plant.

Note the small white bump issuing from from bent-angle bit of the stem.


(Plant pictured is in the Cactus"Arboretum" of Timberline Gardens, Arvada.)
Posted by Kenton J. Seth at 3:34 PM No comments: