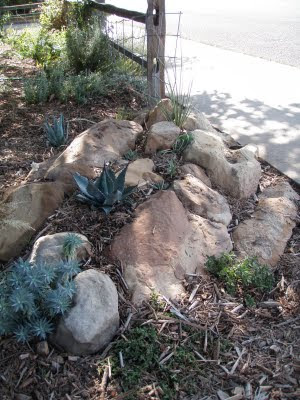 In a brief visit back to Grand Junction, I built a small experimental rockery. Using local stone and inspired by local formations. It is basically a re-build of an accidental miniature rock garden that accidentally succeeded in that location. 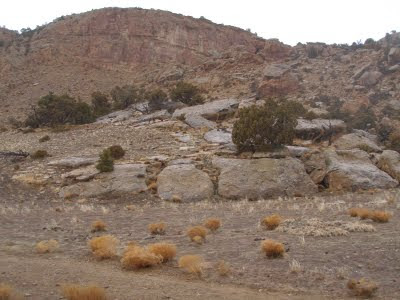 This is one of my favourite natural sandstone outcrops near town, halfway up Mt. Garfield. Note the interaction of soil and rock, and location of plants. Naturally artistically composed.
I love this look. 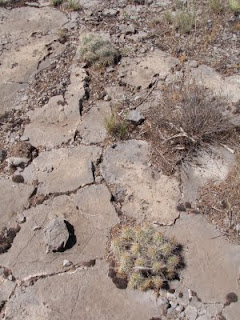 Natural desert Crevice Garden. Hedgehog/Claret Cup Cactus (Echinocereus triglochidiatus) Somewhere near the mouth of Ute Canyon. I think this proves that a desert crevice garden is feasible. Those cactus seem to be liking where they live. 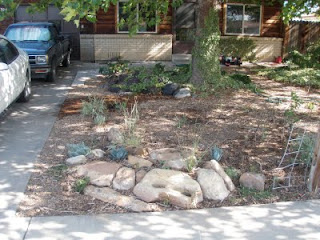 A view from the street. There are extraneous temporary rocks on either end that are intended to keep frequent neighbourhood dogs from trampling surrounding plants when they are young; but they will stand on their own once established. I assumed this was no great place for a rock garden until I realised that flowers had indeed succeeded there, much by accident, as the tree matured and shaded more of the area. It does get full hot south sun in spring and fall, as well as some four-plus hours each afternoon. This was enough to grow some old Veronica, emaciated Zauschneria, a colony of Fritillaria uva-vulpis and a Helianthemum in dry shade in clay. Often, I think that stressful dryness keeps otherwise sun-loving plants from becoming leggy and tender in the shade.
Only one wheelbarrow of soil was added for height, and as one can see, it is rock-intensive; in the style trying to appear as an eroded outcropping. Stones divert water to the cracks between, where it is trapped and cooled under the stones. Young plants are forced to grow deep roots to bypass the stones before they spread out and will likely subtend and embrace the bottoms of said stones.
Artistically, drab sandstone was chosen to reinforce that they are each simply components that form a whole, and are meant to be visually submissive to the interesting and often loudly spiky plants.
It is a small stretch of only some eight feet, and I fancy I shall add a couple outlying and small stones to make more unity between the rock mound and the flat surrounding soil itself. ( I also just picture another nice fat Rosemary just behind to give some taller shrubby mass to relate down to the rock mound...) I know that should the Agaves favour this position and grow into it, they will overwhelm and hide their nearest rocks, and that is just dandy! (note, too, that the blue monster to the left is not, indeed, the beastly noxious Myrtle Spurge, but the Mediterranean stiff spurge, Euphorbia rigida. It was planted in that corner this spring and was luxuriously successful, beckoning the construction of a larger rock feature)
Stay tuned to see how on earth one can relate and reconcile the divergent styles of an ivy-mulched (read: evergreen and lush-looking) dry-shade near-buried basalt-boulder rock-garden swath nearer the house with a grassy, sagey, sandstone rock garden. I myself shall be interested to see how it is done.
This rockery is actually just an outlier itself, and will compliment a larger rock garden across the driveway which is still under construction, which waits for the builder's energy to be enough to handle its several-hundred pound components once again.
And one last picture to justify my design!: 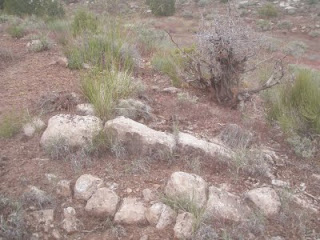 August 1
is the 135th Anniversary of Colorado joining the union as a State.
And what a fine state it is. 'Tis a privilege... 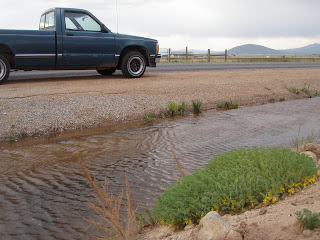 Corydalis aurea is a Colorado native yellow bleeding heart. I'm pretty charmed by them. (not too far from Fairplay, Colorado. ) 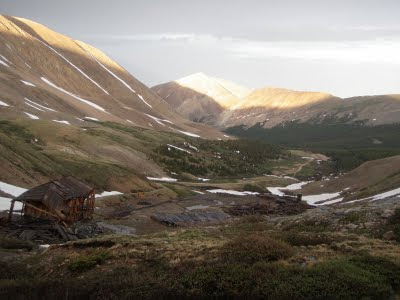 Looking East from partway up the side of Mt. Sheridan, which is shoulder-to-shoulder with the more famous Mt. Sherman (a 14-er) to the North. 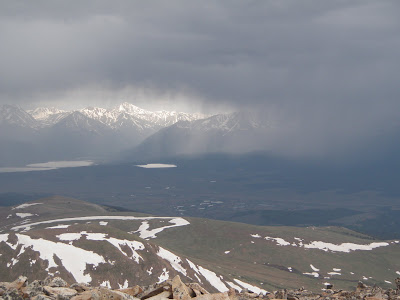 At the top of Mt. Sheridan before I did that thing that all mountaineering books spend their introductions warning you about: getting caught on a peak in an afternoon lighting storm. I often hope mother does not read this blog. 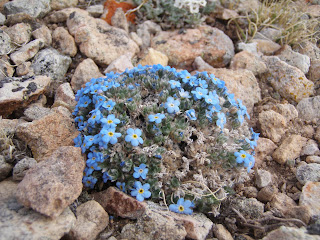