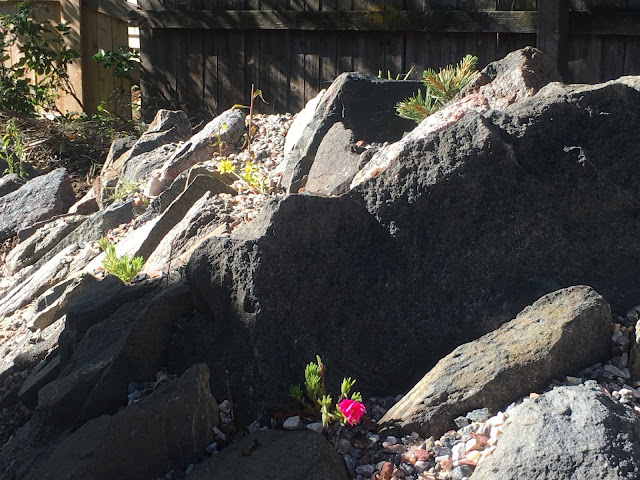 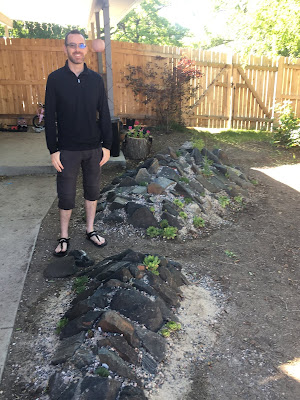 Van Milton and I worked together on two crevice gardens- he recorded many of the thousands of plants we put in at APEX in spring 2015, and he helped place stone in the last section at  the Cheyenne Botanic Gardens this March.  He interned and worked seasonally at Denver Botanic Gardens as well with giants like Mike Bone, their Steppe Curator.  He's not letting his skills rest, and contemplates some Landscape Design in his future; there are some stunning crevice garden concepts in his sketchbook that make the hair on my arms stand up.

Van built this Crevice Garden, one of the finest I've seen, at his friend's home in Broomfield, CO- a backyard off-the-side-door kind of space next to the family's multi-use area and firepit.  Beer and fellowship flowed on evenings and weekends while they used mostly salvaged rip-rap stone from the site to build to Van's somewhat yin-yang design which puts envelopes a viewer in a sort of perenthesis of small but formidable set of mounds- it's predominantly a matt dark gray basalt, but they did supplement with a couple pickup loads of new purchased material. 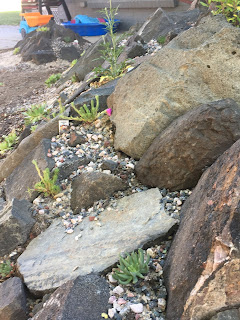 When someone new to a thing enters it, they bring a freshness, not burdened with all the tradition or rules: I'm so glad no one told them that "a crevice garden isn't for annuals:"  The homeowners did their homework, researching rock garden plants ahead of time, buying a bunch from the Denver Botanic spring sales, but perhaps more notable- they planted annual Portulaca, which is a brilliant choice for an annual in a crevice garden.  Moss Rose's love of gravel may invite them to reseed nicely and be colorful filler in beginning years.   Either way, they looked fantastic  when I visited them with morning light igniting their magenta against the stark charcoal tones of the stones. 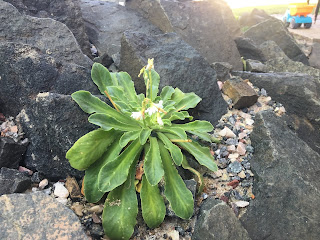 Perennials from DBG's plant sale are already taking foot- like Lewisia, which has been a classic success story staple in Denver area crevice gardens. So many folks have opined that Lewisia prefers a slope. 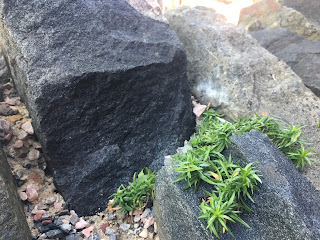 A phlox, despite being so new, already shows its character and gives volume to a nearby rock.  It should be a great show next spring, hopefully further addicting the owners to their new crevice garden.  I really enjoy the austere character of the basalt slivered stones against vibrant greeny-green plants.  Van plans to lace the garden with mixed small crocus.  Another thing I'd never think to do because of my own design habits which basically restrict me. 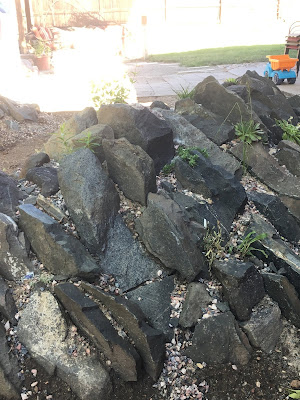 The growing future of Crevice Gardens shines on with young new families and with new minds like Van stretching the boundaries and incorporating new themes into design.

I can't wait to see where he's going to go after this.