Here is a grass that needs internet documentation as well as promotion into Horticulture. 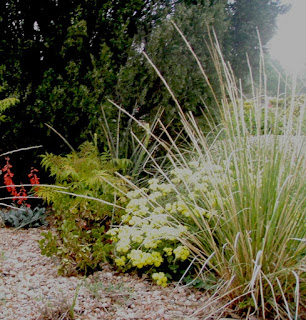 Achnatherum scribneri  (AKA Stipa scribneri) or Scribner's Needlegrass.
{Eriogonum umbellatum 'Shasta Sulfur' and Penstemon alamosensis in background}
Until now, there were literally no pictures of this thing alive on the net. 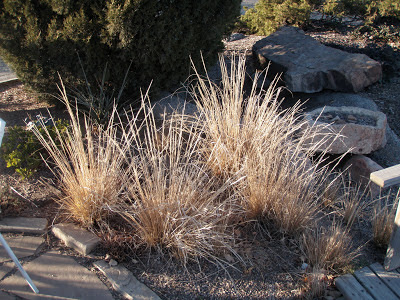 Achnatherum scribneri is native to Colorado and a few other Southwestern States.  A warm-season bunchgrass rising some 2-3 feet tall and a little less wide, the stiff stems hold up against snow while they are a quite attractive natural-blonde.  The above wintertime picture is in an unirrigated grouping of them at Timberline Gardens, where this species is perhaps sold nowhere else in the world.  Seriously.


It was supplied to Timberline by the great Texas/Colorado Gardener/Plantsman Tom Peace, who found it in the Crestone, CO area.  It was labeled in the nursery for some time, lacking a real identity, as "Muhlenbergia 'Stud Puppy'".  That "sexy moniker" encouraged those with a sense of humour to try it and for some years, Denver gardeners have begun to enjoy this durable plant in their dry gardens.
I write this post because tonight, having wanted to share it for some years, I've finally found some pictures.  More importantly, I finally managed to identify it scientifically based on deliciously obscure and sometimes painfully confusing botanical academia.

This is a long-lived and rock-sturdy species one could use to dominate a very dry meadow that wants a tall (but not very) tall grass whose round, clumping form will allow good foot-space for neighbouring wildflowers.  The dried leaf/stem material from prior years is acceptable to warrant not giving this plant a traditional yearly haircut.  Mr. Peace notes, and I can agree, that it grows in either clay or sandy soil, despite hailing from sands specifically.

Let me sum up the key details- extremely dry growing, long-lived, low/no maintenence.  Yet rare as an ornamental.   I can't wait to use it more myself!

Fringed Gromwell- That is my favourite of several funny names, including "Puccoon" for this stunning little darling.

It is new to me this year- last winter my mountain-biking-wildflower-shooting bike-rafting buddies (who convinced me to blog, or rather, cooerced me) told me about a big-flowered, yellow, fragrant borage they saw in the desert.  I didn't believe them. 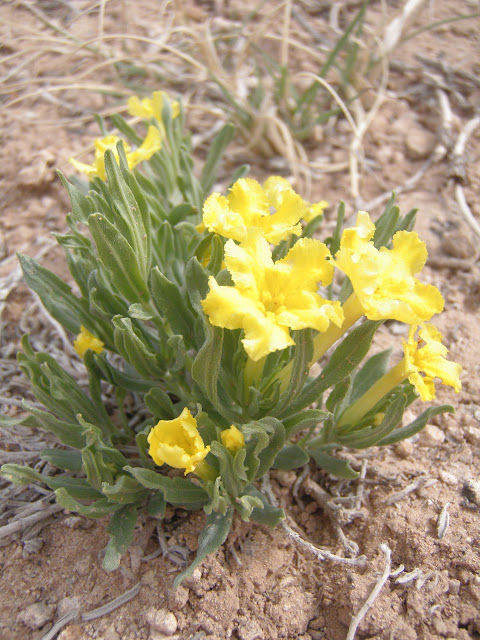 Hallelujah- I am a believer in this one; and now as a new convert, I am incensed to have yet to see it in a garden.  (I know it has been done) On my side of the mountains, it is few-and-far-between (but growing everywhere). It blooms  in Mid-April.  Rain increases both the size of the plant and the longevity of bloom, which, as a borage, can continuously bloom for a nice spell.
The flowers are not small- almost 2cm wide if I recall accurately, and they are fragrant in that fresh, fruity way.  In this summer of drought, the plants simply retired to a dried-up crisp so as to spring forth next ...spring. 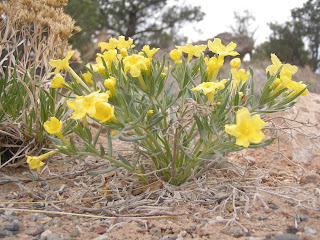 Look at those elegant-sexy flower tubes!  Sumptuous! The seeds are white shiny things that look like parrot's heads; and in this way they are available to gardeners.  Again, what are we waiting for?  This one doesn't have a waiting period for "acquired tastes" like some of the oddballs I enjoy.  It's pretty right now.

The Western Soapberry tree (Sapindus saponaria var. drumonddi, or just plain Sapindus drummondii) is a southern plains beastie who promises to improve the world of small dry-growing street trees.  Only a few are familiar with this charming plant, and even fewer are actually using it.  And it is done. 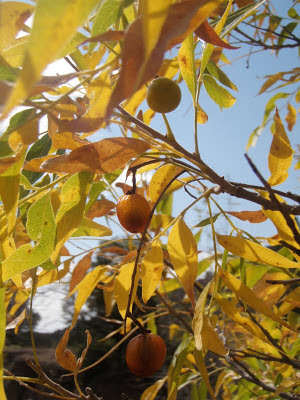 I first met this plant as a kid on my bike; the transparent plastic-like dried seed capsules ("fruit") looked liek so many independently solar-powered Christmas lights.  I stuffed my pockets with these seeds, which would mix with my marbles and jacks as playthings. 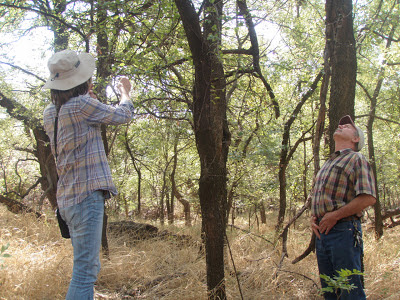 Nothing's changed, really.  Last October, my dear friend Sonia and I went to Oklahoma to visit a grand gentleman who grows and utilises it very well in domestic plantings.  Steve Bieberich of Sunshine Nursery  (Clinton, OK) is perhaps one of the finest and humblest plantsmen/nurserymen I've met. (I've met a few...) He grows potted landscape trees a year faster than your average bear, but holds onto them to have a year-older root system, which dramatically increases the success rate of his plants in general.  What a guy. (Pictured above, right, admiring a "Gum Bumelia" or "Chittamwood": Sideroxylon lanuginosum) 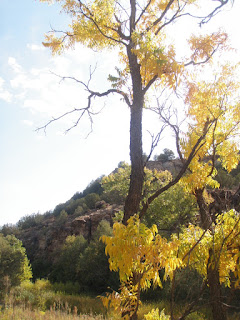 We also swung through the South-East corner of Colorado where the trees natural range just pokes into our fine state, just in tiem to see the canyon-bottom dwelling Soapberries turning yellow.  ("Near" Kim, Colorado, USA) 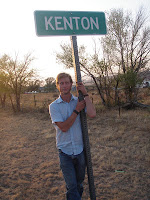 It feels like a good omen to pass through a town that is your name.  I felt a wierd sense of proprietorship for the funny little place. 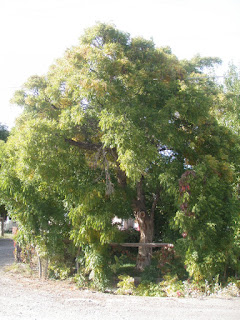 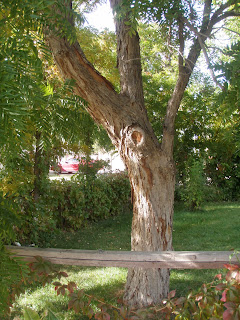 In cultivatoin, it is a fine shapely thing.  Round.  Nice, eh?  Maybe 20 feet tall at absolute maximum.  Small leaflets are easy to clean up or ignore in fall.  The decorative fruit are not pavement-greasing things like crabapples, but stay on the tree, so there are always golden orbs to be enjoyed in low lighting.

IMPORTANT FACTS are these:  as a nursery subject, it does not like overwatering.  This sensitivity is not extreme, but it is important.  Young plants are tender (many call this plant a zone 7 ot 8, where a healthy plant is probably really a zone 6).  Denver Botanic Gardens has one, and there is a naturalising group of them in Clifton, Colorado.  I have watched the above tree survive (with no ill effects) having been unwatered for years  (Clifton, CO: 8 inches of annual precip.) when the property was either empty or rented.

LAST IMPORTANT FACT:  This plant grows a little (not a lot) slowly as a sapling (for nursery-growing reference) and is not "traditional," and has thus avoided widespread use as a wonderful dry-growing street tree.  Let's stop ignoring it and try it out. 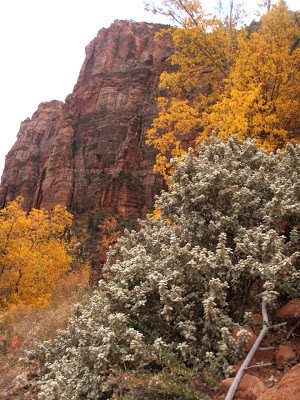 "Hanging Gardens" is a technical term.  Really.  It's in Stanley L. Welsh's "A Utah Flora."
And Zion National Park in Utah, USA has them.  This early November.... 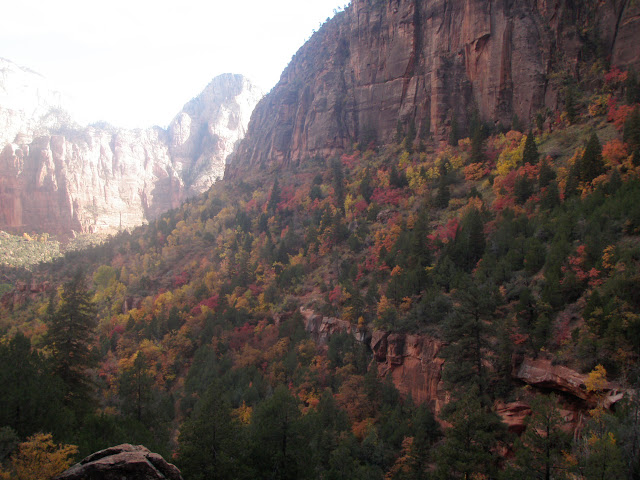 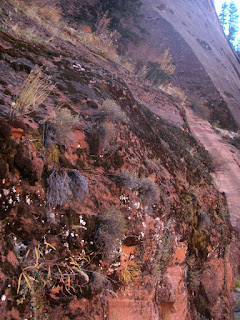 While the big guys awed, the little guys intrigued. So much diversity grows in the cracks and fissures (this is a natural crevice garden...) of diverse sandstones in Zion.  Despite being unremarkable this time of year, I kept being attracted to the night-blooming phloxes called Leptodactylon. (unpictured)
In spring, Zion boasts its namesake flavour of the Shooting Star,  Dodecatheon pulchellum var. zionense, quite growable and availabel for gardens (look it up if you don't know it; it is worth it!) which is celebrated in the park's signage and easily seen up-close on the Emerald Pools walk.

Zion is a good place for plant inspiration for dry gardens, as the area gets about 20 inches (50cm) of rain per year, which is weighed against a hot summer more reminiscent of a furnace than one in Denver, say.  Great massive sandstone features channel, divert, and trap a certain amount of this water- a complex situation that favours a delightfully variable hanging-crevice garden flora: 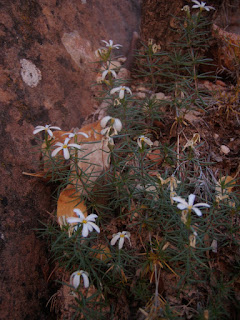 Linanthastrum nuttallii, a new and charming plant to me. It had a confectionary odour that I can't name. 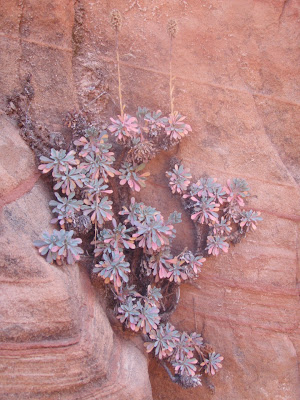 In drier crevices copious Petrophyton caespitosum, or Rock Spirea, (A member of the rose family, no joke, at half an inch tall, and up to a foot wide, well- but plastered to a rock) showed some autumn colour as well as proved often to host: 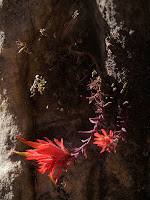 ...the ember-hot and supermodel-sexy dwarf "Rough Paintbrush," who tops my hitlist next year to try growing: Castilleja scabrida var. scabrida.  In botany, it was once called "Castilleja zionensis." 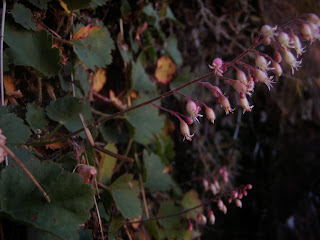 A Heuchera literally hangs out in the shadier places. Generally, one tends to find these lot on North sides, which protects thier evergreen sensibilities from winter sun-burn. 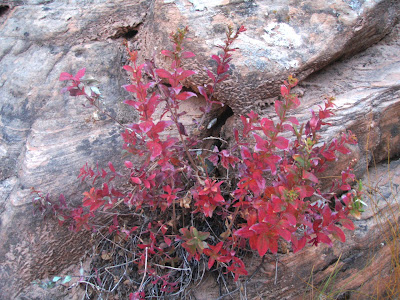 Zauschneria latifolia var. garrettii was the shocker- my first time seeing the "humminbird trumpet" in nature. We rely on this babe to produce traffic-cone orange  flowers all summer long in our gardens, but this wild one shocked my pants off with brilliant fall hues; I feel that as literaly half the plants in the area were like this, it must be a glorious response to the drought.  This special plant was largely popularised by the soon-to-be-much-grieved and recently-closed High Country Gardens in Santa Fe, NM. 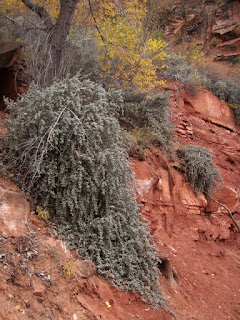 Zion is the only place where I've seen Shepherda rotundifolia hang and cascade downwards with its mirror-glittery leaves.  It is a  much-sought-after-in-gardens evergreen shrub.

This year in gardening seems to have been rough for everyone.  Despite drought and a long, hot summer, nature still clips along, even beautifully.  The plants at Zion don't care that Colorado's Reservoirs are quite down right now, and that a favourite and progressive gardening mail-order nursery has closed, or that my home squash crop was a bust.  It's rather comforting, somehow.

May we emulate the levity and steadfastness of nature.