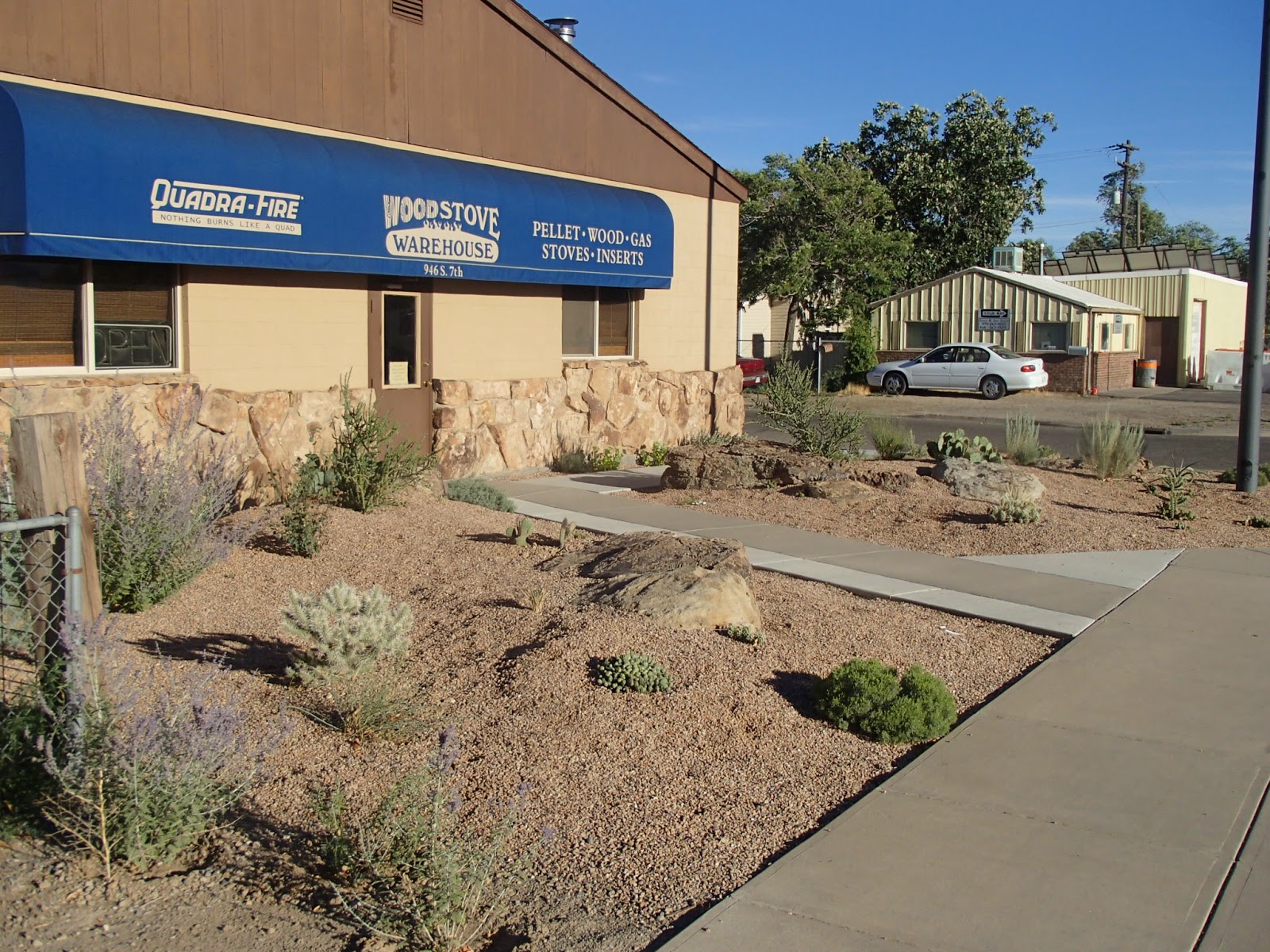 And if I'm allowed to critique my own design, I could stand to have used multiples of one kind of plant in areas, and near eachother to prevent the plant-space-plant-space, dot-dot-dot effect I so abhore.  I've since added a few plants to that end. 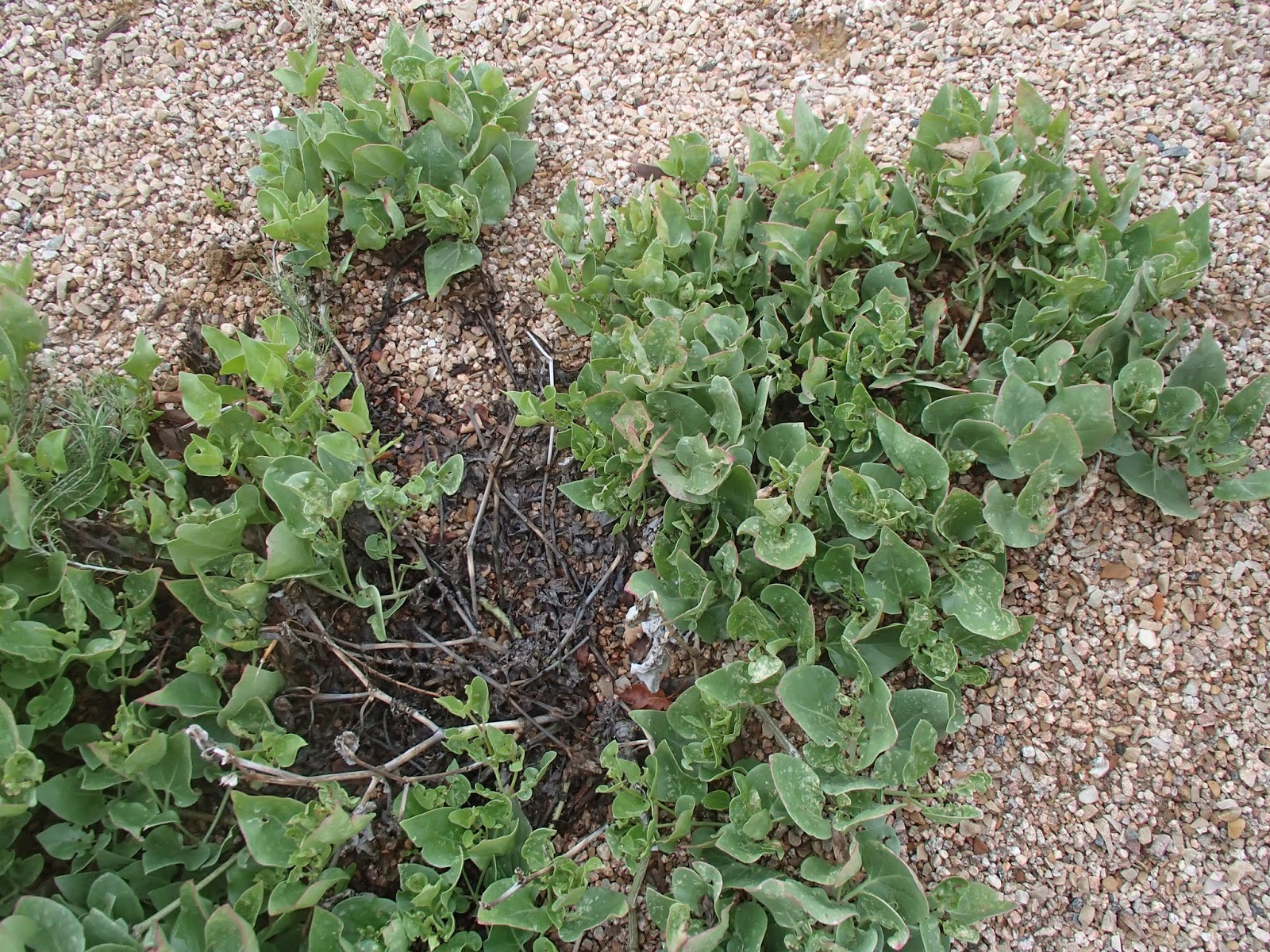 But the secret is that it's salty. The soil is incredibly rich in some form(s) of salts, which I've admittedly not tested.  Especially after long periods of dry weather, a white incrustation even forms on the soil surface jsut visible between peagravel stones.  Around here, it's called "alkali" and is famously visible from your car, covering entire fields, or even miles, in white, where few if any plants, including weeds, will grow.

After rains, it is invisible and plants which suffered from it, like the Desert 4'o'clock (Mirabilis multiflora) above will grow normally for a while, then return to suffering from classic salt-burn symptoms. 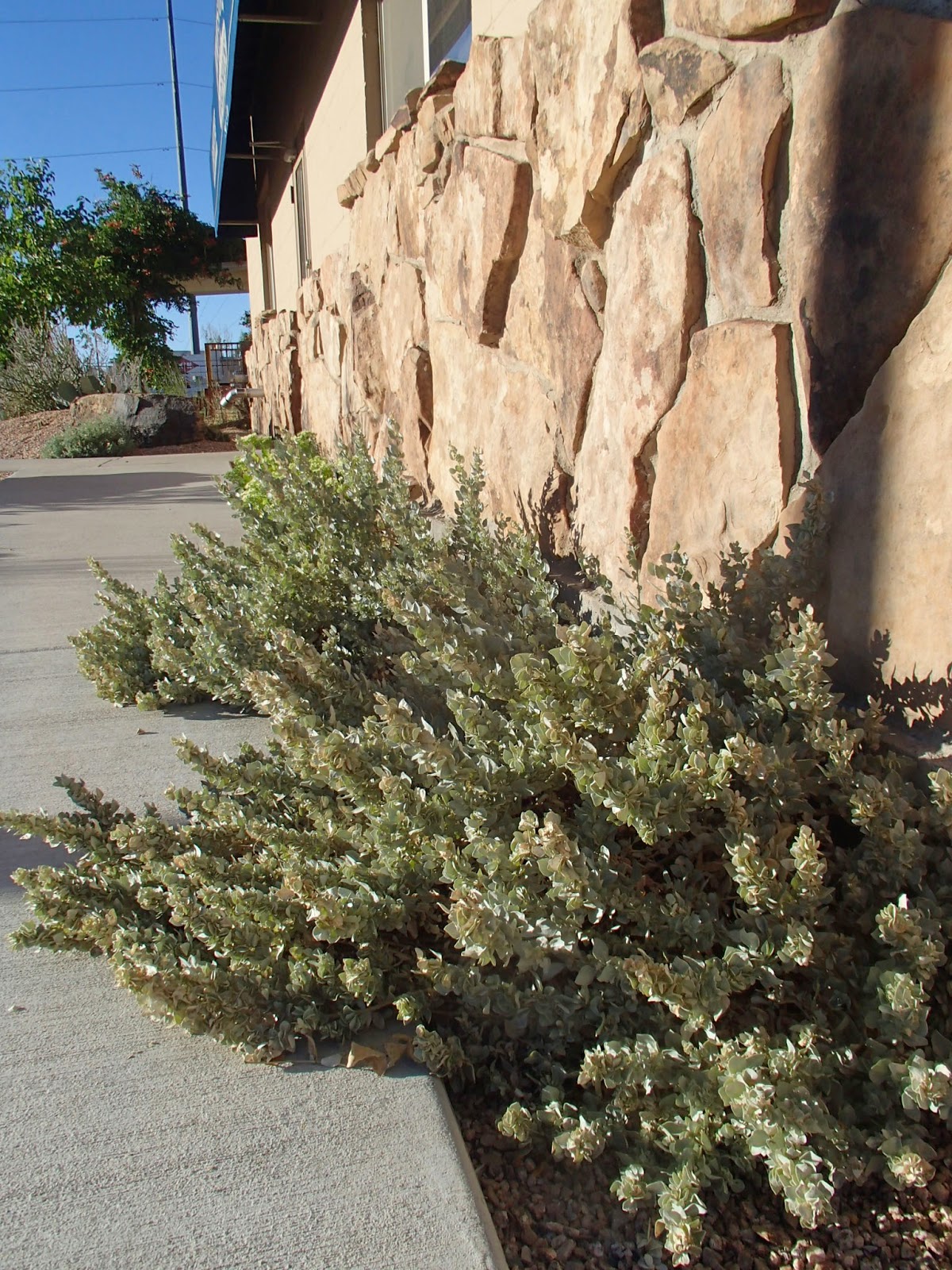 True to name, Saltbrush (Atriplex confertifolia) from Chelsea Nursery
has done great in even the worst spot. 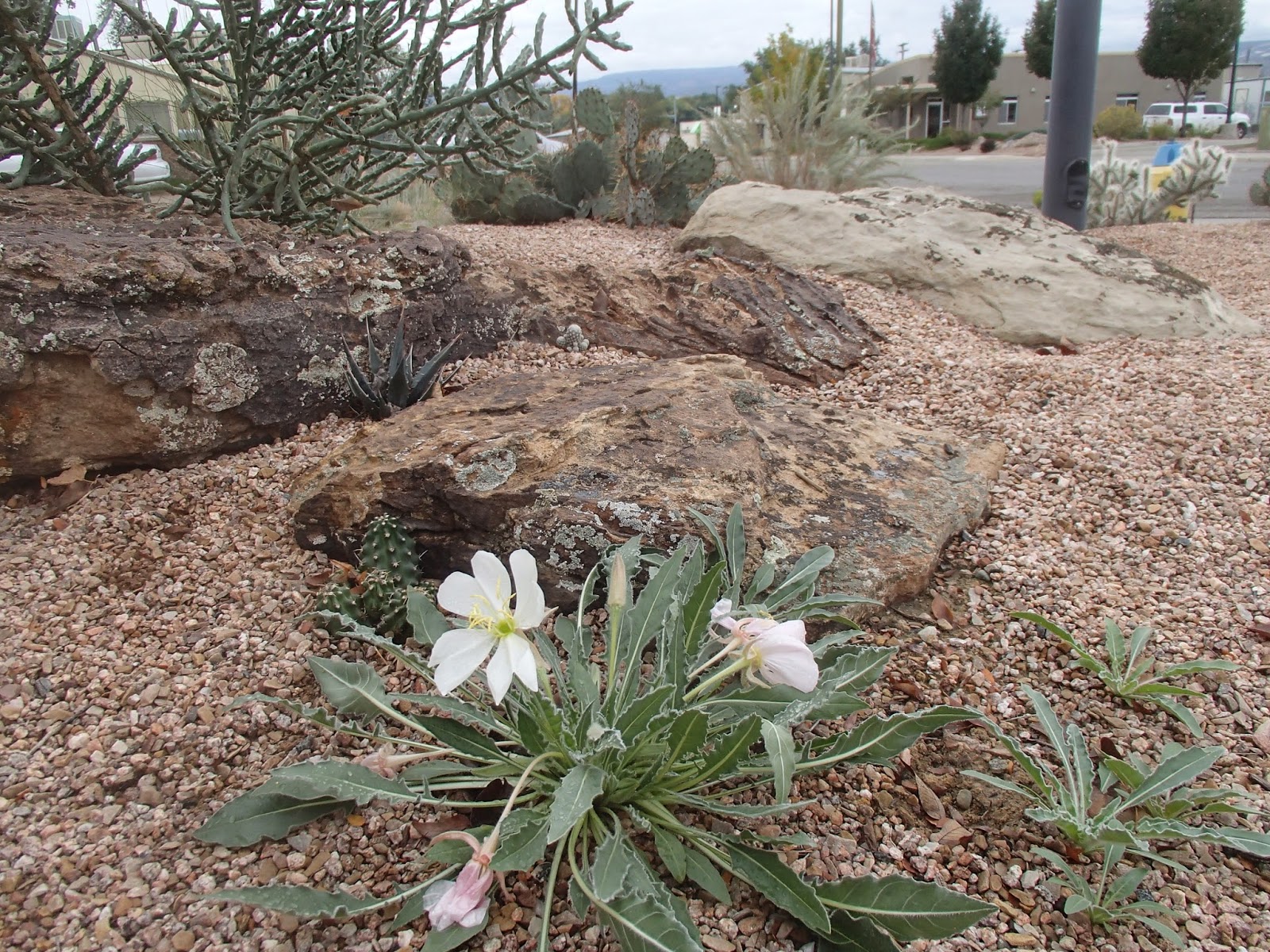 Then there are the intermediate sufferers, like the Desert Evening Primrose (Oenothera caespitosa) who opened a can of Pheonix-style:  It was planted, bloomed, and completely killed when the salt rose up, but upon the salt being pushed down by the monsoons, germinated from seed only to bloom again! 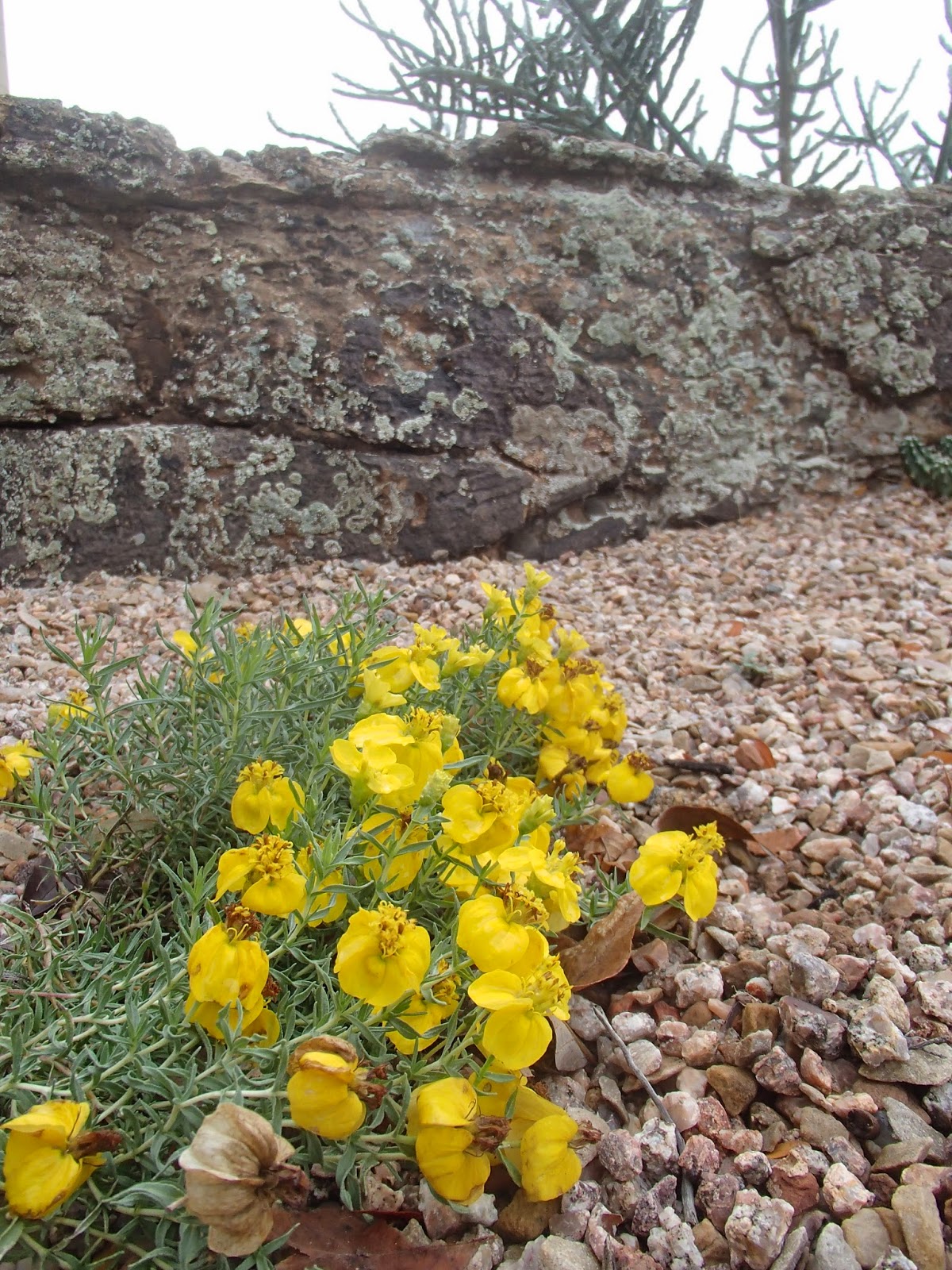 I trialed a list (which will be documented here) of plants I put in the "flowery flower" category to provide colour among the different shrubs, and most of them died, exept this, Prairie Zinnia (Zinnia grandiflora), who has not even shown a modicum of distress. 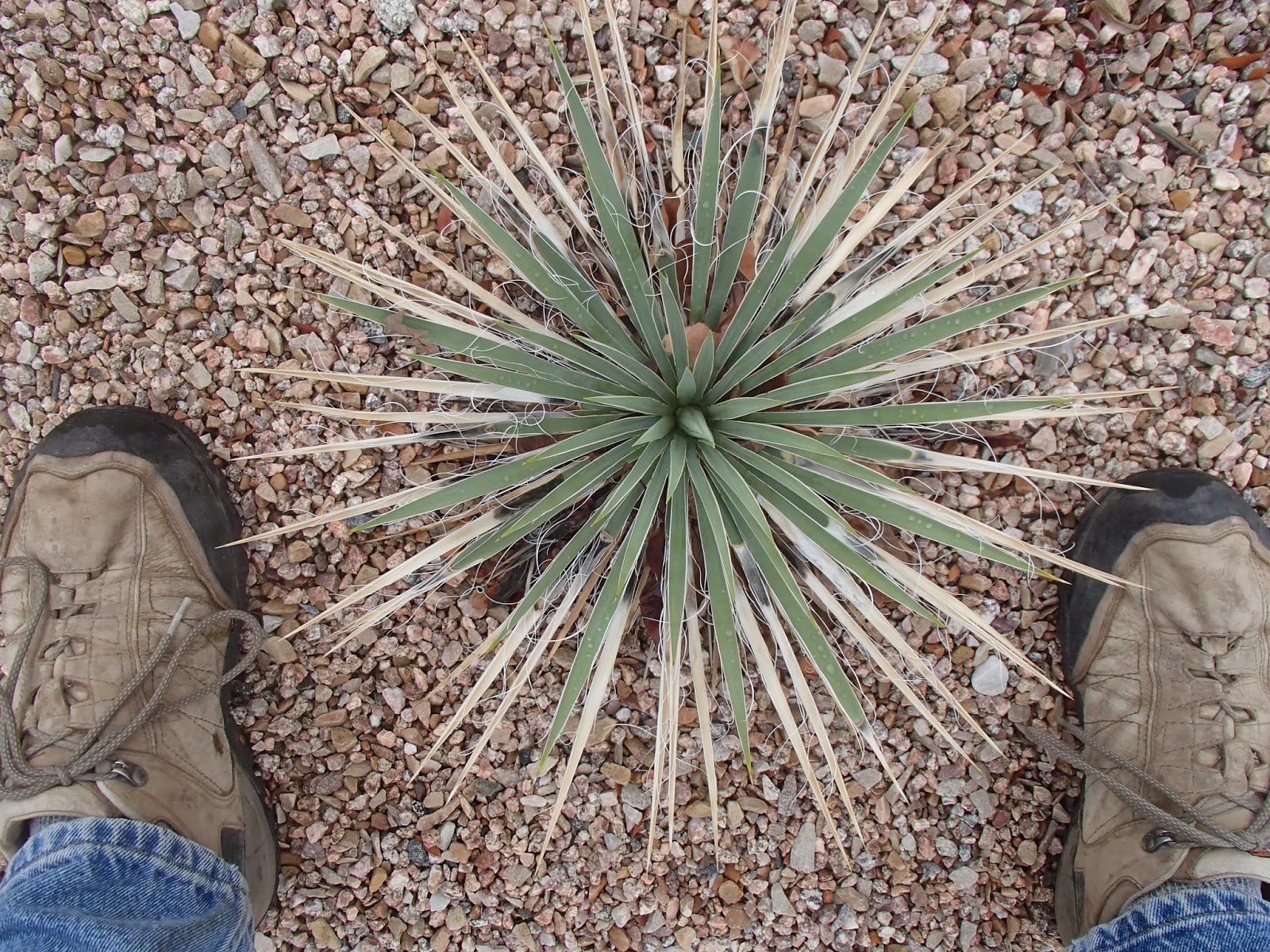 Yucca harrimaniae is doing a funny thing- and this is a classic salt response.  The tips of leaves, epecially old ones, dramatically die- the salt in the plant's body is accumulated there and that part of the leaf is metabolically scuttled, if you will, to rid the plant of some of that salt in favour of preserving newer leaves. Or so the scientists say. 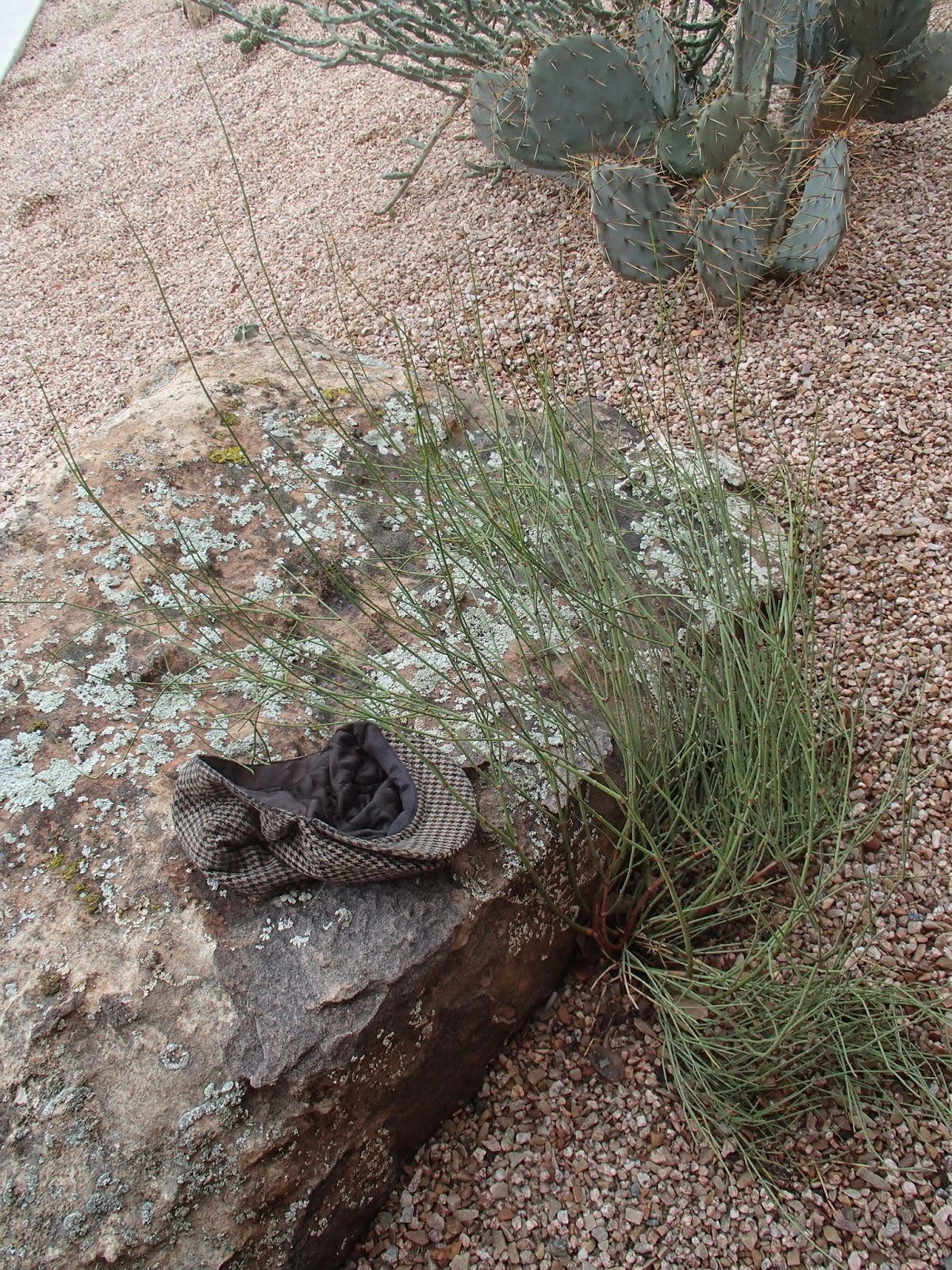 For the record, Ephedra viridis (Green mormon-tea) is zipping along ignoring all traffic signals- this one has grown several feet this year alone. (Amen to bareroot planting, amen.) 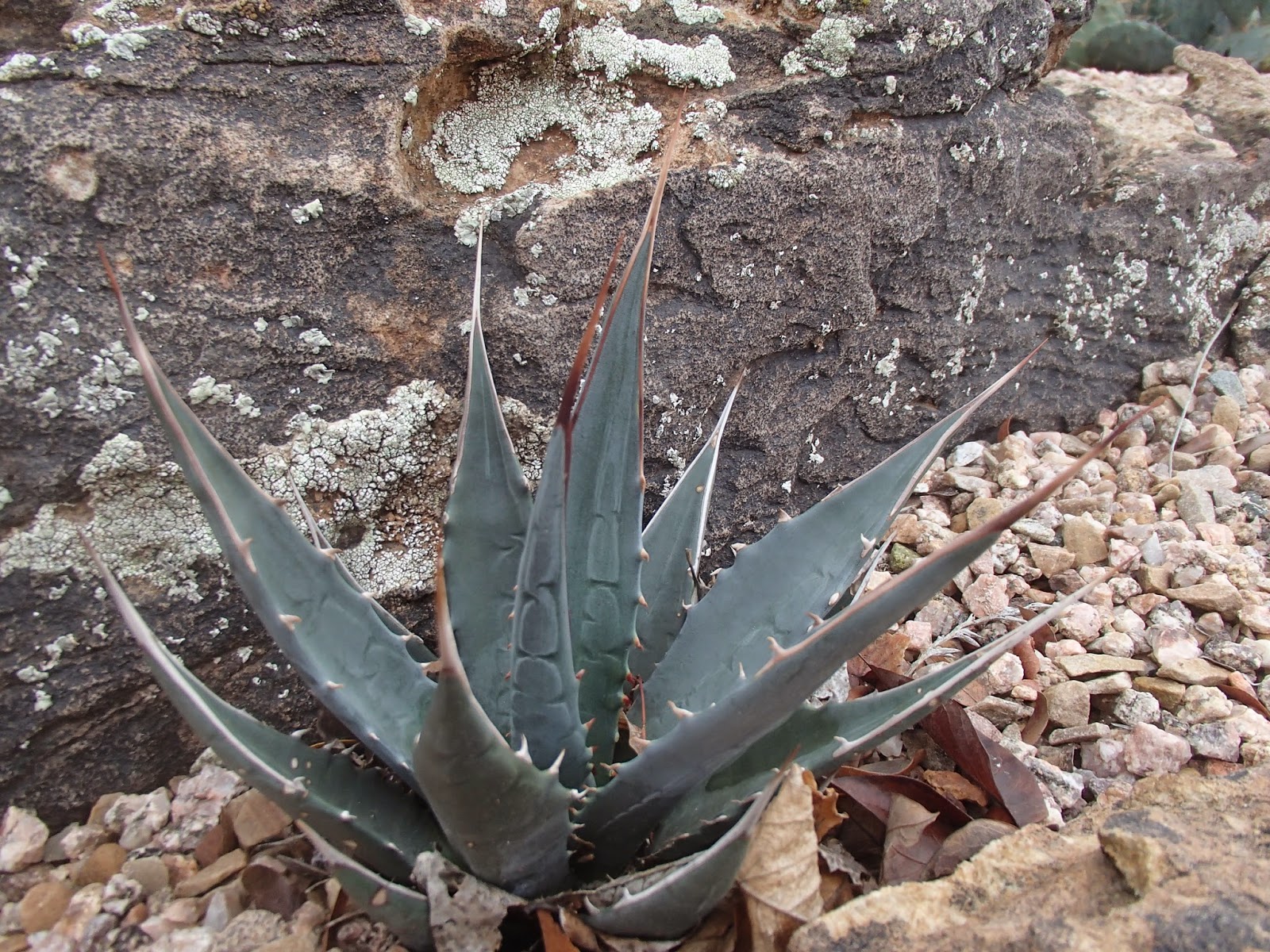 Perhaps it's the position in-between rocks, but the Grand Canyon Agave utahensis var. kaibabensis  is growing stronger here than in my home garden. 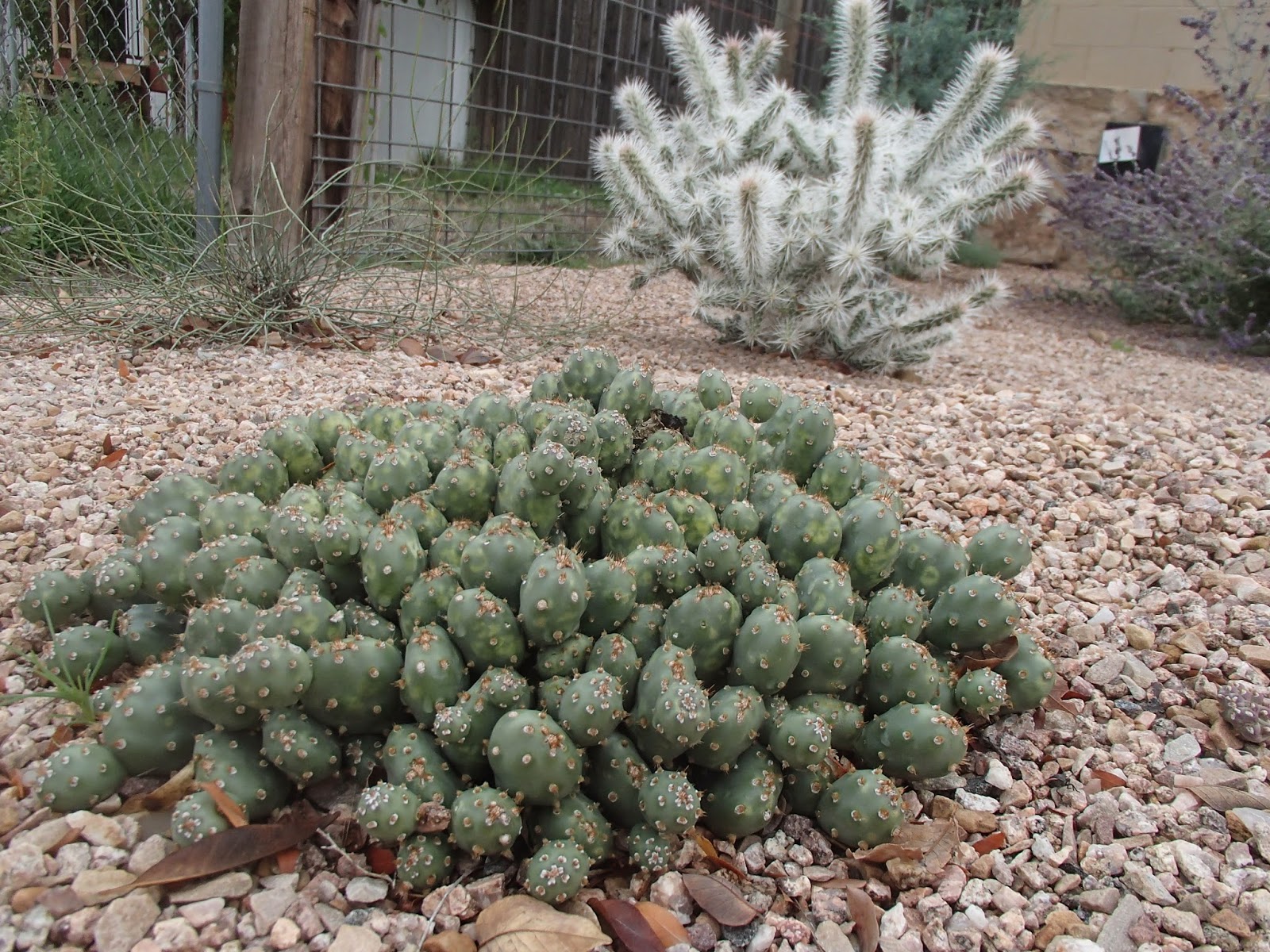 Prickly Pears (like this Potato Cactus, Opuntia fragilis var. denuda) seem only a little slowed-down, and there is a faint yellow mottling, which I cannot conclusively attribute to salt, but that is my guess. 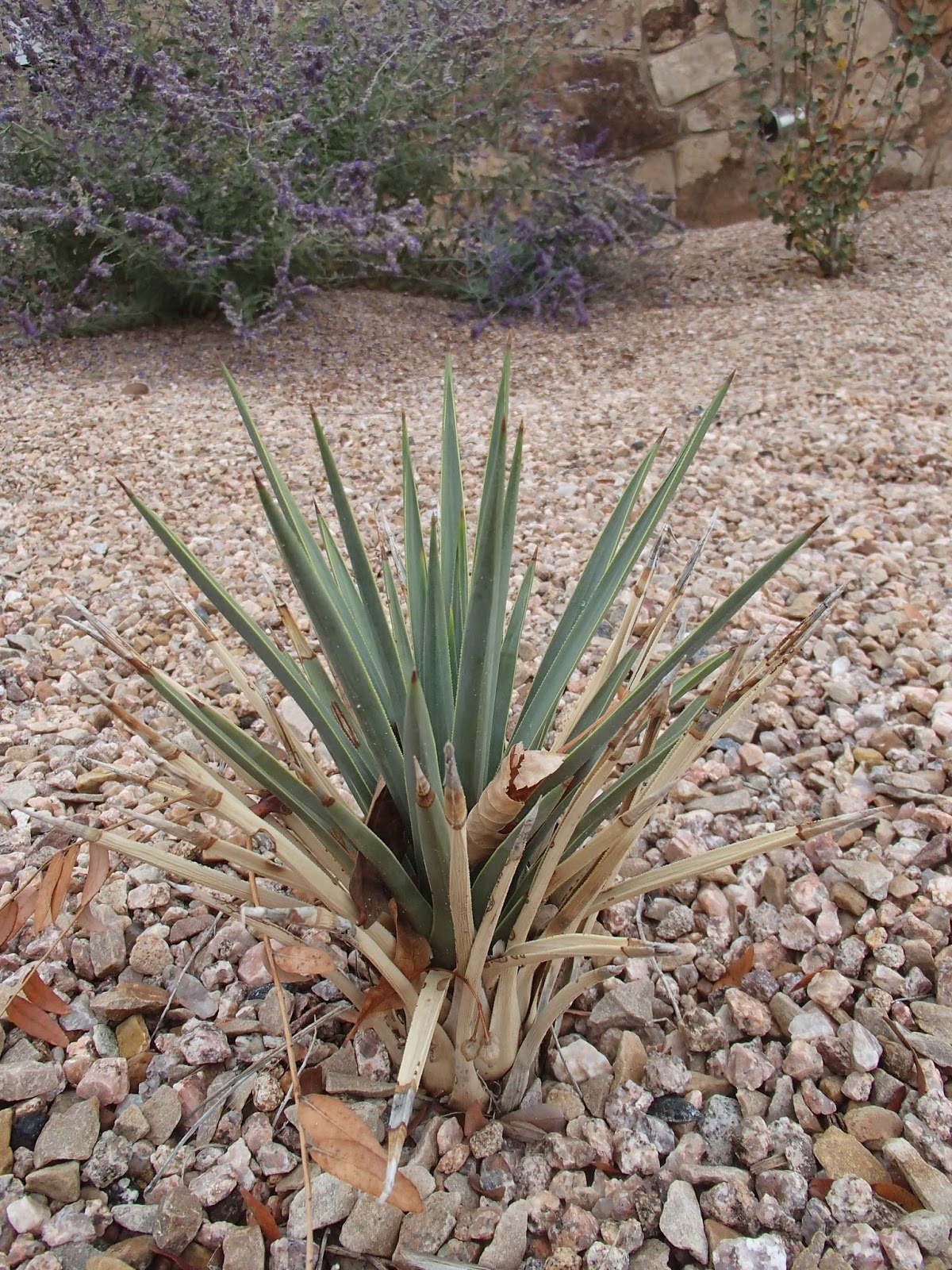 A heroic Joshuatree has pushed through a near-death experience. (Yucca brevifolia) 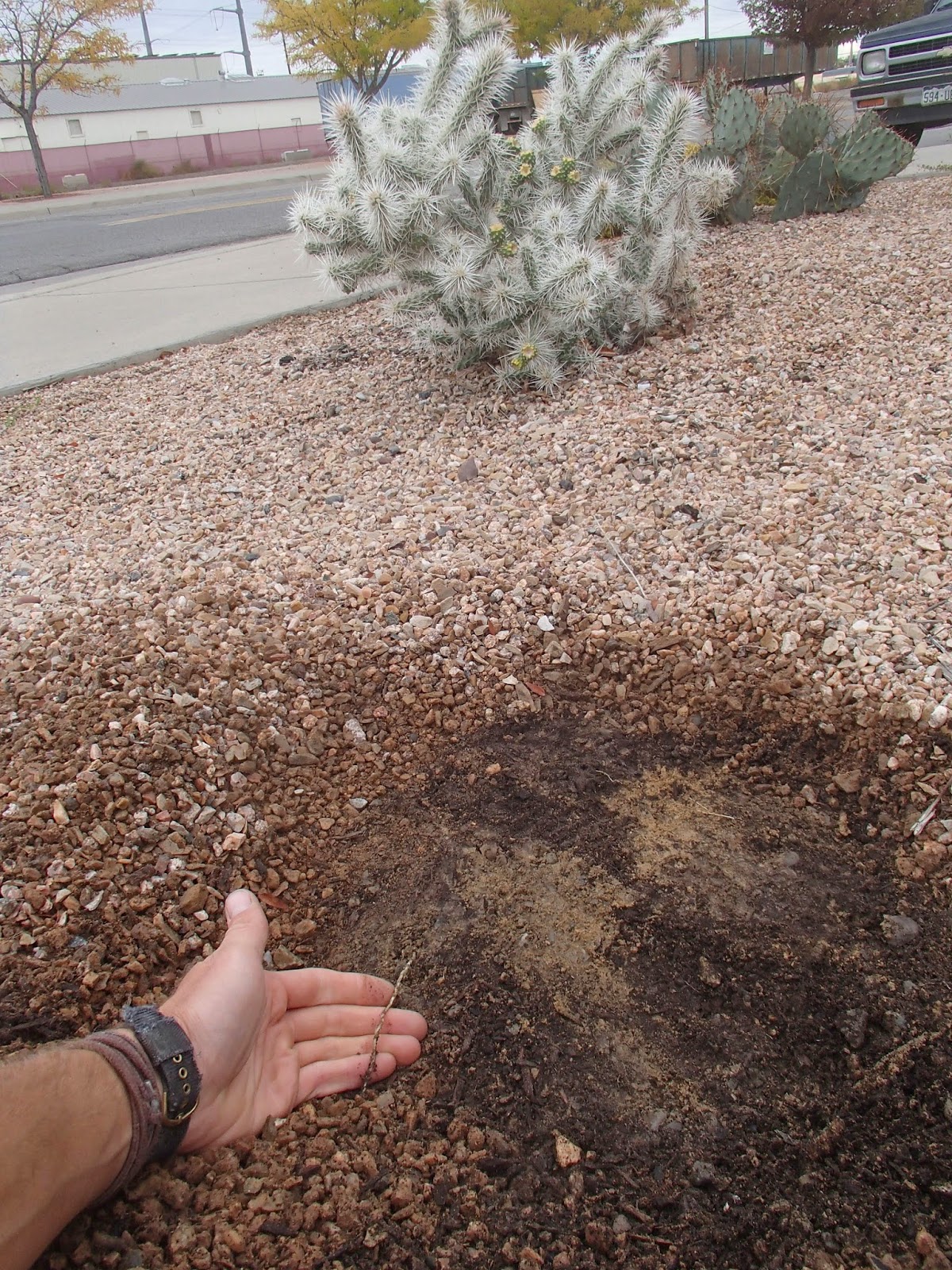 Some Chollas suffered a little in the beginning, but they seem to be steady now, enough to send roots 9 feet away when they are under 3 feet tall themselves.  To say that Cacti are shallow or small-rooted is a gross generalisation!

Now, the meat. The lists of plants.  This is an empirical but non-scientific record of this property, which is not authoritative, but hopefully useful:

Plants on the property, but I'm not sure their feelings about salt:

Upon writing this, I realise I need to try Berlandiera and Penstemon. How dare I forget them in the great procession of death and suffering?

Grasses really do deserve more use in rock gardens.   I hate to ruin the romance of the effect by even desribing it: the trembling impermanent softness of grass against the immobile permanent hardness of stone. 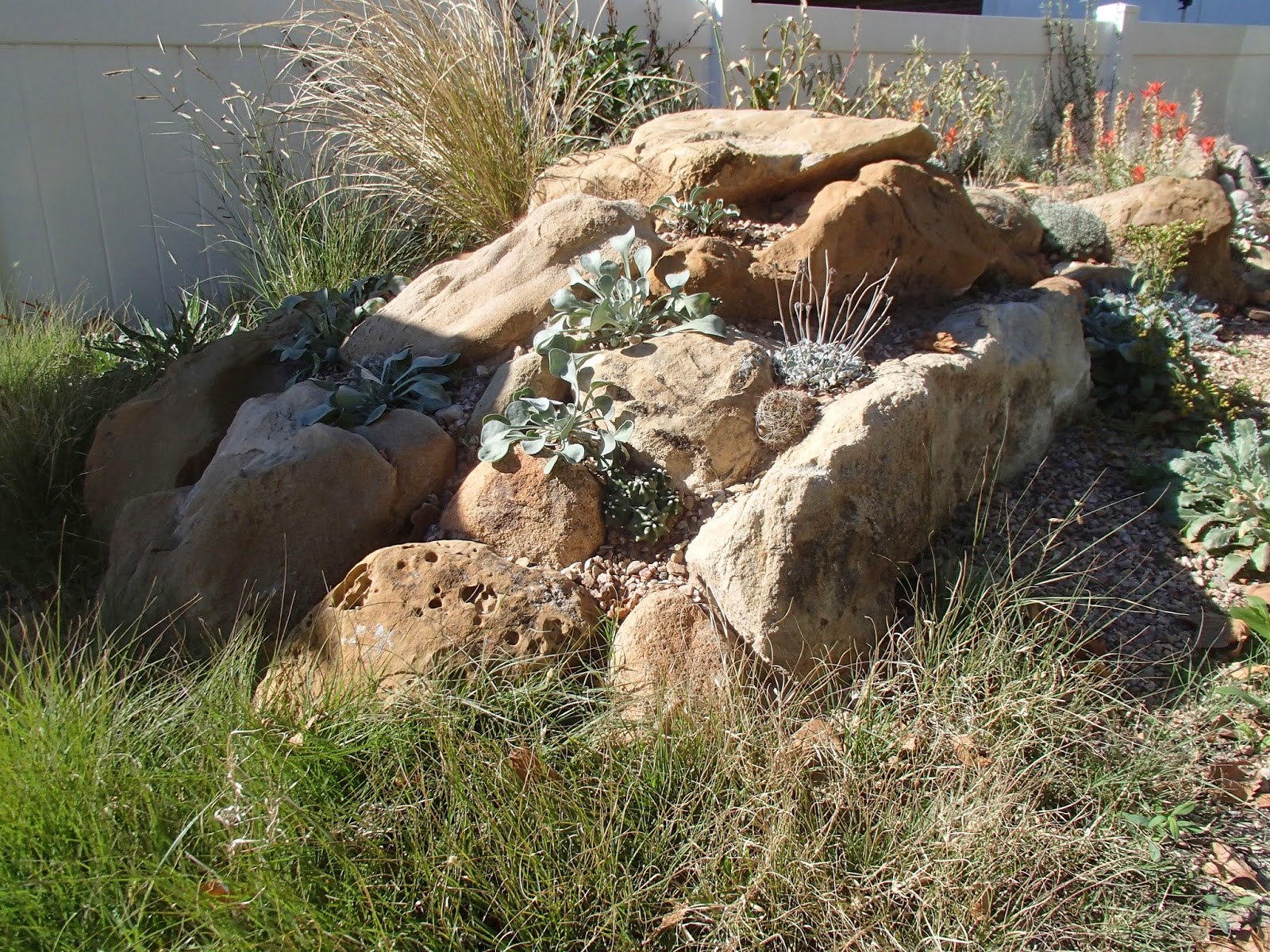 {Buffalograss (Buchloe dactyloides) has suprised me with its irrigationless performance as well as weed-supressing frame for one end of the crevice garden, despite what I'd heard about it; Bob Nold says it will fail to suppress weeds upon being mowed. So I don't.} 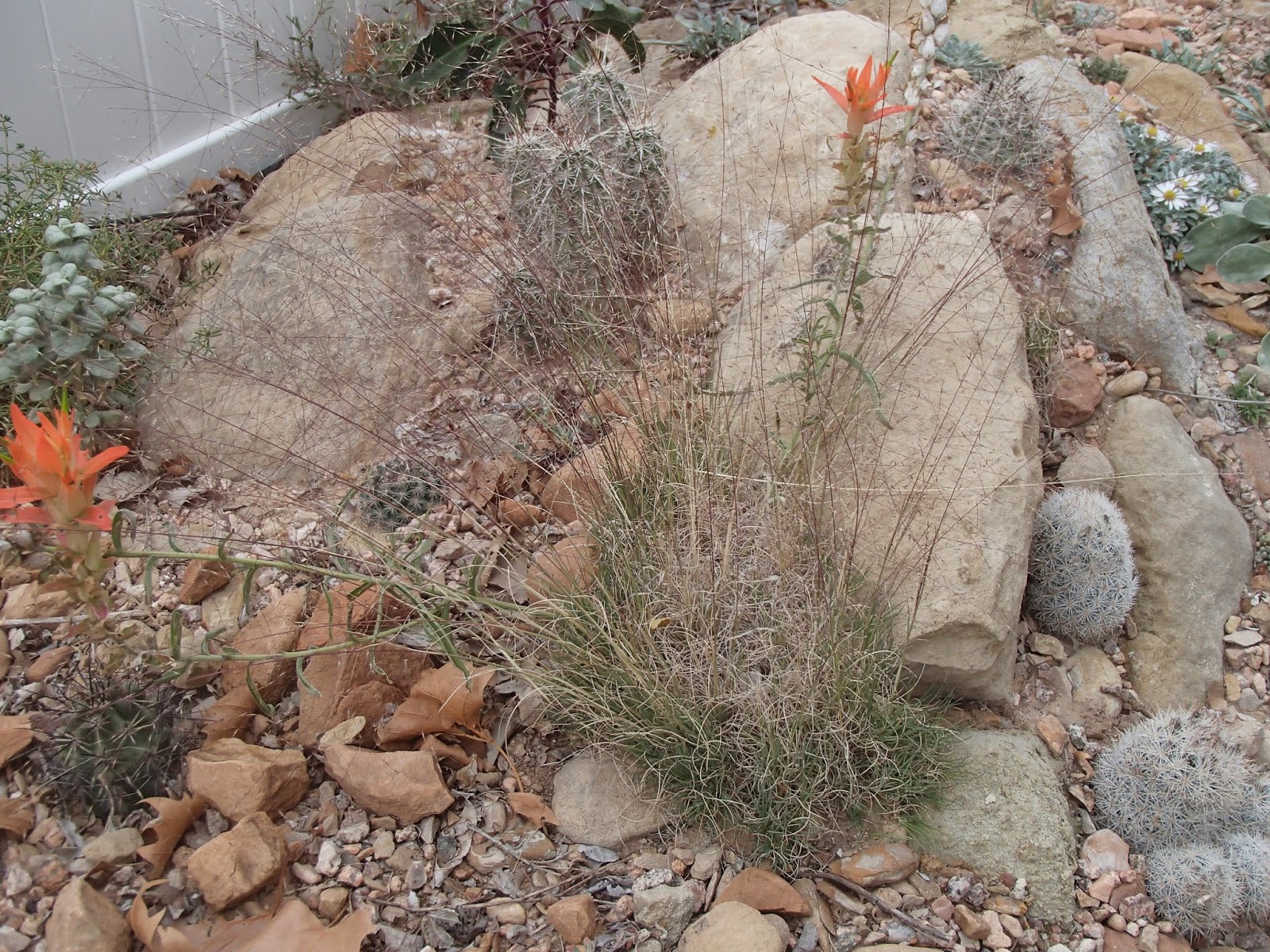 The old-school Czechs point out that it is one of the finest ways to making a naturalesque garden-outcropping look like nature.  Currently, I am trialing Muhlies, Fluffgrass (Erioneuron- it's a real thing) and others for garden-worthiness.  But this Halloween post is in honour (or horror) of one of the first plants in my first crevice garden which was removed, with great apology and ritual (and a little bit of cursing) recently. 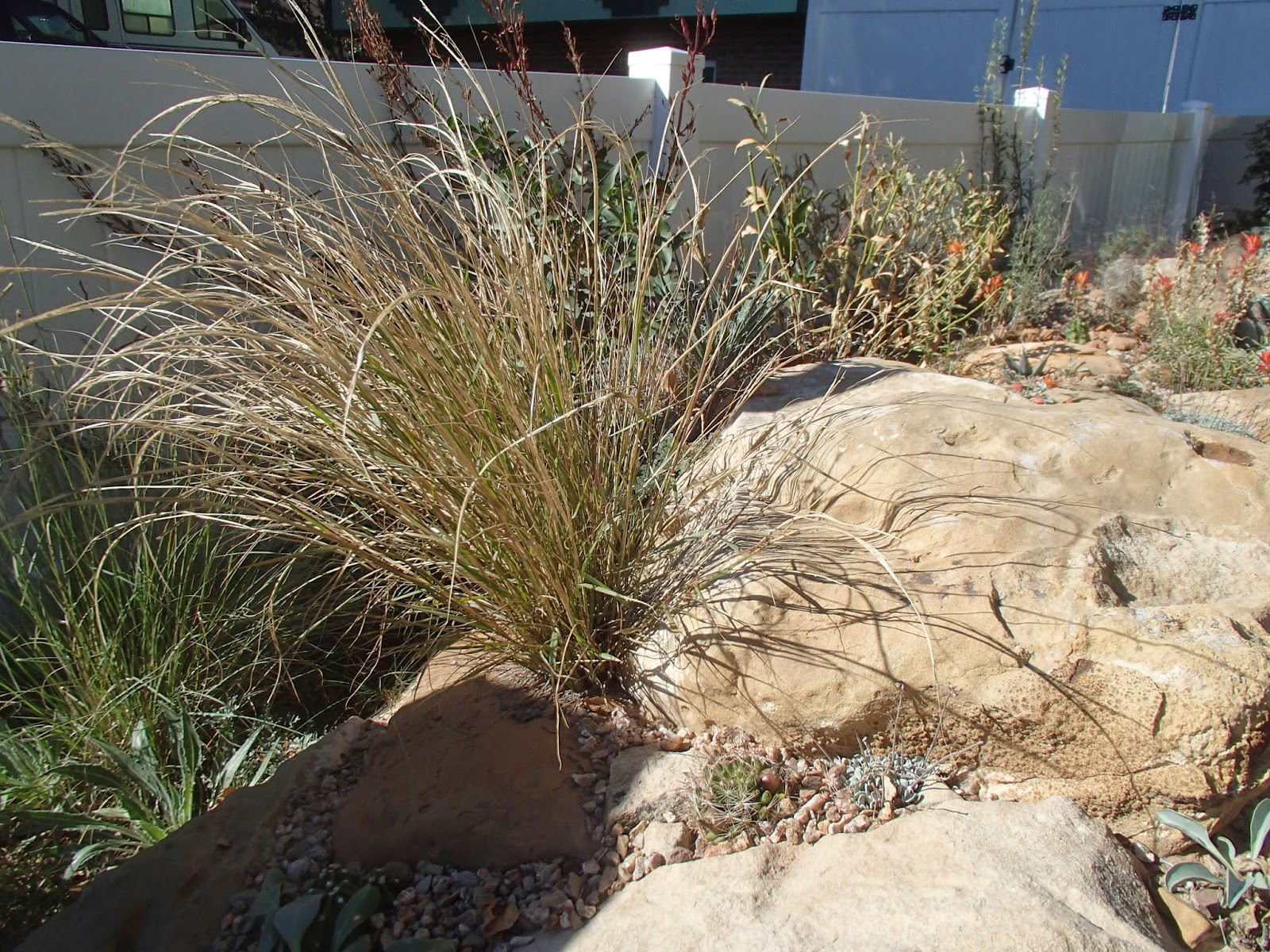 Sporobolus cryptandra, or Sand Dropseed, is an elegant and unmistakable plants who, like a custodian to the dirtiness of roadsides, seems to often be the first native perennial to colonise and resolve weedy verges, medians, parkways, and college-rental-houses around here.  I saw it rubbing shoulders with Kocia today all over town on a bike-ride, slowly and politely taking the land back from those tumbleweed hordes.

Sand Dropseed is incredibly xeric and of elegant lines, with a shining straw-blonde colour in winter.

It was the only plant to survive the initial planting of the hot South-face of my unwatered sandstone crevice garden, and even in dry years it is also an unforgivable, aggressive, effective, systemic, psychotic reseeder.  I kept finding its slightly-different green coloured blades among the buffalograss below, as well as sprouting in the middle of prized cushion plants.

And so, my old friend, whom I grew from seed collected from a littered, sunbaked knoll in Denver, whose off-centred suave parted-hairdo aesthetic I've grown to love, was axed (table-knived, actually) from the rock garden last week.

Sentimentally, the dried carcass of the plant was stuffed in a paper bag to dry and shed its fine seeds, which I'll fondly store in the fridge until I can find the right place for this great plant, which might just end up taking in a view of the neighbourhood from my apartment-house roof...

The APEX project, with paths, un-day 16

A small recent return to Denver brings a couple new developments to the APEX crevice garden.
1. It has a path ("Tan breeze" from Pioneer Sand to inquiring minds)
2. Some Sprinklers moved
3. Some places are too dry 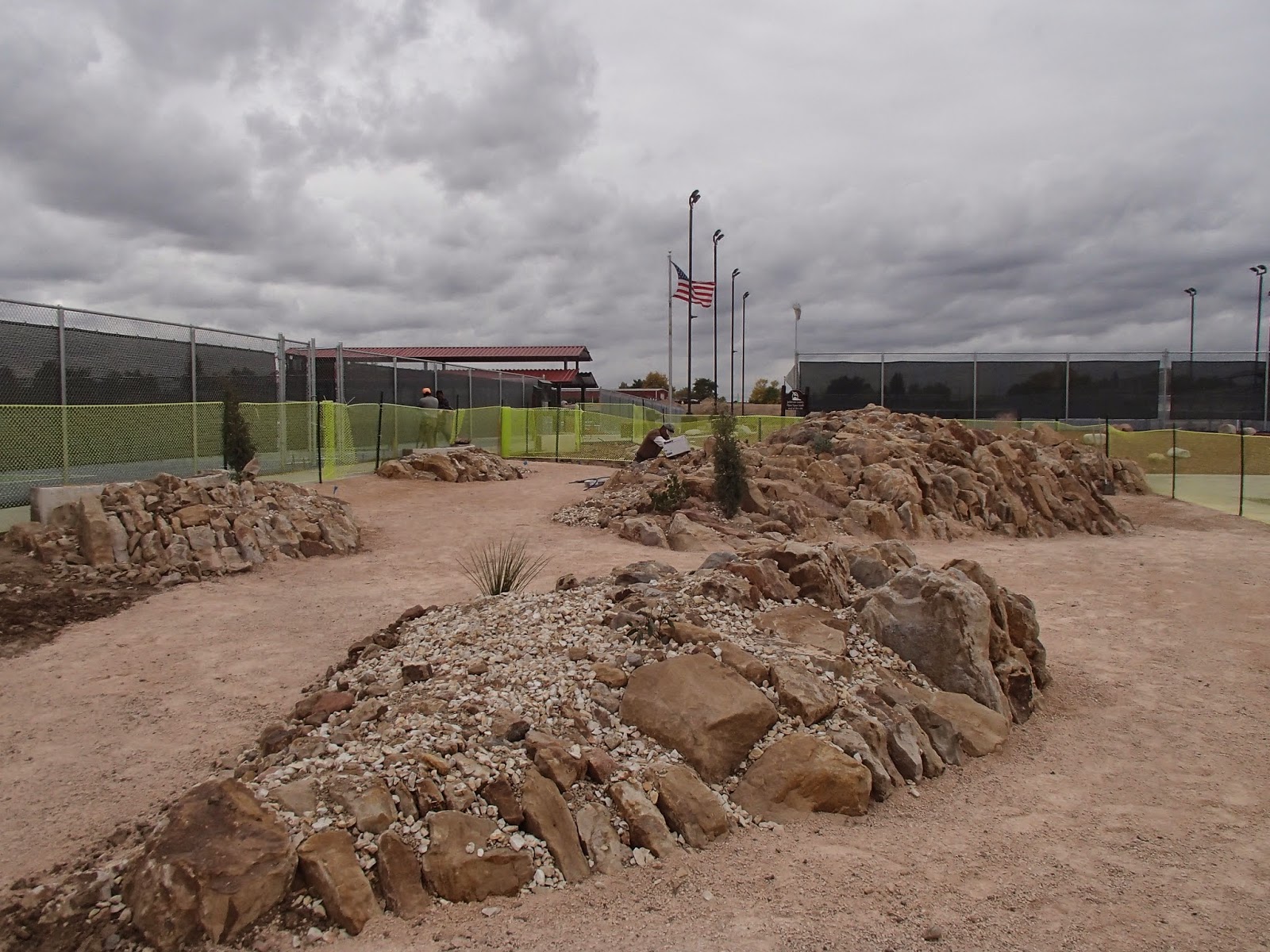 The idea behind keeping the stones, gravels, and path in the same brown family is for two reason: to unify the surface colour of the hardscapes and allow to show the form (shape) of the mounds, and to allow the highest colour-contrast to be on behalf of the plants.  Since 90% of the plants will be only a few inches  tall, they need all the help they can get in such a massive area.

2.  Originally, I was told that pop-up MP-rotator irrigation heads would be safe if they were both among the rocks in the beds and imbedded in the path.  The nice irrigation fellas (Singing Hills Landscaping, Aurora, CO) knew better and say that the heads will get detroyed if left at the path level and stepped on over time, so they took on the challenge of re-routing the path-heads and putting those in the stones.  As tight as we arranged the stones, I was dubious how well they could get those heads in there and did not envy the tedious work it'd take to dig under/through our stones.  But they were doing it. 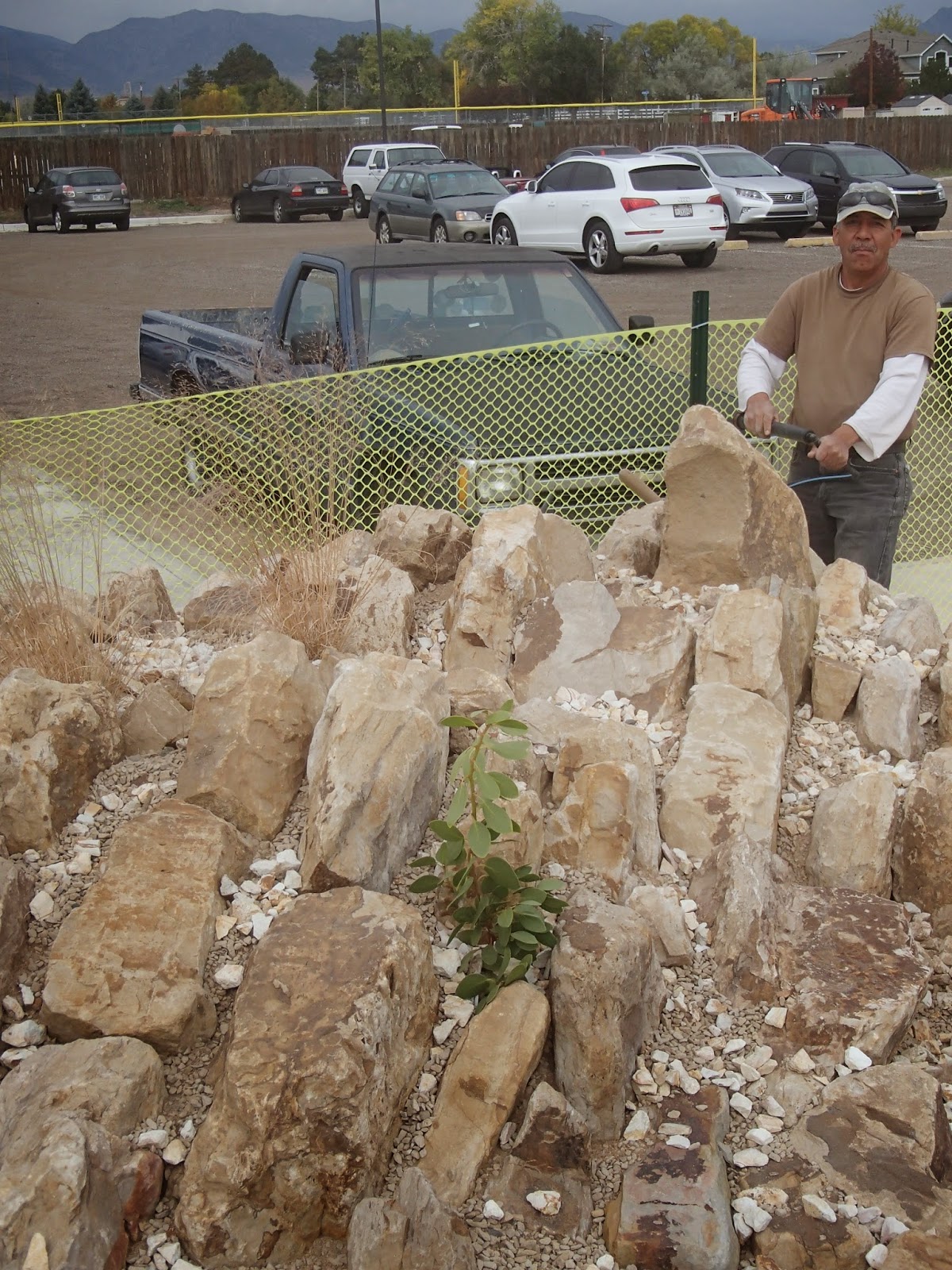 3.  Calling back to the reason that most gardeners in the dry west have not embraced sand as a growing media, some places in the garden became incredibly dry, even in not-too-hot autumn weather.  But I noticed that, unsuprisingly and not disastrously so, the south faces were drying out sooner (which is fine as well as welcome, we expected this microclimate fomation), but to a bad degree in places where the gravel was thin. 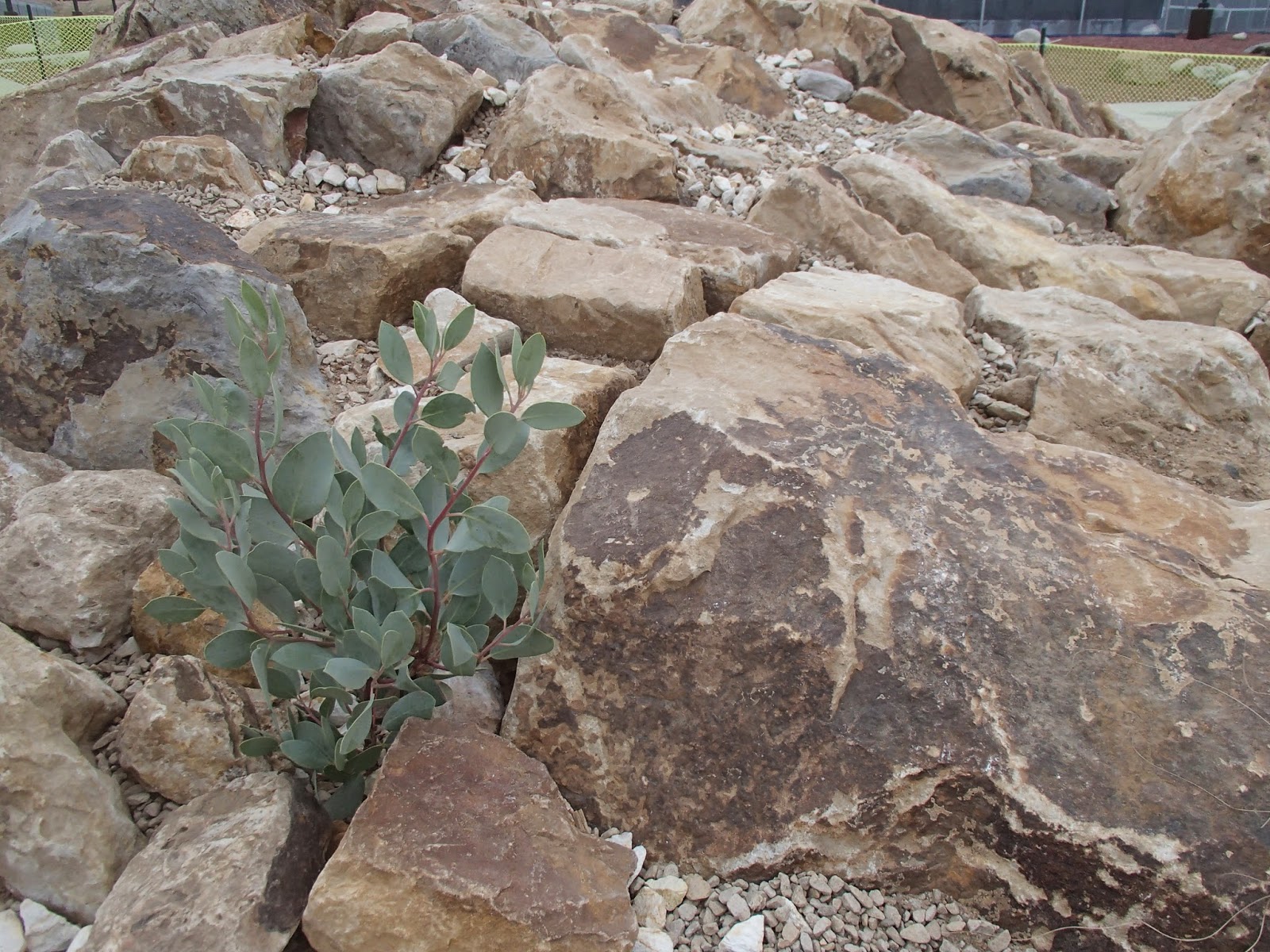 This is not  shocking, nor the end of the world.  The nice thing is, there is a flexible fix- a person can simply add more gravel to keep it moister longer.  So, in all, I fancy we will have to go back and carefully seek out and address those spots where the gravel setteld away  or were originally applied too thin. Gravel changes two things, which millimeter-for-millimeter, greatly impact the drying-out of soil:

1. Gravel absorbs the sun and does not transfer this heat down to the lower media as badly as open soil.
2. Gravel deflects the wind; protecting the sand from the drying movement of air. (like a wind-jacket or "slicker," as we westerners like to say)

Decreased air movement and decreased heat sounds like the opposite effect of a hairdryer, eh?

So, my worries are calmed by a fact others have long known:
Gravel is not a hairdryer.
Posted by Kenton J. Seth at 9:33 PM 4 comments: