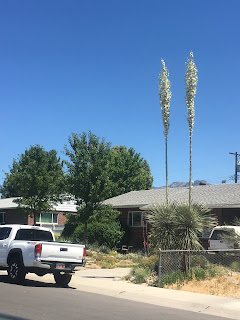 In one day last week, I had the unusual pleasure of experiencing what is among the tallest (hardy) Yuccas, and also the smallest. 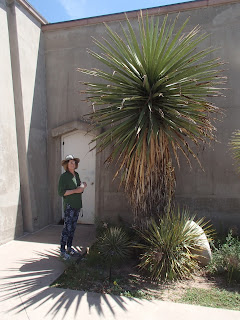 While Yucca faxoniana (above, one of my four favourite species, zone 5), rostrata, and thomsoniana, may all be capable of growing taller trunks, they are not as hardy and certainly don't boast the bloom stalk size of Yucca elata.  My timing was accidentally perfect to see it in bloom at my friend John Stireman's outside of Salt Lake City. 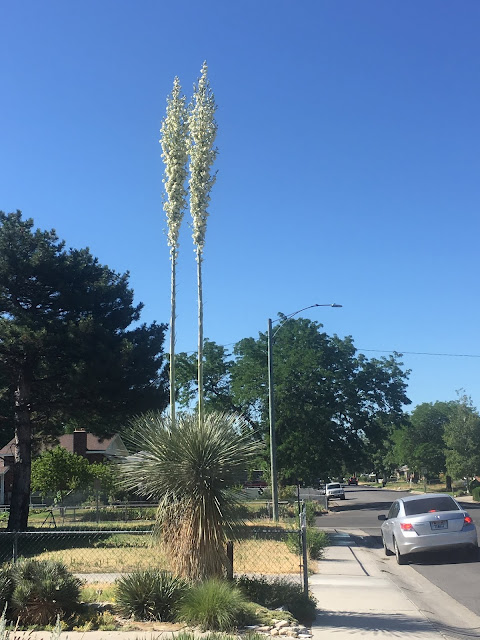 He measured the top of the stalk at 23 feet (exactly 7 m) with image software.  It has bloomed before but never quite so high.  I stalk this plant frequently and have never known one with such long, stiff, inflorescences.


Yucca elata (the "Soaptree") is from the Arizona and New Mexico vicinity, accustomed to mercurial and extreme southern plains weather.  It has a reputation for HATING transplanting when large, usually dying or at least dying to the ground and losing any trunk it has grown. Many guess that it has deep roots which do not branch out from where they are cut off.  In pots in the nursery, I find it a bit slow compared to most species. Don't let that stop you from planting it for posterity- these are mild challenges.  Just don't miss an opportunity to buy it or sow it when you can, leave it the hell alone in your garden,  and make an investment for the future.

Then I took off to South-Central Utah. 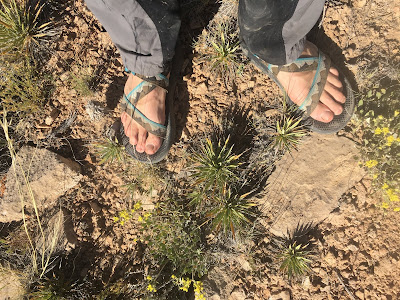 Here is where I write about something I had been long worried about and decided not to write about.

I try not to get political. But I spent some long nights researching, measuring dried flower bits, reading, and mapping this "Yucca nana" critter. The species is not a botanically accepted name, but it is widely used in horticulture.  After all that research, I must totally agree with science. My opinion as a not-real-botanist is that it is a horticulturally and aesthetically fun form, but according to the rules of botany and science, does not warrant new species status. Its dimensions fall within harrimaniae, and there are several non-isolated populations, most of whose edges intergrade into larger forms of Yucca harrimaniae- some of whom have 2-3' (up to 1m) leaves.  Not a clean distinction.  Don't get me wrong- I love it to death and I wish it could be named so. Maybe we ought to call it Yucca harrimaniae f. nana.  It still causes heartthrob in the chests of even the most jaded Western-American plantsmen, and is the cutest thing that can poke an eye out.

There, I wrote it.  Sorry friends.  I hope you'll still talk to me.

It seems like there is a rule that in landscaping, Yuccas must be planted close near sidewalks where, when they reach their completely unsurprising adult size, will jab passers-by. Then they get cut to the ground for this perceived transgression, but keep limping back from the roots.  Sad. 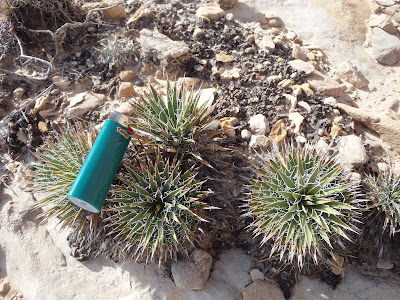 Yucca "nana" is the answer to our prayers- all the glamour without the size.
The perfect crevice garden Yucca.  It is rhizomatous. 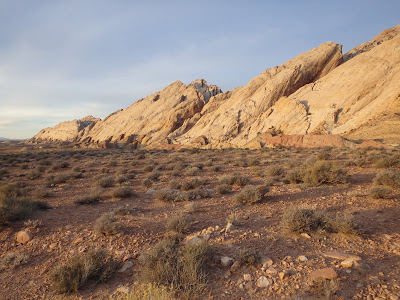 The smallest I've seen is a dwarf form further dwarfed in the crevices up on top of one of these crashed sandstone spaceships above. 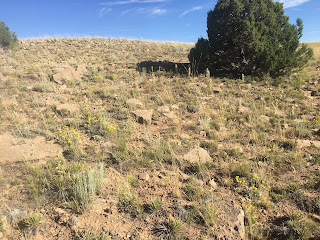 It grows in solid rock, rocky ground, and open soil. I've even seen it in clay and silt. Rocky places will dwarf it further.  Anecdotally, it seems to produce good seed in nature less often than other wild Yuccas around here.  And speaking of which, there is a fantastic recent interview from In Defense of Plants that blew me away about the sex lives of Yuccas with some truly surprising and amusing stuff. Do yourself a favor next time you've got 44 minutes driving, doing dishes or weeding. 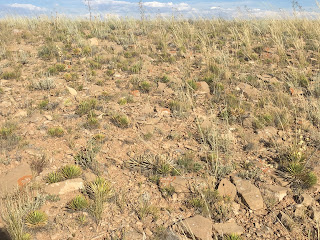 I keep thinking about sparse grasses in semi-desert steppe habitat. I think there is a breakthrough in Steppe gardens we are missing having to do with that.  See the little yucca in there?  There are limestone fragments under all that.  I love the traditionally uncomfortable mix of rock garden and meadow here. Grass and rocks. It makes the designers' mind ask "Is that Ok? Can I do that? Is that legal?  Will I get in trouble?" 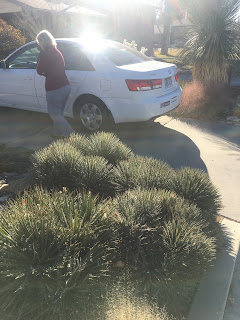 Incidentally, John grows Yucca nana, too. For him in his sandy soil, it is not so petite, and grows into a veritable knee-high hedge that looks like a pile of giant, clean, sea-urchins.  He cuts them to the ground occasionally, and they come back.

Size in Yuccas is strongly influenced by both genetics and environment.

Let's not under-appreciate the stalwart year-round presence and humble surprises that Yucca brings us.
Posted by Kenton J. Seth at 12:16 PM 2 comments: