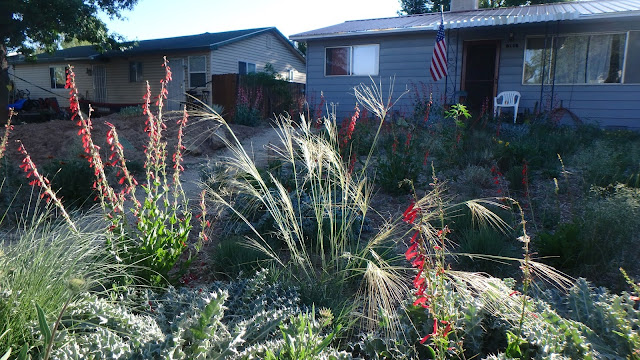 (Penstemon eatonii, Hesperostipa comata, and the wrong kind of thistles.)
Now, why get sucked into meadows?

Wild grassy expanses have long sung a siren’s song to me, perhaps for reasons brought up in the Steppe book having to do with humanity’s pre- and post- agriculture relationship with the steppe biome. It has called to me like a silent, logical truth, too, for years when I have experimented with irrigation-free native plantings: I found that so many patches of earth seem unstable, drawn away from what I tried to plant, until they are clothed in the resplendent robes of grasses and forbs. I’d plant yuccas and xeric ground-covers, but thick galleta grass would take over, rich as a wheat field. Weeds in the gravel would tell me that “there is room here yet- these plants are not enough.” 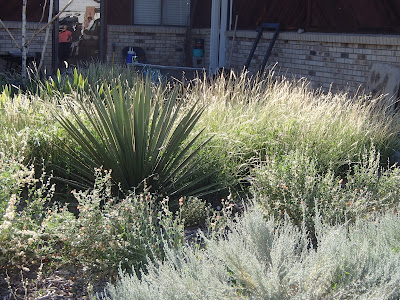 I spent a few winters on research-benders to find out a few amazing things. One, that there is such a thing as a desert grassland, one book having the most enlightening pages about them, and two, that my hometown, with its break in oral history between the original locals and the new ones that suddenly replaced them, is nestled in a dusty valley that was early desertified, almost certainly by overgrazing.

Why would tall grasses want to dominate front yards in my desert hometown? Turns out that the desert grassland ecology teeters on the edge of being possible- Ours was established by a bygone climate and is largely not able to be restored because the climate is too dry now, and has become even dryer in the last lifetime. But in a front yard, we can totally bring it back because it sits on a forgotten foundation of nutritious soil from years of lawn, agriculture, or irrigation. 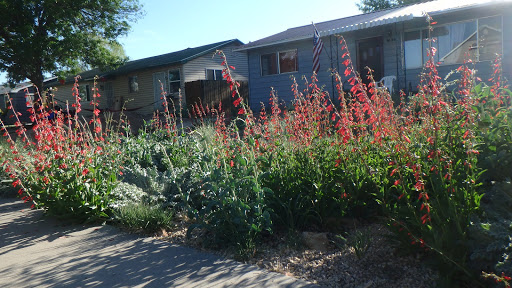 I realized that if I wanted to plant something that would last the longest, be the most resilient and permanent, it had to honor the soil and climate that was there. And honor it closely, or it would always try to change on its own.

Now, they’ve been doing meadows in Europe for a long time. Having trashed most of their pristine nature literally thousands of years ago, and the machissimo high of domination having worn off,  they crave to bring nature back into their cities.  Americans are getting on board, too- John Greenlee wrote one of the most influential books I’ve read on it.

Very recently, James Hitchmough has been testing not only starting entire large, expansive, perennial gardens from seed, but also public/human response to them. Now that’s a scientific way to ensure people like your gardens! He’s truly bridging the most-feasible with the most-ecological. He’s got a special planting system that is working super well in the UK, and a few other places.

Now, I, like most Colorado gardeners, are weary of any foreign planting advice because it usually doesn’t work. But I had accidentally discovered in some of my own plant projects that there is the possibility of a Coloradoan twist to this seeded meadow thing: 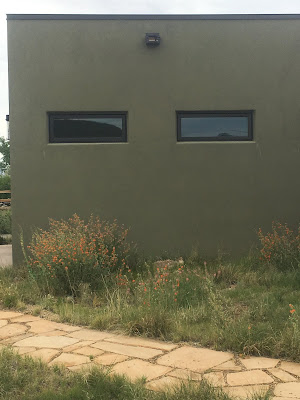 As an accident of a project in 2017, I used a few dumptrucks worth of clean, screened dirt to overdress the whole area before I seeded it with dog-friendly dry natives.  Turned out that was what Hitchmough would call a “sowing mulch” and it really works.

And then it all sunk back, with less attention, to the murky depths of my mind.

Until we bought our place, and just goofing around, I threw out several bags of old seed from old reveg projects. 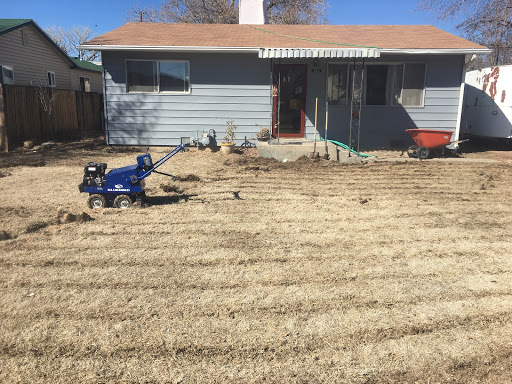 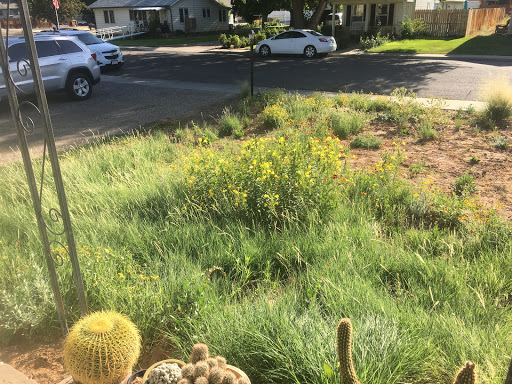 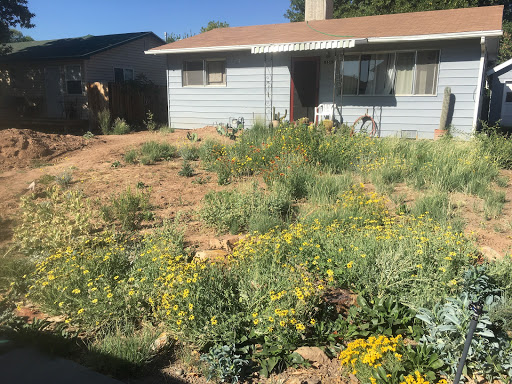 And without water for two years, it did this: 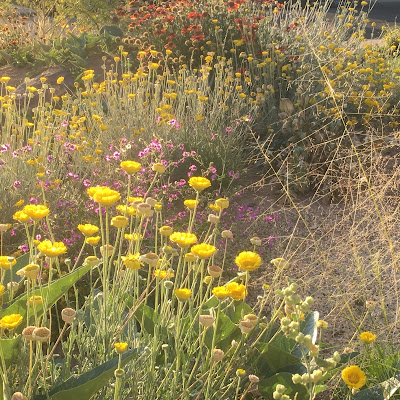 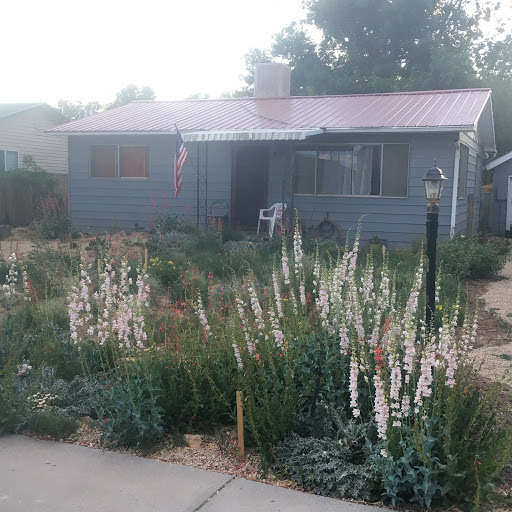 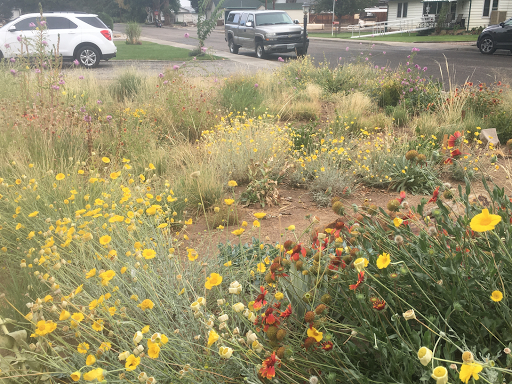 You may say “There is a hitch. There is a trick, there must be a catch- because Fruita, Colorado only gets nine inches (230mm) of natural annual precipitation.” And you may be right- I’ve stared down into the bottoms of deep holes dug for nearby power lines, lamp-posts, and basements to see standing water about 6-8 feet (2-3m) down. Healthy trees growing without irrigation on occasional vacant lots are also testament to groundwater. So yes, I think there is some available to even surface plants.  Still, I am impressed when they bloomed right through a record hot summer. And I must know where the limits are.

Can it be made to work, reliably?

Instead of this idea remaining a back-burnered fascination I’d dabble in from time to time, it lurched forward full-throttle. Several friends and clients, having seen our front  yard, asked me to try the same at their places this fall, and then I was overjoyed to find that the CSU Hort agent for Douglas County, John Murgel, is creating trial plots to investigate the feasibility of adapting the Hitchmough planting system to Colorado, to be left unirrigated, to boot. John reached out to me because he found I was the only one around crazy enough to be sinking so much time into testing this stuff out. So we’re comparing notes and he’s patiently teaching me spreadsheets as we bravely march into uncharted meadows.

But at this point, we are three: our friend Kevin Williams, Horticulture Specialist, at Denver Botanic Gardens was probably the first forerunner in Colorado to precisely execute this sowing system three years ago along Josephine St, exposing the most critical adaptations that will be essential to make seeded meadows a thing in Colorado. 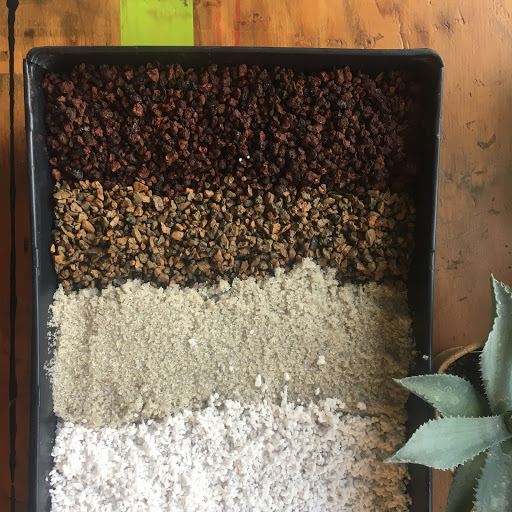 Now, I’m not withholding latest discoveries in the best way to do these things- I’m choosing to not give unripened advice yet because these adapted techniques are still new and I’ll remain dubious of them until they truly prove themselves. But don’t worry, we’re working on it.

Why is this so damn exciting?

Let’s face it, people don’t do stuff until it’s the easiest thing to do. Many studies and research projects

have shown that meadows beat lawns hands down, but successfully pressuring landowners and contractors to bother themselves to learn a new skill to build and maintain a meadow is only possible when the savings are staggering enough. You know it. Humans can be real sticks in the mud and cling to regression like a wart to a lip.

It is so early in the test phases that at least locally, I can only report my own back-of-napkin math:

An experimental plot I just did for a friend was $2.51/square foot. The average fancy xeriscape I did as a landscaper years ago ran about $4.50/square foot.  And I hardly made a living back then…

The Xerces Society reports that out East, a seeded meadow is 2/3 the cost to install, and less than a seventh of the maintenance cost, compared to turf: Meadows versus Lawns

If we can find a way to pull this off, this could save open-minded homeowners- not to mention city municipalities and corporate landscaping- tons of money.  As a byproduct, which is of course what drives us biophiliacs: it’ll increase biodiversity, feed insects (and as a result, birds and other wildlife), reduce fossil fuels, and increase general goddamn beauty in these parts.

This could mean that there is an immediate monetary incentive to rip out large expanses of turf, especially in HOAs, road verges and municipal medians, and replace them with flower-filled crowd-pleasing bug buffets. There are real reasons that this hasn’t been done already, and this new planting system will weaken those reasons. Now that’s why I’m more than a little excited for it.

I think it’s what the dirt wants. 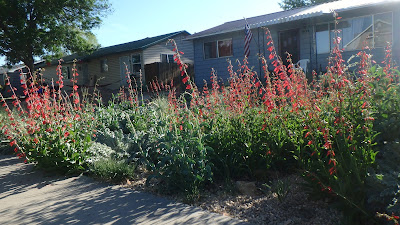