I hate cheesy puns in titles, and alliteration.  The tides of trend are strong.

Announcing a small outbreak of Crevice Gardens in Denver.  I think Mike Kintgen said he's put in five at Denver botanic Gardens to date (not just this year). It's a better way of growing plants. 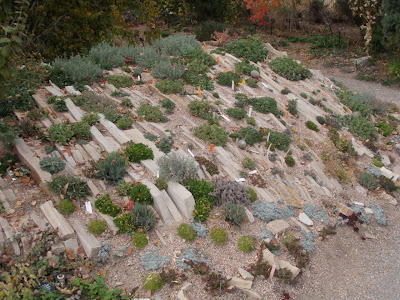 (The Big Crevice Garden at the Entry to Denver Botanic's Rock Alpine Garden, in its second season, thriving. It makes a pretty solid arguement for Crevice Gardens. 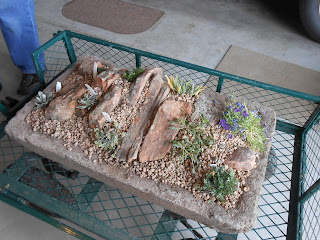 (Crevice Trough by Mike Kintgen for Anita Cox)
A crevice trough is excellent for those who aren't ready to commit to a full one or have the space- I have several of these and the crevice environment benefits are the same as a "life size" one. 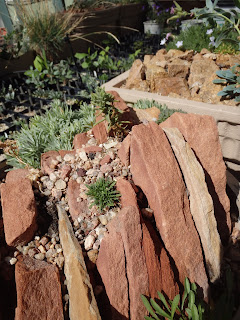 So far, it's the only way I've succeeded with plants like the Stemless Beardtongue (Penstemon acaulis) and the Rimrock Paintbrush (Castilleja scabrida).  {This one has clay in the crevices}

I wanted to celebrate three which happened this spring, and make a nod to my friends who let me build them for them.  What they do with plants will be the real show and the great glory in future.  Each  one is so different and very individual: styles are extrapolated from personal preference, site, and existing garden/home.  Such parameters make building one possible.

Linda's vertical red sandstone garden:
She sought something highly dramatic that fits her style of house and garden.  Those highest and most vertical crevices will be harder to plant and maintain, (My go-to is small Sempervivums as pioneers) but they will be quite a statement. 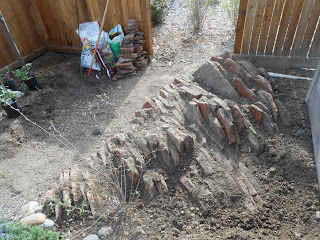 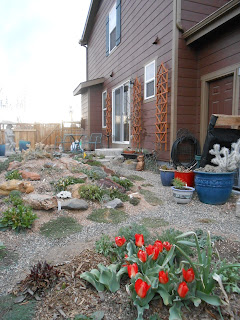 Her garden is bright, bold, and playful.  It takes one a while to realise how small it is.  I hope the crevice garden does it justice. 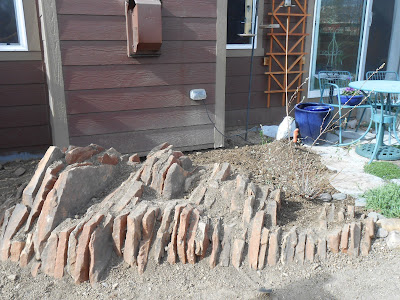 Brand-spanking new, still covered in dust.  I can't wait to see how Linda has planted it. 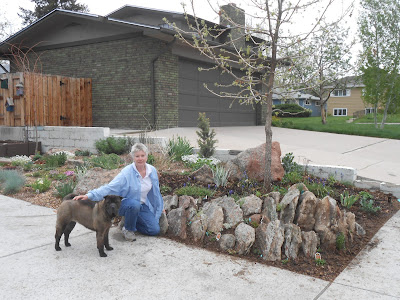 The elegant Anita Cox (and estate supervisor Maggie) in front of her South-African Inspired Crevice-Garden.  She shared with me pictures from a trip she took to South Africa to inform the design.  Some of those stones were a beast to wedge and support into place, but deep and spacious crevices allow for shady, wind-protected spots.  It should be great for true alpines.

Weighing in as the largest was Lee Ann Huntington's Rockery.  I particularly like how the rocks jump the path, or does the path bisect the outcrop, like a mini roadcut? 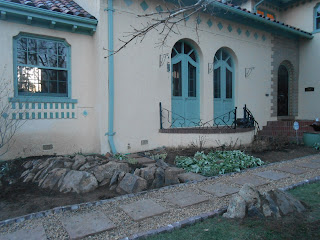 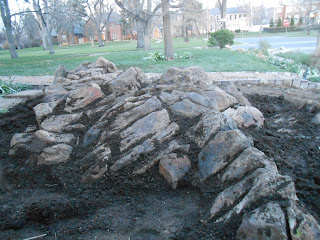 Just finished, mid spring.  I wish this were my Mesic rockery. Note the regular stratificaiton interrupted by the terminal face of the feature, a Czech Crevice Garden rule. 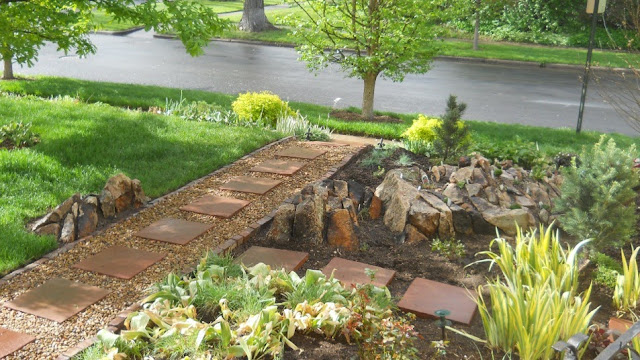 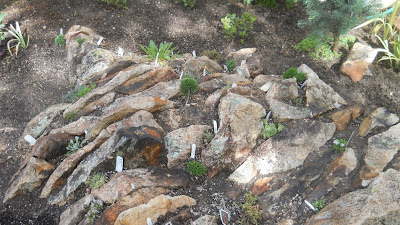 She's aleady got a fine collection tucked into those hospitable places.  I'm finding that the tighter the spot, the closer to the meeting point of two rocks, the better the plants. Nice work, Lee Ann.

Each gardener was honoured to host a garden tour this spring, the first two by the  Rock Garden Club and the last by the Park Hill Garden Walk: so hopefully, tour-goers were introduced to the wonky and wonderful style of Crevice Gardens with these nacent ones.

One for the Bugs

This is one for the bugs.  A most springs has been good for insects, too.  In the past twoo weeks, bugs abound.A post to honour them.
Warning: Photos contain many shots of my unclothed left hand. This is for size. 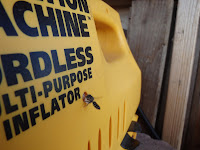 A Mason Bee, (Osmia sp.)  tries very hard against slippery plastic to stuff "bedding" for its progeny in a screw-shaft.  Hey, it's easier than drilling your own hole. 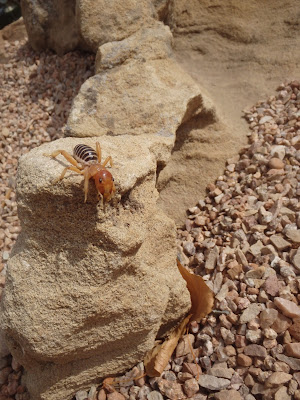 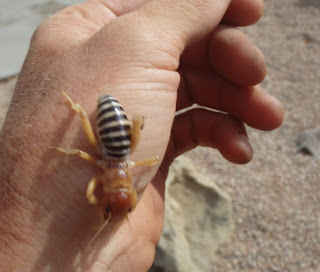 Bugs get big in the Desert. 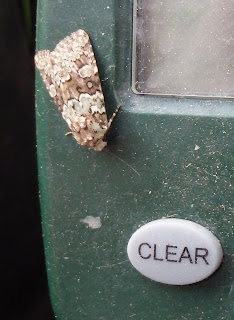 A moth- note its very subtle forest-green flecking between the brown, the same hue as the plastic irrigaiton timer in my nursery. 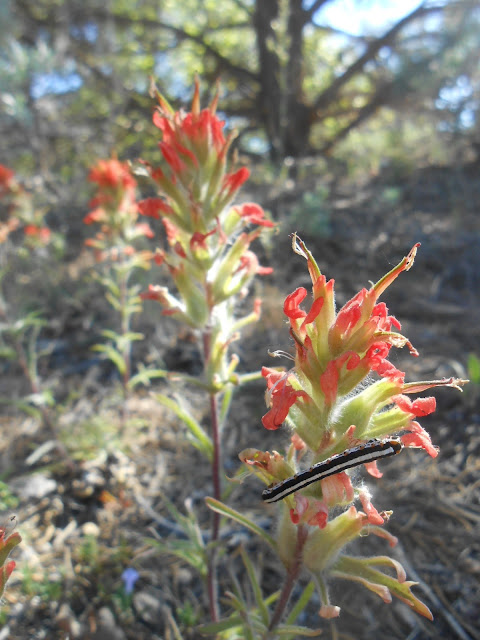 Larvae of what must become a butterfly, chowing down on Paintbrush:  Castilleja chromosa, on the Uncompahgre plateau. 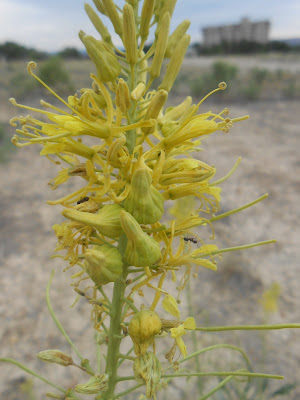 Four "bugs" on one flower stalk.  Of the Mustard Dynasty, reigning over the June desert after a good rain, Prine's Plume (Stanley pinnata ) hosted ants who were harvesting nectar from the flowers. (A parastic wasp just crashed into my coffeecup as I write this, and flew away)  I moved in to Poke at a Flower-Spider, clad in the same yellow as the flower and totally invisable.  But note how some buds did not open, but are swelling obesely.  These are a "gall," enclosing a small white grub, who squirmed, annoyed, in the sun when I cut open one of the parastitised buds. 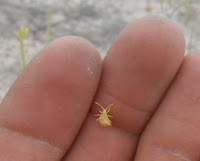 \
And at the very same time, a true bug (Hemiptera- always have a triangle between their shoulders and include squahbugs, stinkbugs, leafbugs, and box-elder-bugs...) crawled onto my hand wearing that same lemon yellow camouflage.  I wonder if its assymetry is intentional or a defect. 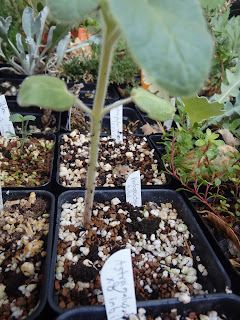 Word of the day:  Glandular.
Here, the sticky, glandular-haired stems of the annual desert Unicorn plant/Devil's Claw/Double Claw  (Proboscidea parviflora) in my nursery attracts and kill gnats, whose carcasses remain on the sticky-hairy stems. 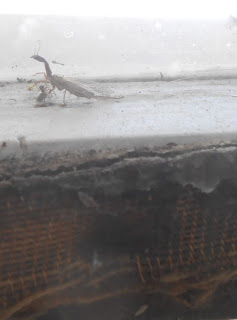 
Other creatures have made an appearance inside my apartment in larger number- one day: common house flies.  One week: tiny golfball-shaped-boxy-ruddy-beetles with antlers.  There were some in my seed storage box.  Oh dear.  Seeking specifically seeds big enough for them to be emerging from, I failed to find the seed they were attacted to, or more likely, hatching out of. The adults probably lay eggs inside of the flower- the larvae growing up in the ovary simultaneously with the maturing seed, feeding on it, and enjoying the luxury of the hard seedcoat growing around them.  So, instead of morning glories germanting, there are beetles hatching.  Brilliant and beautiful parastism. 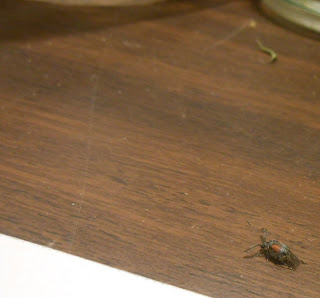 I did not figure out which seed produced them until trying to fall asleep one night, I tracked the sound of their scrambling around in my seed envelopes. 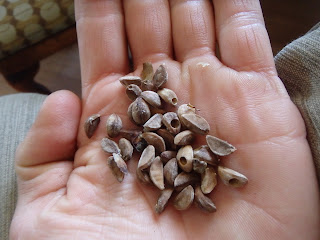 The "Red Megacerus," weighing in to the mega size of a dried pea: Megacerus discoidus (ID courtesy of Trina with help from the folks at BugGuide.net)  "Cerus" from "Keros" means horn, in greek, by the way.  "Mega" means big.  Maybe.

At once, I felt helplessly guilty for accidentally allowing some of these Southeast Colorado creatures escape on the Western Slope- until their description notes that they are also parasites to Convuluvulus arvensis- AKA Bindweed!

Godspeed to you, Megacerus!
Posted by Kenton J. Seth at 3:24 PM No comments: 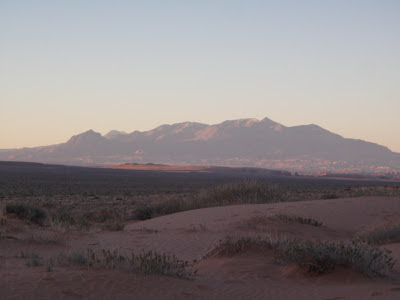 An update to July's plant-nerd botany-related "public service."  The top aim of my blog is to contribute things which are not on the net already.

With the publication of the 2a volume, which completes the 8-volume set, (including the much-anticipated section on Buckwheats!)  here's the complete index to all the plant families of all the plants that grow in the Great Basin of North America.  I take this opportunity to thank the botanical authors and illustrators who worked who-knows-how-many years (decades?) on these literally several-thousand pages full of descriptions of physiology and location of the intermountain plants.  It's a staggering achievement.  Thank you.

How many people in any discipline could have such dedication?