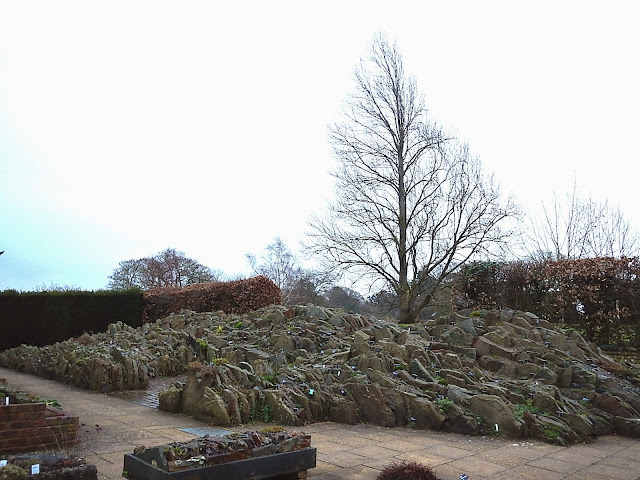 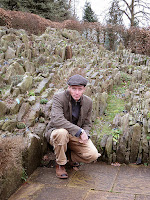 (photo of me, for proportion, courtesy of Paul Cumbleton)

In January, I visited one of the largest crevice gardens in the world, one of the most important, and famous.

The RHS (Royal Horticultural Society) Wisley is not far outside of London, pretty close to Heathrow International Airport. 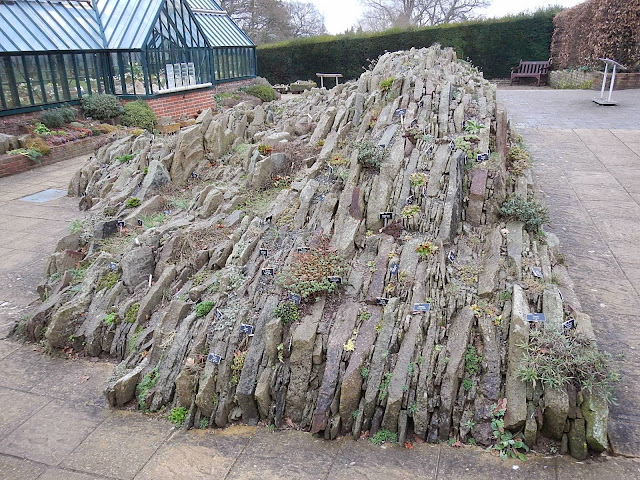 The crevice garden, built by RHS staff (headed by the kind Paul Cumbleton at the time) and led by Zdeněk Zvolánek, was executed in 2010.  It is based on sand, which is entirely invisible.
For nitty-gritty details, see the diary of its construction. 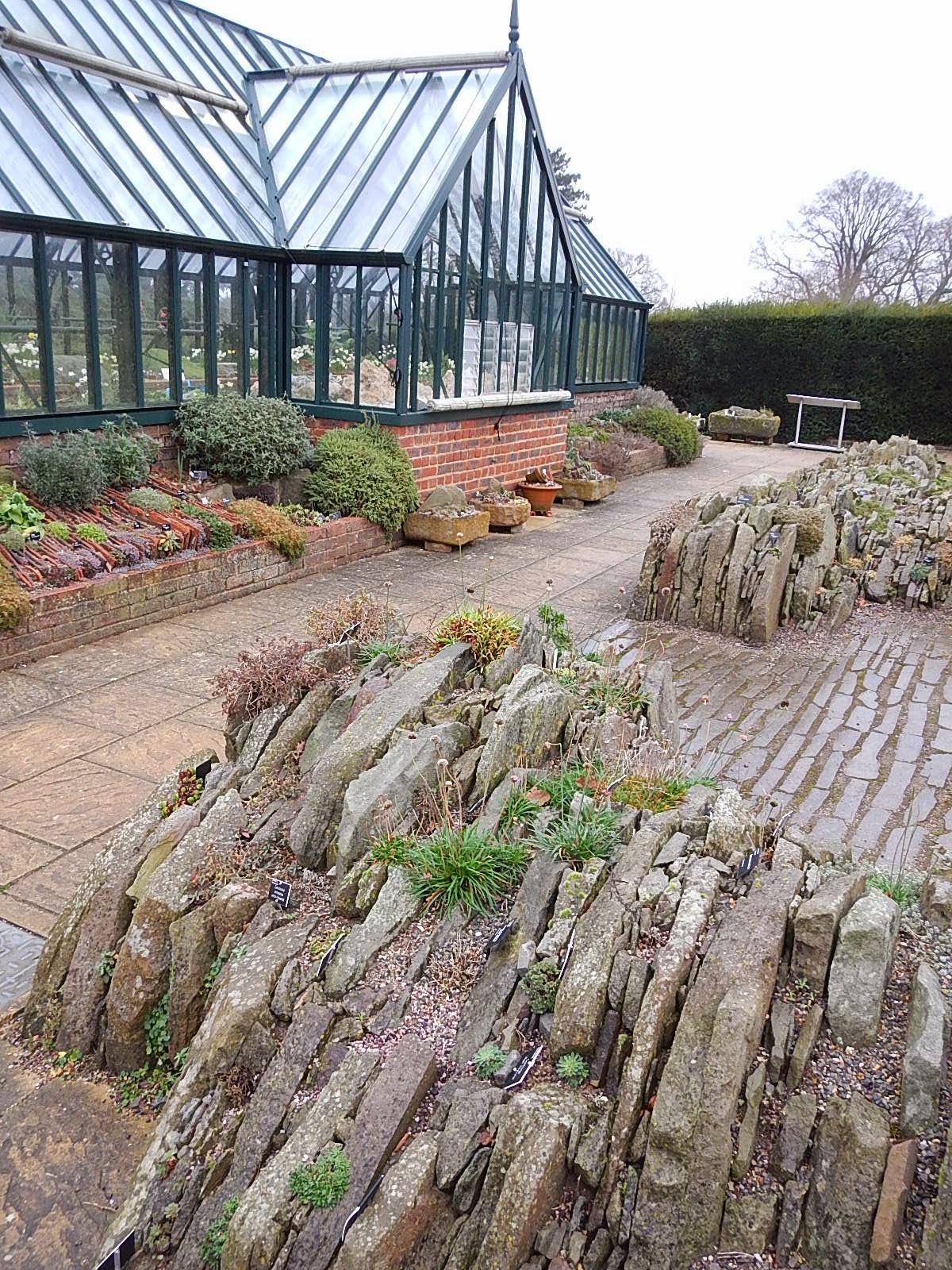 Pictures I had seen of the garden didn't move me much, but perhaps that is the artist blood in me, because visiting it was different.  To be in the same space as this installation is truly, unequivocally impossible to convey in a picture.   Standing next to it was dizzying.  Know that pictures will never serve, that this is a fine art peice that one must be near to experience.  Would you judge Old Faithful by it's mugshot?

The sense of space is staggering.  It is very much a small mountain-range enclosed by hedges and within the auspices of an alpine house.  It's a pet mountain range, if you will.  The dramatic verticality of the stone is so catching, no passerby, no matter how disconnected from nature nor the physical world, could walk by without being taken aback. 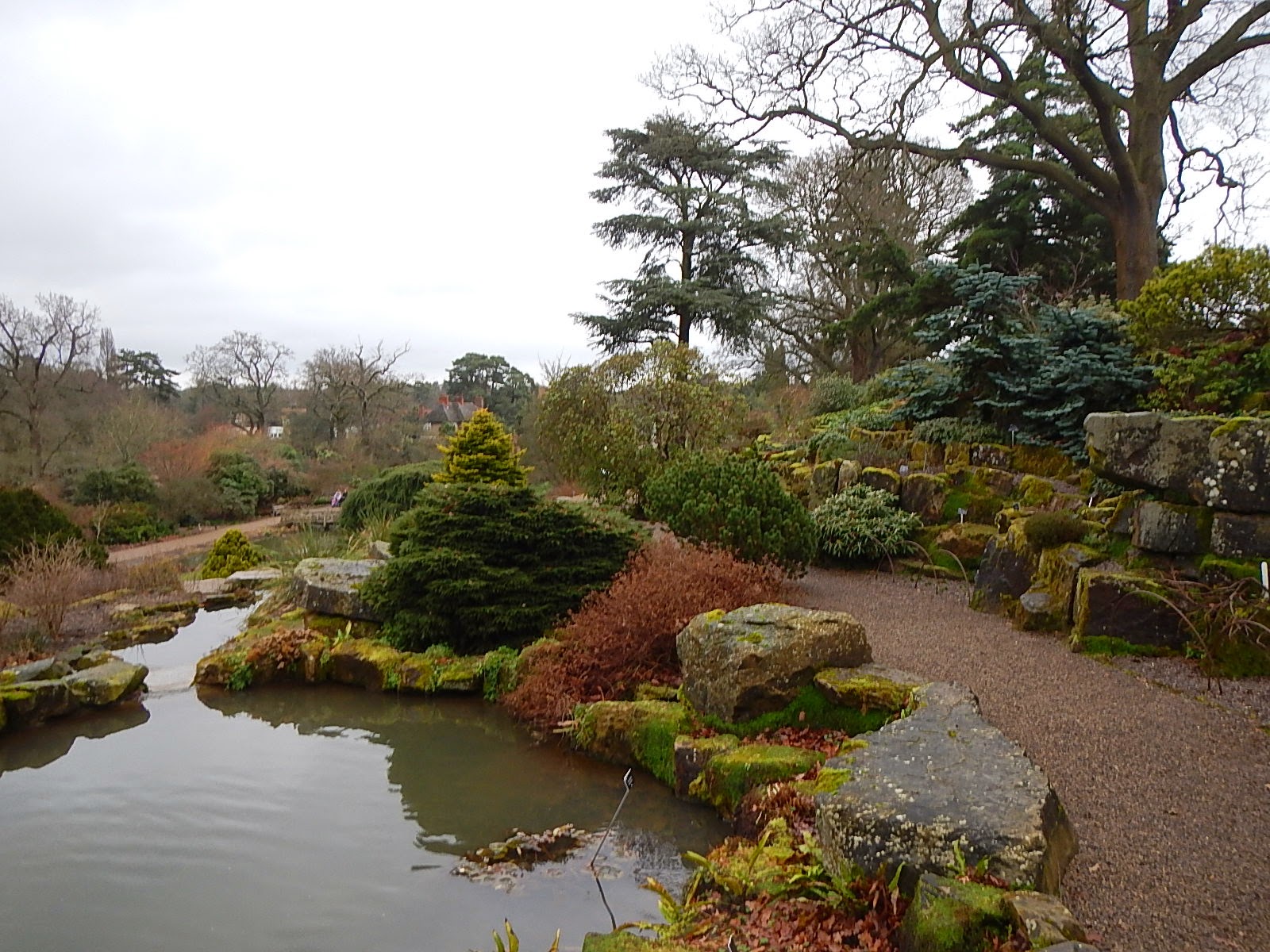 The rest of Wisley is a special treat; a jewel in the crown, not to be ignored. Even in January. 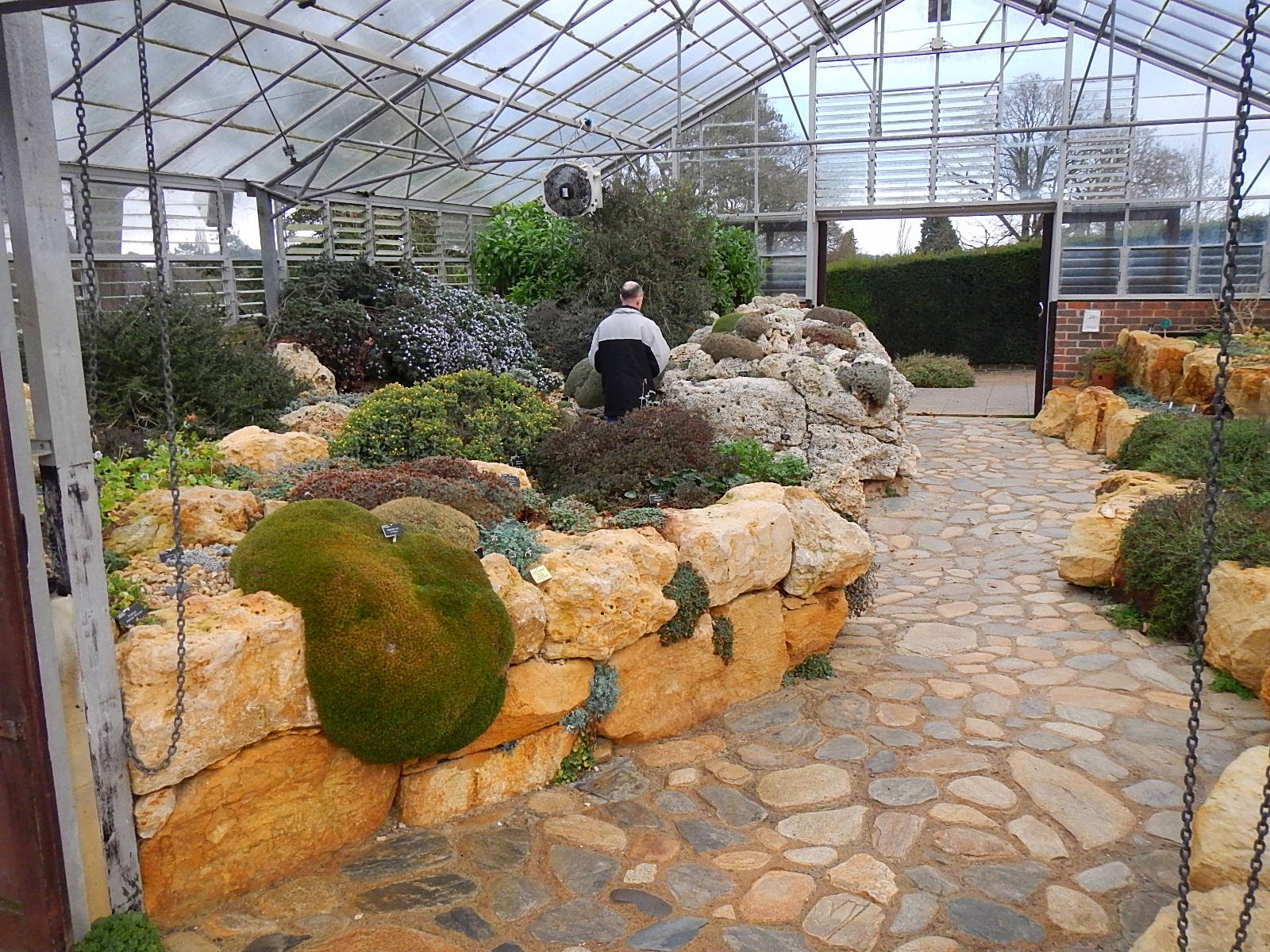 The Alpine houses are institutions to themselves, requiring the toil of a fine staff to maintain a stock of plants outside of the exhibit which outweighs what is publicly seen at any given time.  It is so important to honour the appreciation of the relationship between gardeners (or caretakers, curators.) and the exhibit (plants, collections).  This is not immediately obvious to non-gardeners, but plant lovers are the heart and soul of such places.  They know the balance between nerdy botanical curiosity and general appeal, because the not only deal with the public who patently remind them of this truth every day, but live with this balance in themselves.  The truth is that both are critical.  Both are essential.  A stunning masse of fiery orange annuals  may be a hook which lures a human to a deeper love-affair with plants, but there must also be a substance and a culture of sophistication for the world of horticulture in an exhibit somewhere else.  Wisley's Alpine Department is one of those places, and their front-line exhibit is still stunning even if it is not a sugary bed of bright daisies.

There is a trend wold-wide in botanical gardens for sex-appeal, shock-and-awe, and bottom-line-worshipping marketing-efficacy fever.  As a business owner, I am deeply and profoundly aware of the importance of the bottom line (since it is directly tied to being able to eat or not!), however, the culture of "public impression," "public face," "public perception," and image,  driven by a campagn to make better numbers (visitors, income, etc) is starting to dominate like white blood cells attacking their own body.

The quality, the work, the legacy, of botanical institutions everywhere, is suffering.
All this marketing, business-headed priorities, perhaps fueled by the birth of the information age, is a fertile environment for performance-based and purpose-forgetting corporate style.  Worst yet, it sustains itself and progresses forward, since it feasts on numbers and is mathematically justifiable.  But that does not make it right.

Botanical sophistication is being censored.
Perhaps Mark Twain's quote on censorship will serve:
"Censorship is telling a man he can't have a steak just because a baby can't chew it.'

Shall Botanic Gardens stop planting Lewisia because most visitors don't know what one is?
Many are. 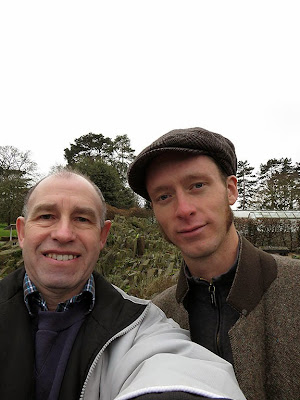 Britain's botanical institutions have a longer and deeper history of honouring "collections" (or, the variety and documentation of all the plants they grow and show) than other gardens around the world, whose main goal is an attractive public space which uses plants as the material to get it done.  This balance must be reckoned.

My greatest thanks to Mr. Paul Cumbleton, who is the retired ex Alpine Head at Wisley.  He took the time out of his day to shoehorn me into the garden in my limited time in London.   I regret having so little time to spend with this humble yet deeply effective man. 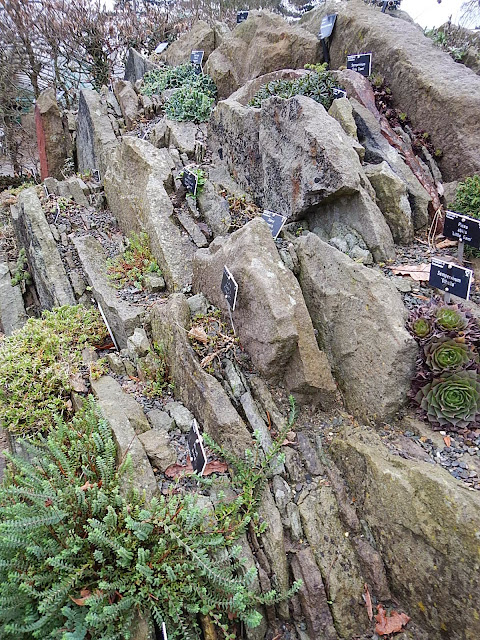 An institution which prioritises education and "collections" has plant signs...

A study of the plants in it betray that all sorts of fine things are happier there which were not possible in other areas, and that a small set of plants are not happy, including a fir or two, as I recall, perhaps because they want rich, humusy soils and cannot get their nutrients from the minerals in sand.  But look at the rest that do!

And even the Royal  Wisley had not even been able to fill every crack, every nook and cranny! 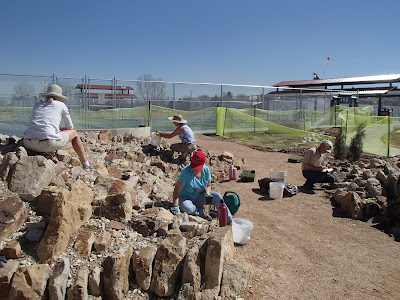 My calculations showed we'd need about 1000 plants for them to even be visible in the garden. It's a big space, so I budgeted for that. Donated plants brought the total aim to 1200 plants.  Soon, I'll have a final count.

The big news was the help.  Just about the time I should have been panicking about being able to get all those plants in the ground, friends came out of the woodwork (and even faraway places) to plant.  Having been quite occupied with the logistics of acquiring such a large number of exotic plants from all over the place, they totally saved the day. Truly, it would have been a disaster without their deus-ex-machina efforts. 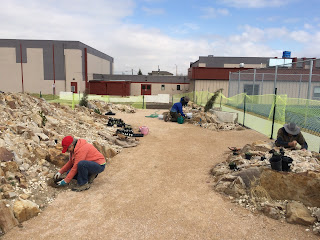 Margie Frey, left, former horticulturist/head gardener of the Western Colorado Botanic (where she did a heck of a job making more improvements with plants than anyone had in recent memory, in my opinion) came to plant. 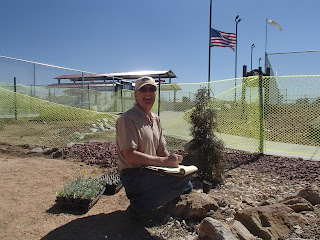 Creating the system for recording where everything was planted was Kevin Pykkonen, of Boulder, who has been present and involved with every part of this thing.  His keen passion for the fanciest plants made him a specialist at figuring a few things out. 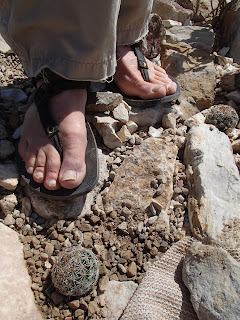 Gordon and Stephanie surprised me by coming all the way from Colorado Springs. They bravely faced the most barrel-cactus intensive bed.  Gordon did it with sandals. 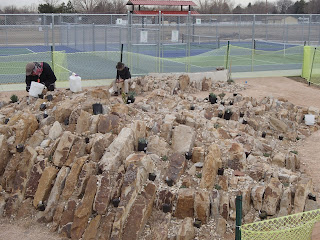 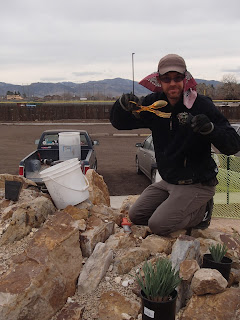 Van will now demonstrate the right way to plant a cactus.  With salad tongs. A trick courtesy of the Chinle Cactus Club in Grand Junction, Colorado.
He'll even translate into Japanese. 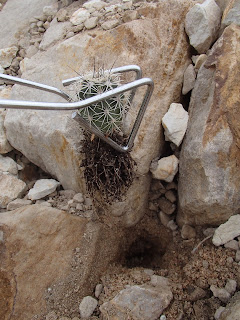 The right depth can be maintained with the tongs while one backfills the hole with the other hand Yep, we even bare-rooted the cacti. 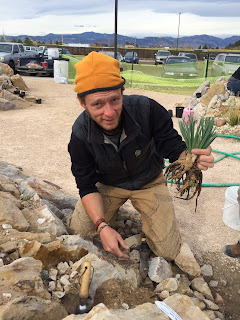 Proof I actually did some planting myself,
photo by Van Milton 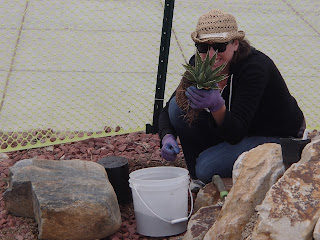 Marla of Roots Medicine Gardens, threatening to show us what a little agave medicine is like.
Marla is responsible for compiling the database of plants which will one day be online for public access. 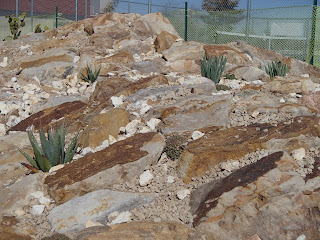 I really do like the way radially-arranged Agaves look in the matrix of a crevice. 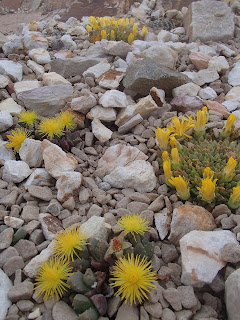 Stomatium sp, from the soon-to-be-closed Timberline Gardens opens in the late afternoon, just as the nearby 'Gold Nugget Delosperma basuticum is closing.  It's a fun handoff.  There are varied opinions, including fruit, as to what the Stomatium ("Hardy Tiger Jaws") flowers smell like. 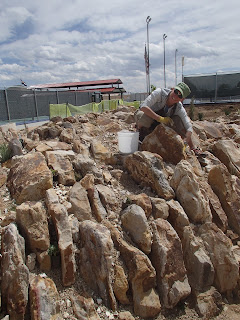 Deb came down from Boulder several times to get sandy hands. She's been madly engaged with this whole crevice garden style thing.  I'm jealous because I think she was having more fun that I. 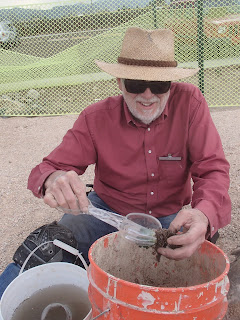 Ken was a stalwart presence for the planting.  He made lots of friends by bringing snacks.