The Jone's or Desert Bluestar

This beastie is well past bloom now, nearly ripe in seed.  It must be plugged until everyone knows about it:  An incredibly long-lived and sturdy (if slow-moving) desert fella (or gal...) that is not rare as much as quite limited in range in nature, and it is recently more available in nurseries. Go get one.
Well, actualy, it is on some governmental "rare plant" list or another. 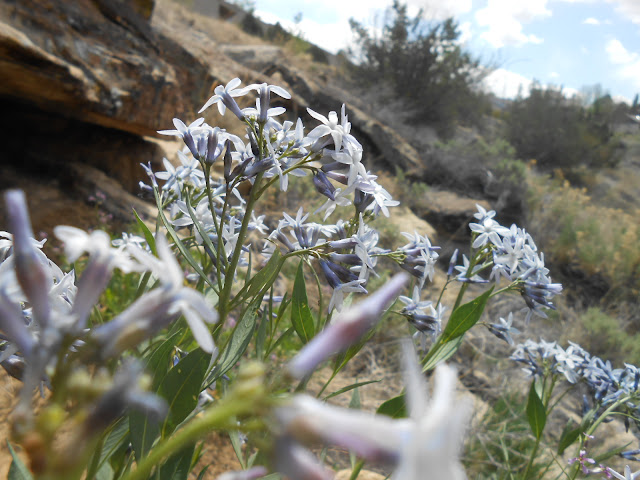 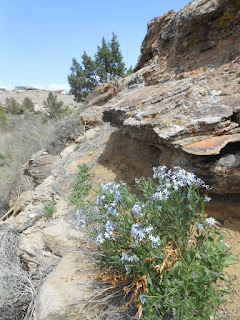 The above shots are wild plants which may actually be within the city limits of  Grand Junction, CO.

I recently planted one of these in a landscape in the heat of the high nineties we're having, and totally forgot to put a shade on it.  This new plant gets water once a week or two.  It has not flinched, not wilted the smallest bit.  Grow it if you don't already.
Posted by Kenton J. Seth at 11:55 PM 2 comments:

Public Service #4: A New Technique for Slaying the Bermudagrass Dragon.

Bermudagrass is a beast.   (Cynodon dactylon and friends) A warm-season (summer) sod-forming grass with incredibly aggressive and tough above- and below-ground rhzomes/stolons.  It's great if you want it, but hellish when you don't.
Removing it by hand form my veg garden has confirmed the lore that plenty of its rhizomes occur well below a foot underground.  It's a beast.


A search of the net and the library for ways to remove Bermudagrass provides a few options.  (1. Spray repeatedly. 2. Dig by hand for ages and ages, removing all living material.  (I've done this)  3. Fry it under plastic tarp for at least a year.  4.  Smother it with tightly pinned layers of weed fabric.

Well, none of these were going to work very well for my garden client, but we almost resigned on one... until a miracle revealed itself: 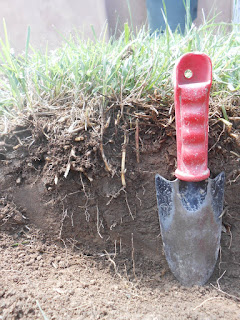 This particular lawn of Bermudagrass mostly had rhizomes within the top two inches, like a normal sod-grass.  Wierd.  For the records, a few spots were indeed deeper.  But not much. We've already dug most of those out.  So, miracle of miracles, a rented sod cutter, set to two inches, did a bang up job of decapitating this Hydra.  I want to type the word again: Miracle.   What profound Providence.
Now we are moving on with the dryland/native/unwatered garden.

The summation:
Technique #5 for Bermudagrass removal:  Don't assume that your patch of Bermudagrass has its roots wrapped around the subway system in Shanghai: Actually check if the rhizomes are as deep as feared. 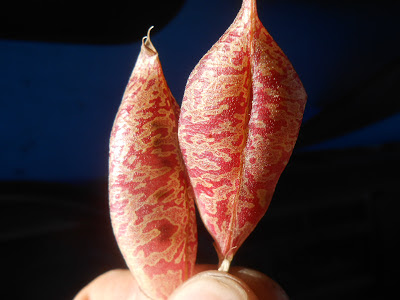 This is probably Astragalus megacarpus, growing in bentonite clay near the Rattlesnake Arches.


Ahh, another plant whose name sounds like an internal organ disease.
This plant has a chance of being a different species: namely a wierd A. ceramicus ssp or A. whitneyi. Or yet another one.

Tonight I have the great pleasure of hosting Panayoti and Jan while he gives a couple lectures in town.  This evening's hardy cactus program was well recieved and much enjoyed by the local Chinle Chapter of the Cactus and Succulent Society.
Posted by Kenton J. Seth at 10:47 PM 1 comment:

Is is a topical medication for the tender spot on your leg?
Is it an incantation that summons a miniature man in a little green robe, looking confused?
Is it a social mistake that makes girls instantly turn away from you?

No- it's a plant.
A very pretty little plant.  Medium-size, maybe. Two feet. 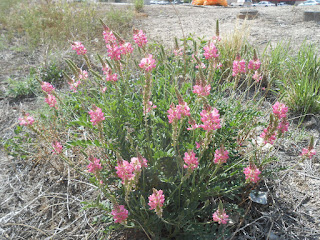 It took me a while to identify, because it was overlooked in Colorado Flora: Western Slope, meant to identify any plants which occur here.  But it was in Intermountain Flora.  The wierd seeds proved that it was not a normal pea-family local. 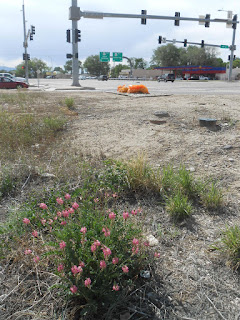 I first saw it last year in a barren lot  around Grand Junction's now long-empty institution I remember as a kid: "Gator's Restaurant" on the Southeast corner of the I-70 Business loop and 30 Roads.
A Bubblegum-pink bushy thing waved at me, blooming for a long time in a truly crisp vacant lot. 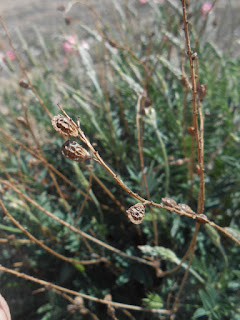 It's not rare, and it's not native.  It's a dryland-asian (Like all the good forage crops)  used by rangeland managers in the same manner as its similarly-shaped relative:  Alfalfa, Medicago sativa.   (Also Asian and dry-growing) 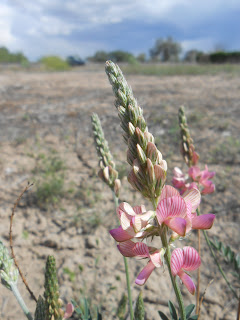 What intrests me about it is this:
1. It's beautiful.   Look at those striped banners.  They are literally, botanically called banners.
2. It's tougher than heck.  Look where it's growing.
3.  It seems to rebloom or bloom for a long time.

But, it could be a weed in a cultivated setting.  Does anyone know?  Hard to know for sure when it's not even in our local floristic books.  Stay tuned, for this baby's going to get trialed as a showy landscape plant for the inirrigated landscape.
I'm not below growing something as common as alfalfa when it's this good.