Crevice Gardens of the Future 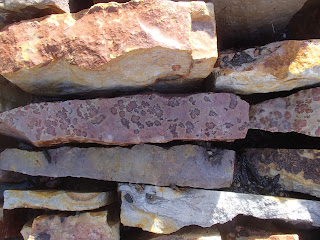 The culture expands, the craze continues.  I guess it is bucking the definition of a fad, rooting deeper while it expands in complexity.  Folks around the world are trying new things with crevice gardens right this moment, and here are a few fresh projects that I am aware of in North America.

Enjoy some previews of gardens-in-the-making which will surely be known in articles, books, blogs, and lectures in future years. 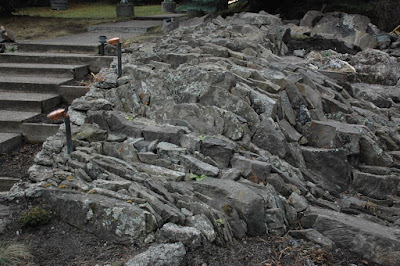 Yaro Horachek in Calgary, Canada with a natural predisposition of crevice gardening in his Czech blood, is working on his new crevice section. It makes good use of a moist north slope and incorporates tufa stone pieces as well.  His life as a geologist means that he will certainly also join the big experiments of artificial soils and have some results in time to share with the world.

The Czechs, as many are aware, are the historical nexus of the development of crevice gardening which elevated and lithified it into a timeless art form.  That nexus will be pulsing its influence into the world again at the 3rd Czech International Rock Garden Conference in Prague in May, where piles of internationals including myself will bask in the glow of the masters. We will take home, to our proper places world-wide, knowledge and inspiration like so many affectionate seeds. 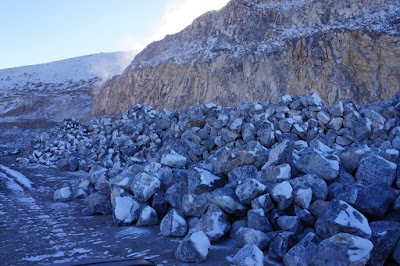 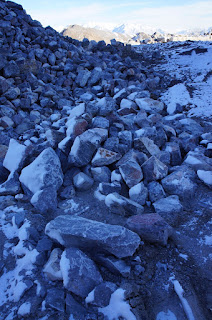 Susan Sims, whom repeat readers will know as Susan-in-the-pink-hat, in Orem, Utah (Near Salt Lake) doesn't do anything half-heartedly, so her stewing designs to use this tumbled local Utah limestone in a naturalistic diagonal-strata is sure to rock our world.

She has been gathering inspiration and data from every rock-garden expert she can find. With her incredible natural art and design talent, I wait with bated breath. 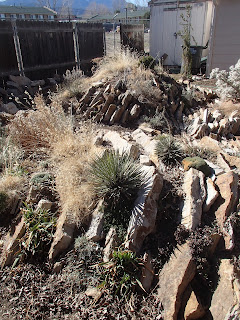 Diagonal orientation is not new.  The earliest examples of this in Colorado have at once been long-time inspirations for us and also trials where we learned, it seems to me, that especially clay-based soils can be crushed under leaning rocks as they settle, reducing the good interior drainage of the soil. (Although surface drainage and rain accumulation effects still work).    This is because most of the rocks don't touch one another.

John Lawyer (left) in Colorado Springs has a solution; all of his leaning rocks are supported by other rocks, so big gaps are laterally between smaller, supportive "struts" or "shims" if you will.  This leaves a variety of tiny to generous gaps between the stones for big and small plants.  The key is that the rocks all touch one another.  It takes more rocks, but he's growing things much better in this situation, including paintbrush. (Castilleja integra) 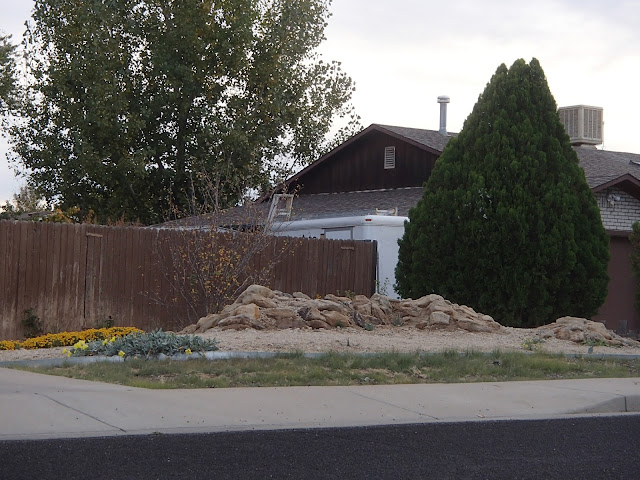 Not to be left out, I had to re-visit diagonalism using Mr. Lawyer's tricks in 2016.  But additionally, mine also plays with a formal Blue grama meadow-strip in front, no irrigation, and a passive-rainwater harvesting earth-basin behind it, fed from a very large roof, which it's south-facing slope returns down into, creating a microclimate I've never seen before. What will we call it? Seasonally-wet-but-unirrigated-crevice?  What on earth will grow in there?  Festuca ovina for a start. 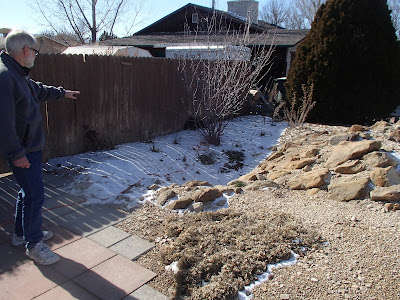 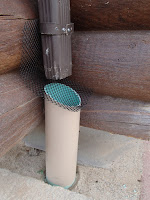 Frankly, diagonal construction like this is much harder, slower, and admittedly frustrating to build for a vertical classic-czech-school ingrained student like myself.  But we much branch out, and I cannot resist the fact that all of our local natural outcrops in Western Colorado are diagonal and eroded like this.

Of course, the plants we're trying at the Rauch house are the exciting icing on the rocky cake. 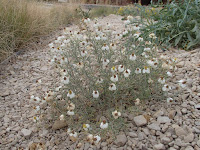 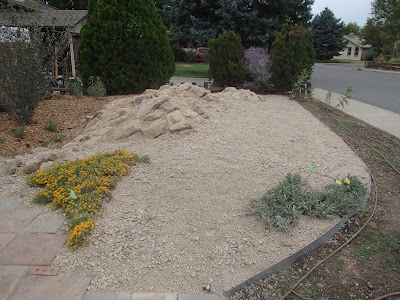 Zinnia acerosa is a perennial desert Zinnia (but in white!) like the above mass of gold Zinnia grandiflora, and we are trying it for hardiness.  It loved the summer and has overwintered in this very mild winter, despite the seeds being collected from under a Saguaro outside of Tucson, AZ.  I have seed from colder places to try, too.


We've also got a small herd of the improbably colourful Manfreda maculosa, and a single native perennial sensitive-plant, Schrankia nuttalii,  in trail.  Stay tuned for results for those. 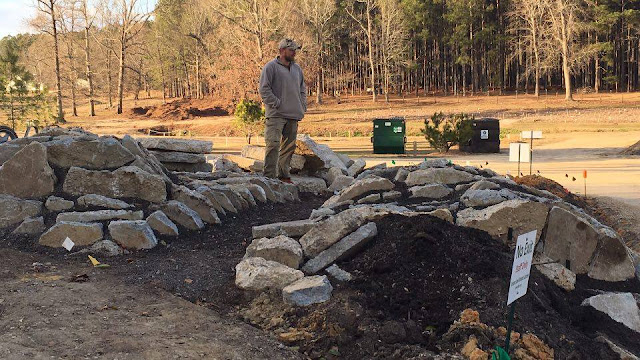 Many are aware of what is probably America's most serious current hardcore plant-nut mailorder nursery, the only one-X rated plant catalogue I've ever seen, and they offer incredibly healthy plants of incredible species you truly can't get elsewhere.  How about a corpse-flower? No, not the little 4' one I grow and bloomed, but the king-daddy.  Yes, they sell that.  They revolutionised my garden and blew my mind as a teenager, and my teen-ager-planted garden still has little palm trees (in Colorado, yes) in it thanks to them.  (For your irrigated, guilty-pleasure garden, zone 5 and warmer, the hardiest is the needle palm!)

Plant Delights is Tony Avent's brainchild, which spawned their own Juniper Level Botanic Garden.   They have a small rock garden and being some of the craziest plant nuts anywhere, it was only a matter of time before they built a crevice garden. 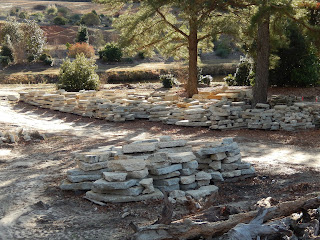 Jeremy Schmidt is using some 50 tons of concrete, salvaged from a barn they razed at the nursery.  This garden wil be incredibly important as the flagship of crevice garden experiments in the southeastern United States.  I started a small crevice garden there in Raleigh at the venerable J.C. Raulston, Arboretum there in Raleigh, NC, but Plant Delights will have a massive space for their massive brains to test the catches from their massive dragnets of botanical curiosity.
They specialise in many genera, including agaves, and agaves are more often-than-not natural crevice-dwellers. 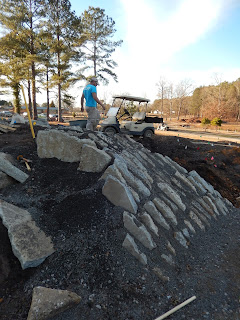 We should all be really jazzed to see what these whackoes pull off.  I'm particularly excited because:
1. The function/effect of crevice gardens needs to be tried in more climates, and
2. They will find more weird plants to try than anyone else, and
3. Let's see more recycled concrete gardens ("urbanite" as some are calling it) - which I knew I was unlikely to do myself.  I think it actually honours the genius loci of places where big, bold, busty, natural rocks are not such a common part of the daily vista.  It holds a big future for urban/city crevice gardens...


That bill is getting filled. 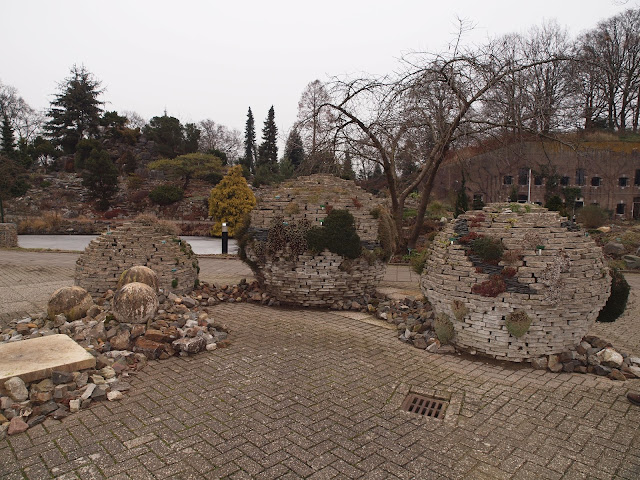 Now, recycled concrete crevice gardens have famously been done before at the Utrecht Botanic Gardens in Holland. (Winter picture courtesy of Malcolm McGregor. )  The builders of these fantastical spheres used scoria in the soil mix between the layers to keep the soil from being totally crushed by the slabs. 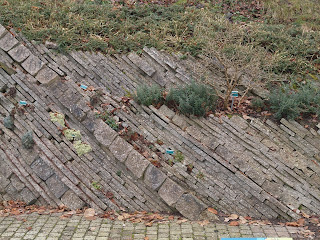 
Let's go back to Colorado. 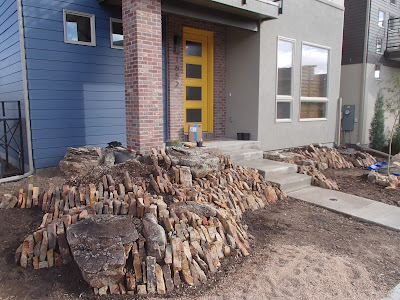 And finally, I'm excited about the modern aesthetic's influence in crevice gardens.  Above, the gumball-coloured "Cherokee" sandstone  of the garden-in-process looks totally at home next to this new family house in Fort Collins, CO.  (Laura Shaffer/Kenton Seth design) The first picture on this post is that incredible stone, which somehow manages to naturally have bits of the bright colours that match the house.  Well played, Laura!  She says Agave utahensis ssp. kaibabensis looks to have overwintered there.

(To come: a big batty blog, where I opine and agree with High Country Gardens that it is the hardiest of all agaves. This conclusion after many long walks, old books read, long hikes, many half-guiltful tanks of gas, winter camp-sites, strange animals, and few showers.) 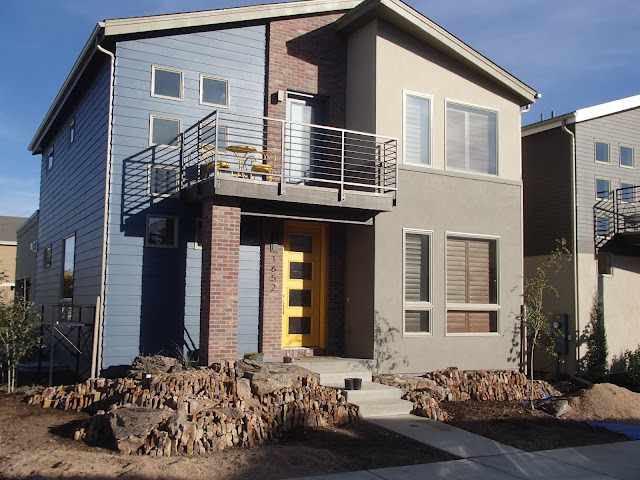