The Art of an Annex: Crevice Innovation in New Zealand

I told you so.

That the New Zealand rock gardeners would take crevice gardens into their own hands and innovate right away. While I was there, we did make plans for an extension of the crevice garden to span across the main path from its main seat in the heather garden to include a corner of the main rock garden which needed renovating anyhow, so we rationed some stone for that future project.

My friend Hamish sent me these pictures of what they recently did, and I'd like to point out some specifics of good art in its design, and some opinions of mine. All photos are his. There is a thorough write-up that recently came out in the printed NZAGS bulletin on the project.

They've also put out a really great "How to make a small crevice garden" brochure, something the world really needed (and why I hadn't done it already? I'm an idiot.)

So, this is the main Crevice Garden at the Christchurch botanic- the new annex is visible in the background next to the blue figure. (Looks like they've got some temporary ropes to keep folks off the bed- I've seen this so often that a new crevice garden is climbing-candy until plants have well grown and make it obvious that it's not a toy!) 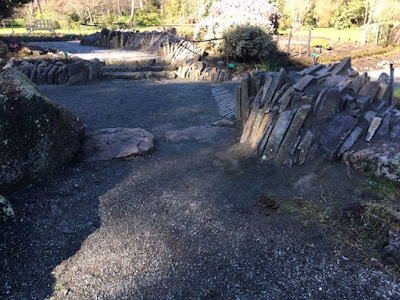 New annex in foreground, main installation in back. 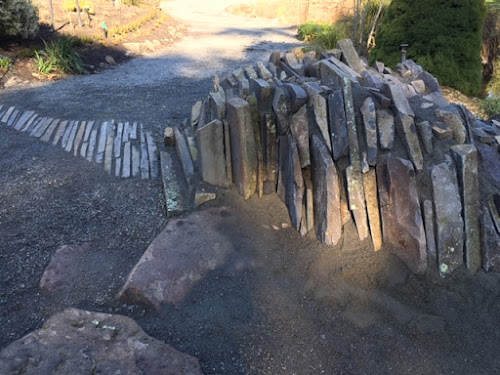 What I wanted to discuss was this.  Notice how it is :

1. Oriented with the "strata" of the other garden.
2. the Annex is a massive shape that is about the same size and form as the big historic stones
3. The flat-topped stones in the path follow the logic...

Now the path treatment is what I wanted to get editorial about. I love this.
There has long been discussion on the ZZ-style of setting stones in the path through a crevice garden, oriented with the strata, but whose tops are flat for good foot use. The idea is that it looks like a human roadcut has been made through solid stone. It also offers great stability, adding a solid "footing" for rocks that make the base of the garden.  It's also super useful as steps within a sloping crevice garden. It was my favorite part of my last Vail project, in fact.
I agree with the concept, but what has bothered me is that it often appears in places that meet otherwise naturalistic, eroded-looking faces that "return" to the ground. And I would argue that in nature, an eroded cliff face like that dives underground and is buried by soil, not by mechanically cut rock surfaces. I've never liked where a nice crevice cliff meets a flat-creviced path. If a cliff did meet a cut path, then by that logic, the vertical cliff, too, would have been clean-cut (and in the few gardens where I've done this, that is how I treated it).  Basically I feel that the path paved with stones is cute, and in-keeping, but not strictly really natural or necessarily artistic. If it were, it would have irregularity or some cue that it, too, is a naturalistic stone, rather than a novel patio paving that sort-of matches the rock garden. It usually looks to me like there were leftover rocks that needed disposal.
BUT, here is where it works for me.  And very well. Here, the natural cliffs return to the ground and it meets gravel chipped surface,  suggesting the rest of the form is buried underground, but where we see the path-grade flat crevice surface, it look every bit like it was a solid mass- that was cut for the path.  It's even the shape of a big sliver of rock. I love this so much. It's so well done.  What is more (bonus art points as far as I'm concerned) it functions in the design of the garden as an eye-catch for the passerby on that wide main path who is looking at the ground and cruising through the park on their way to work. (Wide/strait paths lend themselves to fast walking)   It catches the ground-level eye and draws a shoe-staring viewer to look at the garden that flanks them welcomely.  I love it.
We're going to have to get to work, and hard! - the New Zealanders are putting us to shame!
Posted by Kenton J. Seth at 3:42 PM 5 comments: