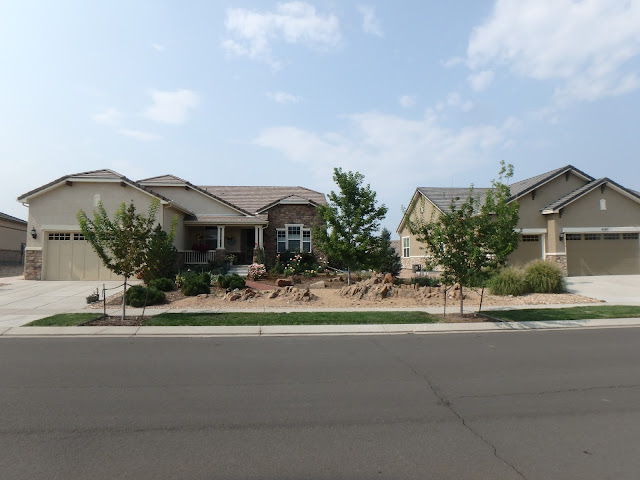 Just because they are retired does not mean the Mortons intend to sit around.  Armed with levity and good sense, they are going to war with turf.

Relatively recent settlers in a large new Broomfield, CO development, the Mortons got settled in before assessing their landscape and finding that it was excessive in sod.  On their own property, they have been rose and flower gardening for years, and this summer took out the remainder of lawn to have an amusingly two part: “His and hers,” if you will- crevice garden, which we put in to accomodate his dream of growing showy cacti like he did back in Tucson, and her desire for colorful alpine rock garden plants. (The old lawn sprinklers were retrofitted to continue irrigating the alpine side, although about half the water, and capped entirely off for the desert/cacti side).

An important sidenote about cacti in Denver: the natural precipitation of the greater Denver area is higher than many places that collector’s cacti come from, and their natural homes are often hotter, so just growing them in Eastern Colorado means plants will get an extra boost by just being under that sky!  Supplemental water should be given judiciously if at all to avoid rotting plants and encouraging weeds. 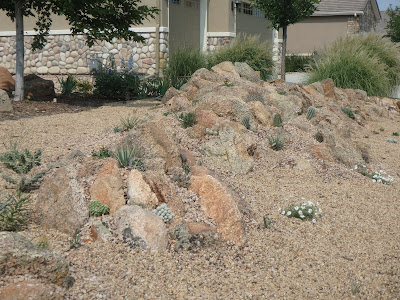 The Morton’s Crevice garden “range” a few months after planting.

Their prior life in Tucson, Arizona informed their values where local-climate sensibility, economy, and conservation are concerned.  They feel that there will not be real change on the Front Range of Colorado unless there are regular water restrictions to force the public into a new norm.  They smile with intention when they talk about this.

And the Morton’s aren’t into just talking about doing stuff. 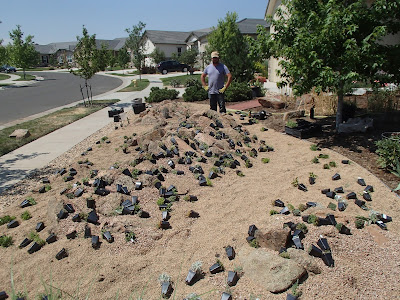 It’s not like taking out grass and putting in a crevice garden reduced the amount of plants.  Here, Mike stands in the armada of first-fodder plants to get a base palette growing.

But the parkway- that strip of grass between the sidewalk and the street- they don’t own it, and most homeowners don’t- but they are required to maintain and water it, by, as usual, CIty and Homeowner’s Assiciation. The Mortons have already infiltrated the HOA, taken the proper channels, but have found that with the city, they cannot get permission and will have to beg forgiveness instead when they take out only a portion of that grass!

Isn’t it amazing to think that this social change is not just an uphill climb from a public culture of water-overuse normalcy, but also roadblocked by official, municipal regulations? 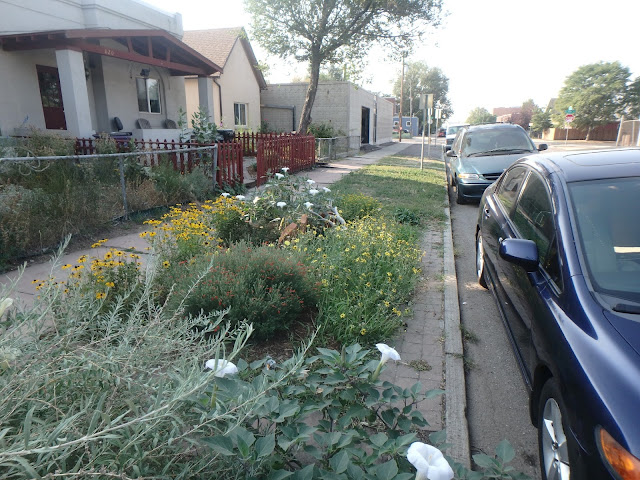 Back in Downtown Denver, my heart was warmed by the possibility of what a parkway can be: a glorious parkway strip settling nicely into a colorful maturity. A Roots Medicine Gardens design, it receives no water at all, and is a dynamic color fest even in the first week of September, immediately upon the heels of a hot summer which left all the street trees in Denver looking as lush as potato chips.  You’d think it was April or something.