Two for the Bugs


"Knowing the insects doubles one's gardening pleasure..."
from my friend John, for whom a love of bugs runs in the family. 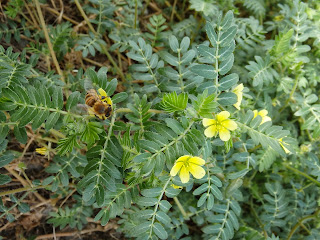 A honeybee redeems a Goathead/Puncturevine (Tribulus terrestris) by visiting it.
See, there is a purpose for even the most hated of weeds.
Well, -almost redeems it. We can look at this as lemonade from lemons... 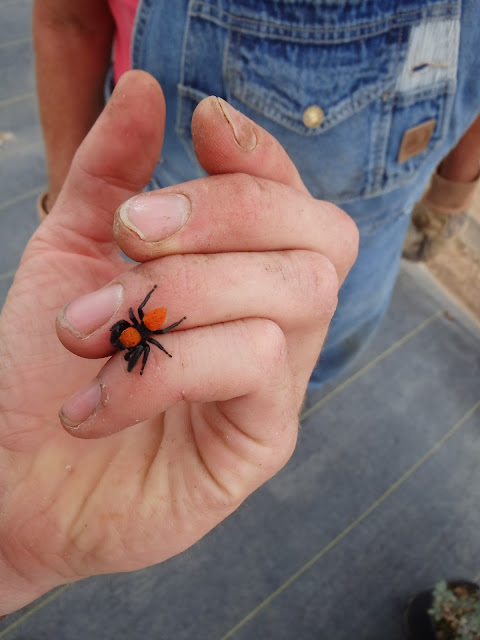 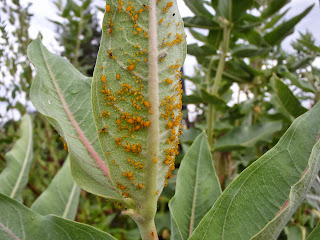 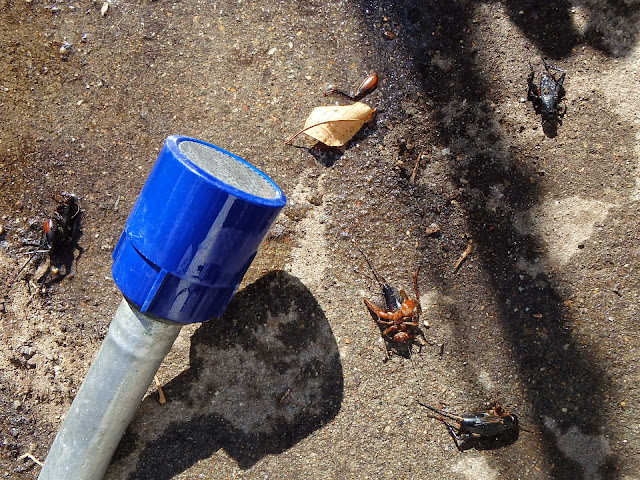 I had read the warning in drip-system books about bugs crawling into things and didn't really think much about it. But I was reminded when these four tragic gals turned out to be the clog in the wand-end rose; these crickets entered from the other end of the tube at the spigot (which I'd taken off and drained as a freeze precaution.) Nice. I must remember to clean out all the nursery's tubes before I turn them on next spring! Lesson: find some sort of cap to put on open hose/tubes. 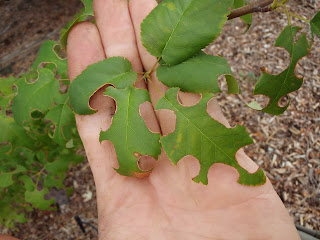 Leafcutter Bee activity on leaves of Amelanchier alnifolia. Rose leaves are among the more common thin-textured leaves which are used. The philosopher in me really enjoys the fact that there is no real solution to this problem (no sprays, OK?) short of covering your entire shrub/tree with a fine veil of some sort pre-emptively in spring. I've never heard of anyone troubling themselves so much- Gardening should be fun.

Bad News.
But rare news its seems, thankfully; no-one seems to have heard of this, which excites the mission of this blog- to document new things in this universally-widening but often redundant internet. 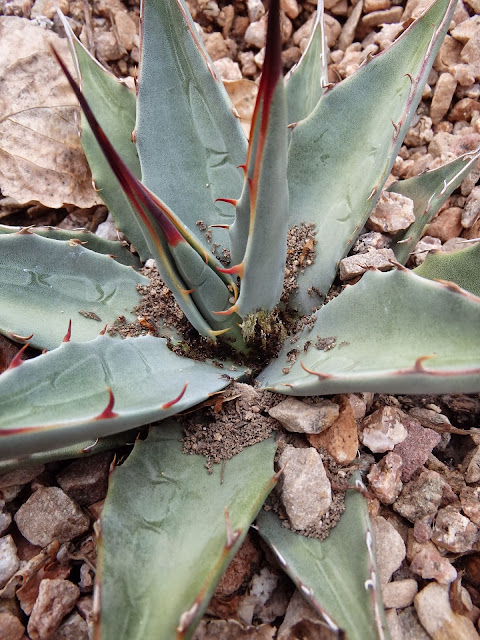 This is either Agave parryi or A. p. neomexicana- I forget- but the bases of its leaves are being consumed by "Pavement Ants" (perhaps Tetramorium caespitosum) under a protective shell of glued-together dirt bits, which they will do when they are ranching aphids on the base of a plant, like strawberries.  I have brushed this shell off a bit to reveal their dirty work! 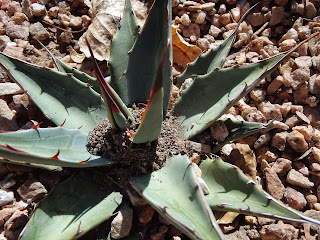 Dirt-awning intact.  Seeing this on a plant disturbs me. It always means going to war with friends, a war which generally doesn't really end, but ebb and flow. 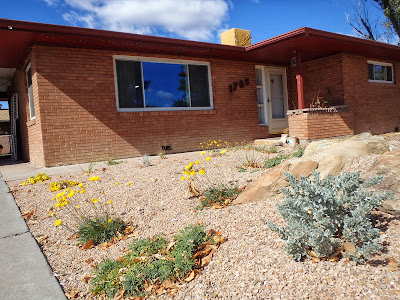 The story and my working theory are this:  This Agave is not the only plant being eaten; they are otherwise exemplary newly established plants in a prvate home landscape I made this year in Grand Junction.  A Few months after planting, the plants all grew phenomenally after the monsoon rains, and this is when a Globemallow died out. Upon closer inspection, it had been "girdled" by ants, who had built their dirt-shed around the base of the plant and removed the joicy outer lay of the stems of Sphaeralcea grossularifolia (Globe Mallow), Hymenoxys/Tetraneuris/Haplopappus scaposa (Sunshine Daisy/ Perky-Sue),  Desert four-o-clock (Mirabilis multiflora) and Calylophus hartwegii var. fendleri (Fendler's Sundrops.)   They have so far not touched Prairie Zinnia (Zinnia gradifora), Mohave Sage (Salvia dorrii), Claret Cups (Echinocereus triglochidiatus/mojavensis) nor Saltbush (Atriplex confertifolia)

The landscape has been organic (in the popular sense) so far and has "sustainability" written all over its insides, so I tried "natural" methods: garlic and pepper powders.  The ants, I thnk, rubbed their jointed limbs together and said "Oh, we love Itialian!" and chowed down again.  I tried Cayenne pepper. The bits that did not wash away in the rain were ignored by the ants.  Who kept eating.  I was out of town to re-apply, so the client dumped a fat heap of it down into the rosette, and what appears to have actually stopped the ants was that the rain-wet Cayenne pepper became a hard cake physically keeping them from getting down into it again.  Alas.

My theory is this.  It's pretty weak. Once upon an April, this landscape was short-mowed bermudagrass and weeds, (mostly Kochia and Purslane), and the ants were living there sustaining themselves for years on the mini-ecology of weed parts and bugs that eat the weeds.  This summer, some clever dick with a pickaxe came in, removed the bermuda sod, weeds, most organic material (including surface weeds seeds) , added a thin layer of compost, and a thick layer of pea gravel dotted with native plants.  A real moonscape compared to the dusty jungle of weedy turf the ants had built their empire in.
Having had everything taken away, a sizable population of ants underground became more desperate than normal, forcing them to acquire new tastes, or die.
The End. 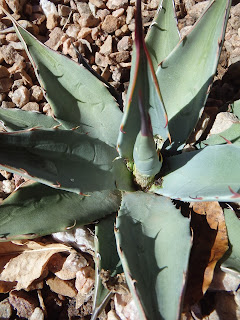 With the ants brushed away, too, the poor plant's fibers are exposed. This was early on and they returned several times to make it much worse.  I hope it survives the winter.

If you, too have ever seen this, please share, as it seems pretty undocumented.