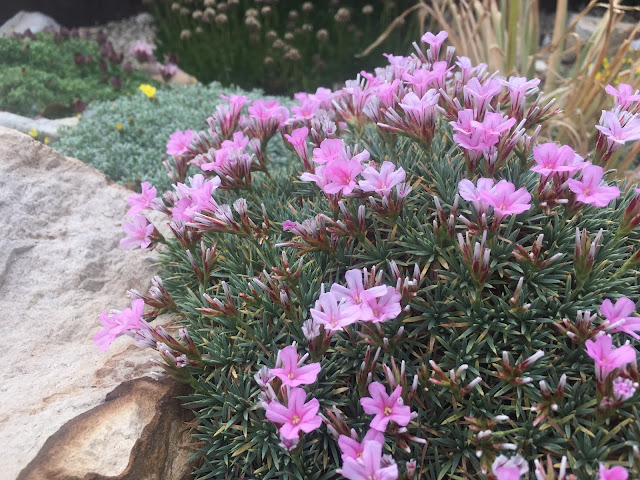 Acantholimon caesarium, sold by Arrowhead Alpines and growing at APEX.

As a drooling young rock gardener, I was told time and time again by the old timers that Acantholimon seed was always 95% empty, infertile seed, for some mysterious reason. I even saw a botanical illustration once that pointed to the dried out flower and called it the seed. Everyone has a story about it: never growing from seed they got from exchanges, only growing from certain czech seed hunters' seed, et cetera.  And everyone had a different explanation for why they were rare from seed, leaving most to be grown from cuttings. And yet you'd see the odd seed volunteer plant appearing here and there in folks' gardens. 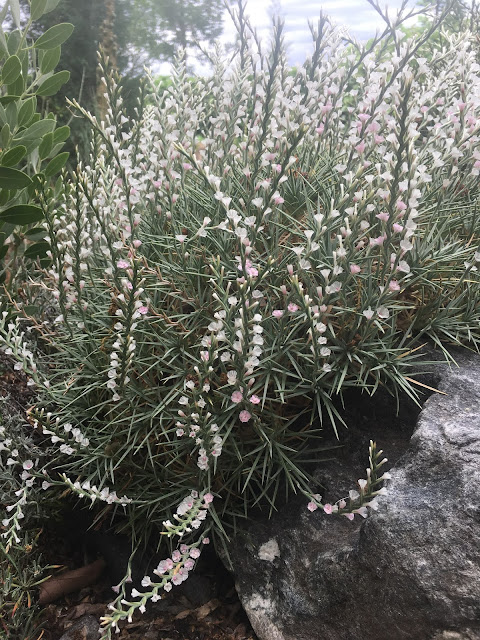 (Soft pink flowers of Acantholimon armenum are gracefully replaced by similar white clayx which are generously full of lies and disappointment. None of these have been fertile, ever.)

I've beat my head into this wall for long enough to share this:

Some plants produce mostly good seed, others none. Most produce little.  I expect it is a pollination thing- is there a bug with the right sized lips or tongue or whatever to do the deed? When I looked into it, I found just one paper in turkish about sweat bees pollinating them, but at APEX, Acantholimon halophilum is covered with mostly honeybees and a few others. Those plants usually produce loads of good seed, last year was an exception. Also, perhaps importantly, it may be necessary for there to be more than one lonesome-george plant so they can pollinate one another. This is conjecture.

Whatever the case, the good news is this: you can check and see if seed is viable- with a plump embryo and endosperm. You need a pudgy parachute. Rumour and oral history says a czech seed hunter used the term "pregnant ballerinas" to describe the look of a good seed. It's just visible. But even better, just smush off the papery calyx from the seed and see if it has the goods:

A thing that looks the size, shape, and color of a black rice grain. Now you know.  I wish I'd known years ago. 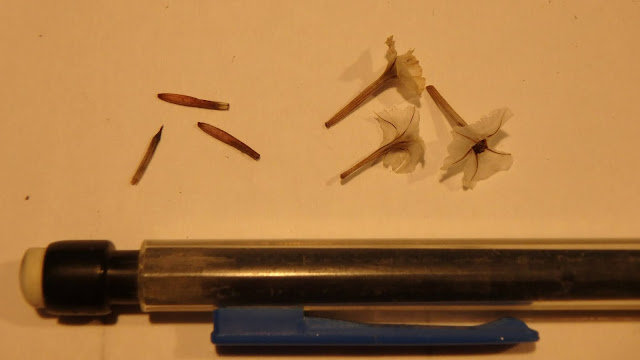 Acantholimon seed. See two good ones and something that isn't, on the left. On the right, three familiar entire seed contraptions- two look full and promising and the middle/lower one looks empty.

Thanks to Mike Bone at DBG for being the last person I bugged about this and confirming what I thought I'd figured out.

Now you can grow out sweet little pots of seedlings like Bill Adams' in the picture, or avoid empty pots resulting from empty seed. 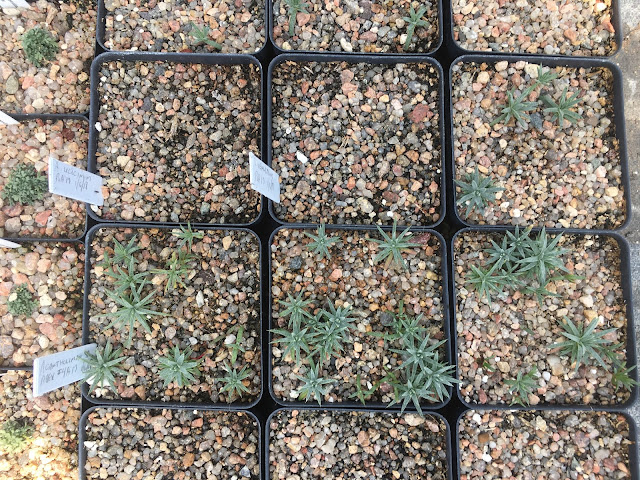 Do you love ornamental fescues? The garden varieties are wonderful little clumps of evergreen softness. They seem like the perfect entourage for any meadow plants, and I’m really into meadows right now. So I need that. Like a sweet tooth.

But I’ve long observed large commercial plantings of Festuca ‘Boulder Blue’ and his brothers just die off after a few years- they just don’t seem to live very long, especially down here in a hot desert valley. It seems they do better in the mountain towns of Colorado, and even Denver and Fort Collins. But I cannot live without some fescue action. Lots of it. So here let me share what I’ve learned about them. For reference, all of these I'm comparing are irrigated once a week in summer, less in spring/fall, no exceptions. Here are the seven taxa I’ve tried in this oven we call the Grand Valley: 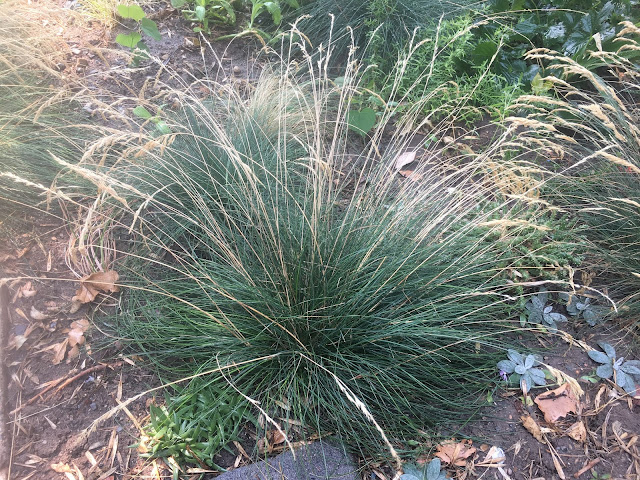 Festuca ovina seems to do well with dryness and part shade. Its seed is cheap. It has a lovely delicate stature just under a foot. I was even a star performer in unwatered landscapes in their first year. But year 2 or 3.... POOF!  Gone. It doesn't replace itself with seedlings reliably enough for that not to be a serious problem. In the mountains it has been a stalwart weed suppressor and living for years and years. 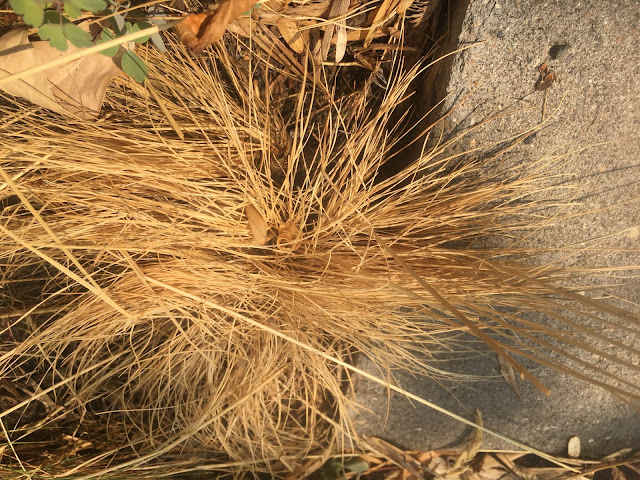 This is Festuca saximontata, seed grown, at its best year two. It's being useful inside the compost bin about now. The thing is, Grand Junction, I believe, crosses a threshold of heat that is just too much for some plants. If it does not outright kill them, it slows them way down, keeps them from ever amounting to much, or slams the gas pedal down on their aging process.
This species might be the worst one for dying young in this climate.
"Dry" in the mountains means something different than "dry" down here when it is 100F (38C) for weeks, and no rain for months.  And I am certain plants notice. 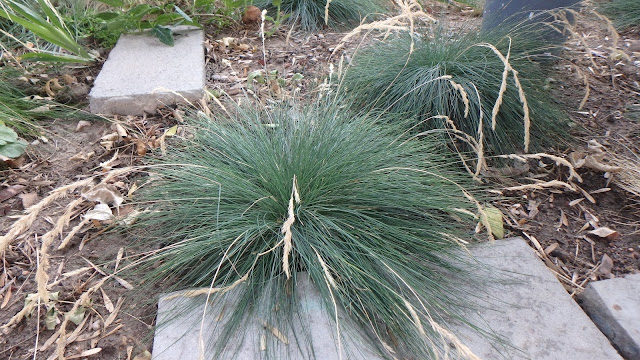 It's easy to get Festuca amethystina  mixed up with ovina; but this one has a certain purple cast to the leaves. It's still in its youth, so I'm avoiding a love affair with it until it proves itself. I do like the sparser blooming so that colorful neighboring flowers or its own rich leaves are not hidden.
Say a little prayer for the lifespan of tufted fescue. 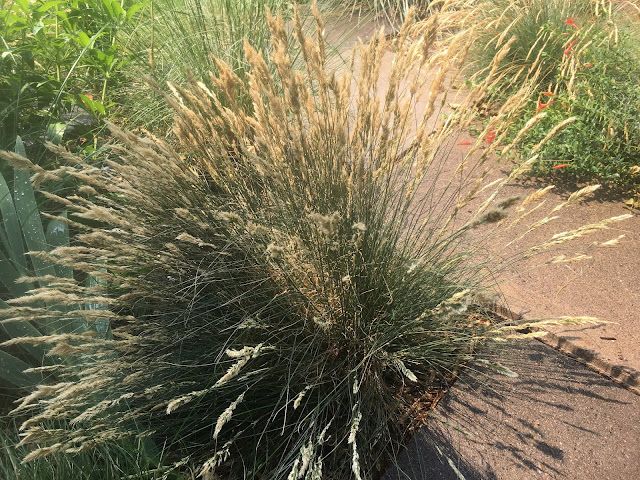 But lo! Who is this handsome beast!? 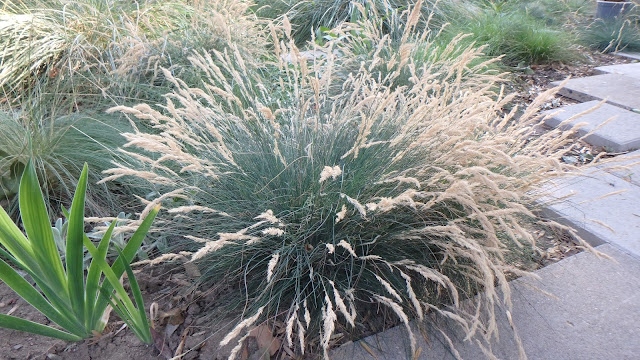 Who is this generous fountain of flower, this urgent urchin, this dense denizen, this total rockstar?   This is a selection of Festuca ovina from Turkey called 'Eiler's Beauty.' 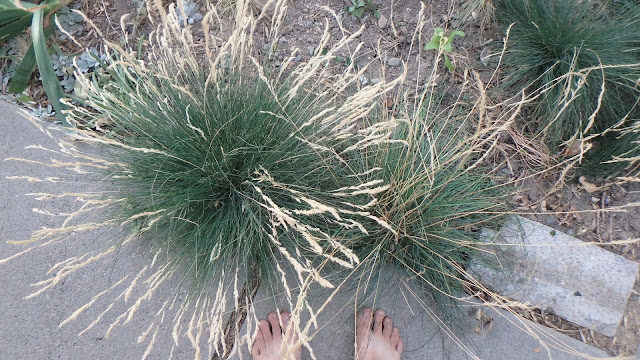 Just compare 'Eiler's Beauty' (left) to a regular sheep fescue Festuca ovina (right).  So much flower power.
So far, this guy has not died yet.  It's now two years past the cutoff point that throws the others in the bodybag. I really hope it keeps going. If it dies at seven years, I think I'll be OK with that. 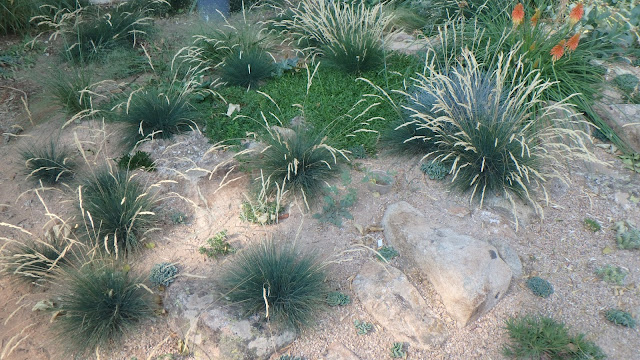 Its smallness has made it my first grass to trial as a steppe garden/rock garden transition grass, because it can cast tiny shadows on cushion plants huddled under it without smothering them. I have long wanted to replicate the conditions of a wild steppe with the open spacing between clump grasses, wondering if it created a special environment for some of the more elusive steppe plants, especially rot-prone geophytes. 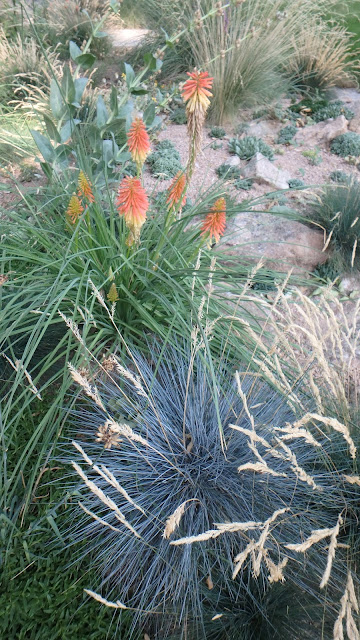 Festuca glauca 'Beyond Blue'  is indeed more blue that other blue urchin things widely on the market. I don't know that we really need yet another, bluer blue, brighter light, louder speaker, faster car, bigger house, taller skyscraper, oranger orange, longer johnson or whatever to make life better- the wizards are always at work. Whatever. It does of course compliment orange Kniphofia (probably 'Papaya Creamsicle' or yet another over-the-top ridiculous name for a decent plant as seems tradition.) 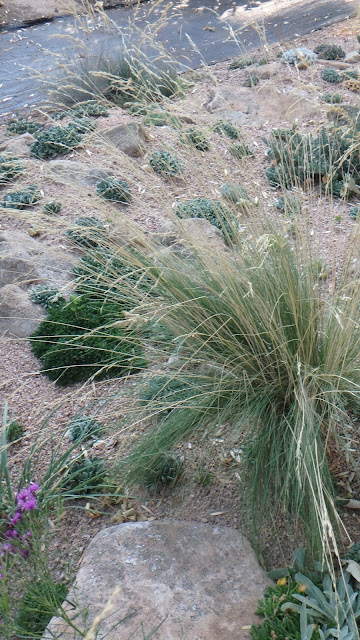 Oooooo, oh lordy. The first season for Festica arizonica, it develops a very fine, very clean limey-green tussock of leaves that makes the common Mexican Feathergrass (Nasella tenuissima)  seem like an unrefined mutt. For a month or more, everyone asked what it was, in a garden of hundreds of plants. Then the flowers come out, looking a little wilder and natural and less formal, sending the plant dancing into the garden's background with arms waving comfortably in light breezes. 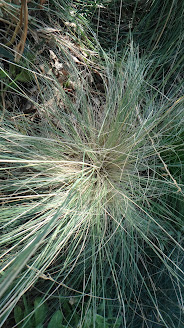 But then, year 2 or 3, the ratio of dead to living leaves slides down that slippery slope... But you love it and you remember its glory days, so you keep it
just in case it's still alive. 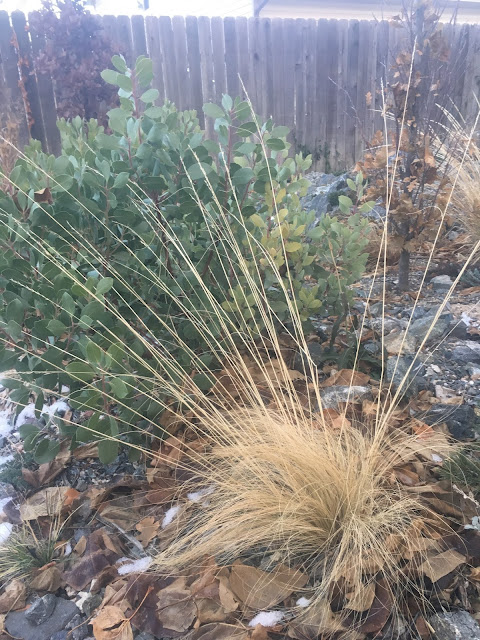 I assumed it was fully winter dormant here, but in the third spring when fescues are supposed to turn green, this, the specimen that originally hooked my heart to them, did not wake up.  I tried burning a few to see if that would stimulate something.
Cute.
No. Dead is dead.
They've all eventually done this. Damn. 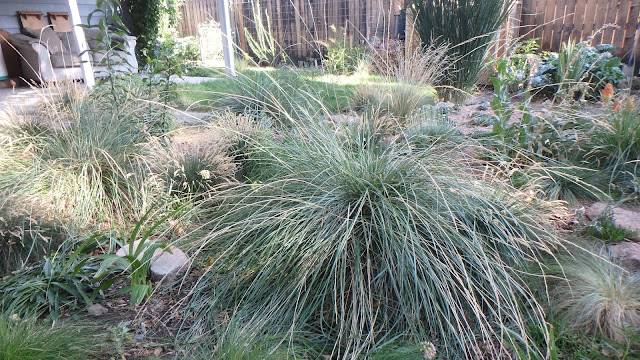 Luckily, there is one more reliable species to discuss in this otherwise mostly disappointing poop show.
But it's big. 3' (1m) or more wide. Festuca mairei is the Atlas Fescue. Basically a green and improved version of blue oat grass (Helictotrichon sempervirens) It lives forever, it's evergreen, it tolerates dryness, and tolerates shade better than any other grass I've grown in Colorado. It is a graceful thing that my photo doesn't betray, and gets more graceful with age. It is a structural backbone plant that holds the garden together like the bass and cellos in an orchestra, never standing out with the bright melody. Being evergreen, there is no room for weeds or little flowers under it, only things like tall lilies or foxtail lilies. Why it is rare in commerce is beyond me.

Now, I have grow F. idahoensis and a few others like it in the past and I need to try them again and pay attention to their longevity. I'll let you know what happens.

Until then, seek out the Atlas Fescue if you need a shrub-like grass, and let's cross our fingers that 'Eiler's Beauty'  keeps jammin' on: 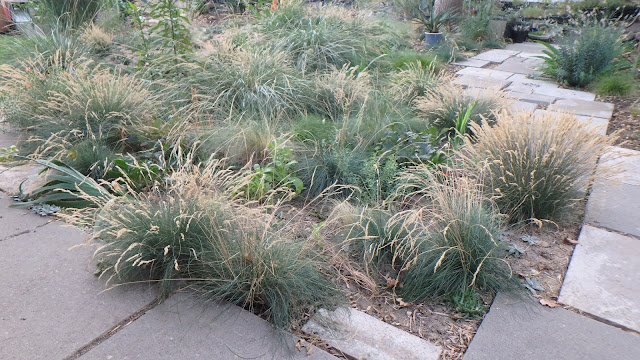