Ever find out something about a plant that sure as hell isn't in the books about them?

Hard-blooming Gaillardias are anything beyond a short-lived perennial. Usually you get seedlings off the mother plant before she dies. But last year, when I was planting bulbs in a high elevation flower bed designed by Scot Ogden, I saw shallow rhizomes everywhere. I keep an eye on that bed to keep certain nasty rhizomatous grasses out. But these white threads- I followed them back to the plants. Whaaaaaat? I emailed Scot to find out that the Gaillardia was Amber Wheels, a seed strain based on a wild collection by Larry Vickerman of Denver Botanic's Chatfield campus.

Just to make sure, I took root cuttings. They worked.

The original plants have been humming along since 2016 with no sign of getting tired. Fantastic. 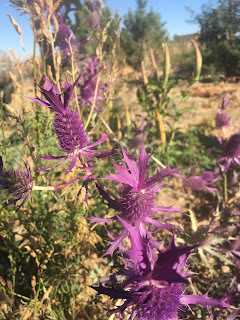 Eryngium leavenworthii- a Texas version of sea-holly.  I had to try it because some of the coolest designers I know have use it. It's listed universally as an annual. So I got seed in winter, like you do, sowed it in the greenhouse, and planted it out in spring. And it slooooooowly established. I watched those tiny puddles of plants do nearly nothing all year. As the season wore on I grew more sure they sucked for my garden, or sucked in my climate, or I sucked at growing them, and then winter came. And they lingered. 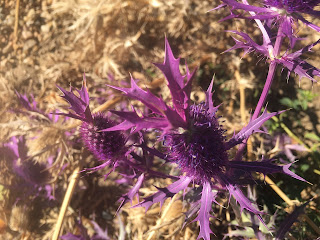 Because they are biennial for me- and a friend in Iowa told me he has the same experience. What the heck? I'm grateful. Just to write it down somewhere: Eryngium leavenworthii is biennial if it isn't annual.

I'm usually pretty careful about adopting new plants too fast because I hate to discover some plant's weakness or worse- its dark secret on a client's dime and in their garden. My friends and Chelsea (native) Nursery are even better about that. The reality of the cutting edge is that it's R&D- it's messy and unknown until tested well. 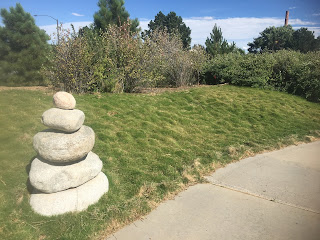 So I was slow to fully embrace dogtuff, the amazing bermudagrass that is all the rage in cutting-edge gardens in the cold dry American west. (Cynodon transvaalensis) It is native to Africa, was mysteriously found on a ranch in CO, passed between many plantsman's hands until Kelly Grummons found the ideal use for it as a super xeric, no-mow, dog-proof turf.

I was mostly leery because I was raised in a valley where bermudagrass is a horrible bane to gardens and landscapes. The typical mongrel bermudagrass has ridiculously deep rhizomes, going an average of 18" (45cm) deep invading beds and swallowing your groundcovers with its coarse leaves and dagger-sharp stolon tips and rhizomes that jamb into your feet and easily punctures sweed-cloth. Why would I risk planting a short greener version of that crap?

So I have tested it and been on a mission to find out how badly it spreads underground. I have awkwardly asked to dig post-holes in friend's gardens. Well, whaddya know. It doesn't. Not that I have found. Before I was comfortable with that, I installed a patch for a client who wanted it, but not without containing it with a deeply buried bamboo barrier. In the end that was totally unnecessary. 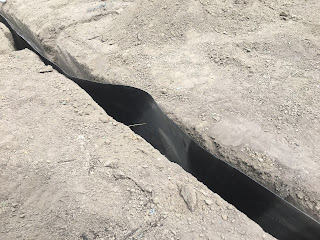 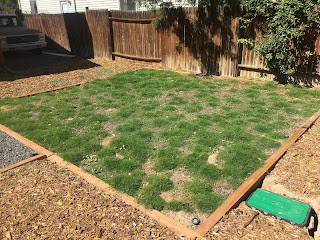 Just a month after planting plugs.

What is more- I planted it in our back garden to give us a whopping 6' (2m) wide "lawn" where several paths intersect, and that doesn't require we own a lawnmower at all. We don't. And so on principal, I've never mowed it. In fact, I didn't cut back the dead material last spring to see what would happen and.... nothing. It greened up as per usual.  Lastly- here's the biggest surprise. For fun, I watered it once in 2020. May. One good soak. And I decided to not water it until it looked stressed out, so I could test just how dry it can grow.

I waited. And waited. In August, at noon, one part looked almost imperceptibly stressed. I waited. Green again until frost.

I estimate it would be perfectly beautiful with a consistent 2 week watering schedule on any sunny soil. Now, if only I could find a basic irrigation control box that could be programmed to water that little. 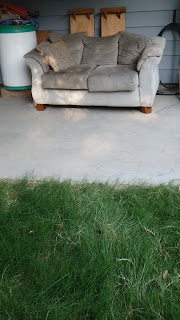 Dogtuff is good. It doesn't run.

Hi there!
Where did you find dog tuff plugs for purchase? I mulched my entire yard, and it turns out my dog doesn't like walking on mulch. Now I'm reluctantly considering a small patch of lawn!

Hi Kenton!
Where did you find DogTuff plugs for purchase? I mulched my entire yard, and lo and behold my dog doesn't like walking on mulch!
Thank you,
"Reluctantly considering a lawn" Amy

Hi Kenton!
Where did you find DogTuff plugs for purchase? I mulched my entire yard, and lo and behold my dog doesn't like walking on mulch!
Thank you,
"Reluctantly considering a lawn" Amy

Hi Amy! If you are going to have a lawn,and you have a dog, dogtuff is stellar. I love not owning a lawn mower. It does need sun- it really sucks or dies in shade. It could be plugged into an organic mulch nicely- I have established it that way and boy does it work.

I got mine from the originator directly:
https://coldhardycactus.com/pages/dog-tuff

But a friend recently told me they are booked/sold out for a bit and she got her recent batch from Todd Valley Farms in Nebraska.

I should add for accuracy that a recent dig I did in mine yielded some rhizomes- but they were very few, small, and shallow! There is the bermuda-grass behaviour I expected... and it's so mild.

Thank you for responding! I found out High Country Gardens in Colorado also has plugs of DogTuff. The info you share about shade tolerance, spreading behavior, etc. is so helpful. Thanks for sharing your knowledge!

Thank you for responding! I found out High Country Gardens in Colorado also has plugs of DogTuff. The info you share about shade tolerance, spreading behavior, etc. is so helpful. Thanks for sharing your knowledge!