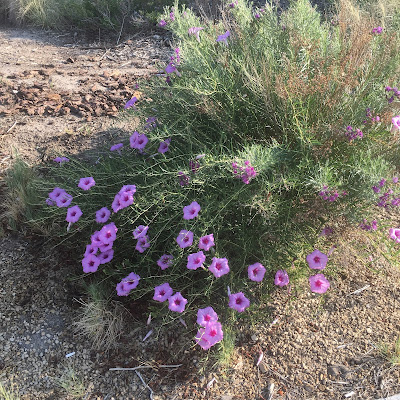 In context of establishing great plants into gardens, I have come to know a certain motley crew of remarkably unrelated and excellent plants that all seem to have the same problems- problems which may explain some of them being so absent in gardens. Lassoing them into a group in my mind has made it easier to deal with their funky personalities, and so I want to tell you who they are, and my trick to skipping the bull and enjoying them at their best.

-Most hate transplanting- some usually die from it.

-They have significant taproots, often hate being in pots, and hate overwintering in a pot even more.

-They don't emerge until it's freaking hot outside: no-shows of spring but kickass bloomers in summer.

-They are usually big and herbaceous, leaving big old holes when you clean up their great freaking skeletons. A challenge to design with...

-They are too awesome, once in the garden, to give up: They tend to bloom in the worst of summer heat and all will grow without water for me in Western Colorado.

They all look so very different, but if you close your eyes and consider how they behave, I swear they are all the same damn plant.  So who are these rascals?

-Desert Four-o-clock, Mirabilis multiflora.  Many gardeners have noticed that volunteer plants are always tougher than their mom. Probably the least fussy of the lot and comes up a bit earlier.

-Jimsonweed/Moonflower, Datura wrightii, Hardy to say zone 6, it's a classic alley plant in Grand Junction and hardy in hot spots in Denver.

-Bush Morning Glory, Ipomoea leptophylla. This one is rarely in commerce but lives foreverrrrr when it does get a big ol' root down. With flowers like that you know that it's looks are not the reason it's not popular. 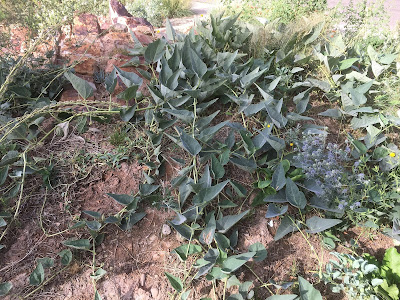 Cucurbita foetidissima is a giant octopus with shark fin leaves - it needs room!

Now, many of us have tamed them into air-pruning pots, bands, whatever, to grow them in the nursery. Some folks are very careful with the fussy roots. I have had good luck taking half or most of the leaves off of newly planted plants to reduce the root stress- it works really well. But there is an even better way.

1. Sow them directly in their spot as seed. (no compost or amendments!)

3. Defend the seedlings from crawling chewing bugs (like with a metal collar made from a beer can) and

4. Water the living crap out of them when it's hot so they grow big and fat and fast to be a nice size by fall to overwinter with big legs and a full belly. (This means a good soak 1-2x a week when it's above 70F, and stop in fall.)

They will come up strong the following season and be a mature blooming plant without supplemental water or bug defense, far outpacing a plant that was planted and may not have overwintered anyway. The other great advantage is that the taproot is allowed to shoot down uninterrupted like a drill and yield a perfect root system with no traumatic history- no need to re-grow the taproot a year after planting.

The challenge designing with them? I'm not sure I have a perfect answer- but simply having room to be placed behind other small shrubs or herbs will hide their spring-empty seats from view. It helps if those plants in front can tolerate shade when the thugs do come up and cast a broad summer umbrella over their neighbors. As for their big dead skeletons, chop them up, stomp on them, or grab them like a giant dead bouquet to haul off in one massive load. If you grow the four-o-clock you know what I mean.

I think the story behind these guys is that most come from light soils whose water drains deeply and quickly (and they chase it with their taproot) and that these plants all specialize on monsoonal summer moisture.  Where I live, summer rains don't always happen, so the native populations don't recruit newbies on those years, like Mirabilis glandulosa. This year of course we are getting hammered with lovely summer rain which has turned the river to mud and is washing away highways like it's California or something, making all the NARGS folks detour on their way to the meeting in Durango next weekend. 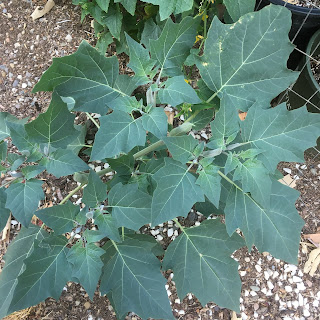 The handsome late July leaves of a datura, in bud, that I sowed in early June.
I feel like there are few more of these kids I forgot to name by species- (help me out and tell me who I forgot) You know how to identify them now and what to do to tame these marvy tigers in your native dry garden.
Posted by Kenton J. Seth at 7:57 PM

Can't resist rising to your bait:For more marvys how about Mentzelias? (M. decapetala for sure if you don't eschew monocarps)--but my fave, M. nuda (http://prairiebreak.blogspot.com/2019/08/steppe-stars-mentzelia-nuda.html). I'd almost put Eriogonum corymbosum, E. niveum and E. compositum in your monster marvy barrel...And Ostrowskia probably belongs there (if we could ever grow it--Vail doesn't count: they cheated somehow). And the giant Central Asian Ferulas. Those are my nominations! Great blog post, btw.

At the moment we can't walk up our entry path because of a hulking M. decapetala whom I can't smite because of the boatload of seed it promises to produce.